We'll start with Packers outside linebacker Za'Darius Smith finally getting a little national recognition. After being snubbed in the Pro Bowl selection process, he's a first-team All-Pro edge rusher in the eyes of NFL.com's Chris Wesseling and Nick Snook.

If Watt has been the most consistent playmaking force at the position, then Za'Darius Smith isn't far behind. Smith led the NFL with 84 disruptions (QB hurry, hit or sack), per Next Gen Stats, recording more games (6) with seven or more disruptions than any other player. As NFL Network tape jockey Ben Fennell recently pointed out, Smith has become the every-down monster that we all expected Jadeveon Clowney to be. While Watt is etched in stone as a legitimate Defensive Player of the Year candidate, the second All-Pro spot has toggled back and forth among Chandler Jones, Shaquil Barrett, Joey Bosa, Nick Bosa, Danielle Hunter or Cameron Jordan throughout the second half of the season. They are all deserving, perhaps none more so than the perennially underrated Jones.

Nick Shook: Za'Darius Smith, Green Bay Packers; Robert Quinn, Dallas Cowboys. This was the most difficult decision to make on the entire roster. Danielle Hunter, Nick Bosa and Brandon Graham each had strong cases, and Myles Garrett likely would've been No. 1 in this group had he not been suspended. But we're going with Smith because of his league-leading 71 quarterback pressures, 13.5 sacks, 60 QB hurries (No. 1 in NFL), turnovers caused by pressure (five, tied for second in the NFL) and his disruption rate of 17.5 percent, second only to Garrett's 18.5 among those who logged 200-plus pass-rush snaps. That combination of stellar production is overwhelming, and it proves the money was well spent on Smith as a key free agent last offseason. 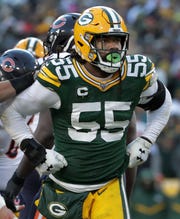 You can check out their entire All-Pro defensive selections here:

.@ChrisWesseling built a defensive All-Pro team with his seasoned eye, while @TheNickShook studied the Next Gen Stats. See where they agree (Aaron Donald) and differ (Grady Jarrett). https://t.co/ABKrgGD5rzpic.twitter.com/EmHbIHr2gX

Packers general manger Brian Gutekunst and coach Matt LaFleur both place in the same position in their respective categories as voted on by The MMQB staff:

2019 NFL awards: @TheMMQB panel votes on winners for NFL MVP, rookies of the year, coach of the year and more https://t.co/tWkwpdjsI3

ESPN's Bill Barnwell breaks down each NFL playoff team and pinpoints their strengths and weaknesses and what has to happen for them to reach the Super Bowl. He also identifies each team's "most quietly important player."

For the Packers, Barnwell writes:

Most quietly important player: Guard Billy Turner has been the most middling member of Brian Gutekunst's free-agent class this season, and the Packers need Turner to hold up in pass protection. Both the Chargers and 49ers were able to get scheme-wrecking pressure on Rodgers by attacking the interior of the Green Bay offensive line. Center Corey Linsley and right tackle Bryan Bulaga also left the Lions game with injuries, and if their absences extend into the divisional round, it could significantly compromise Rodgers' effectiveness and place even more pressure on Turner.

You can read the entire analysis here:

How all 12 teams can win the Super Bowl ... @billbarnwell breaks it all down 📝 https://t.co/qW8QgXMXzh

Raven Greene hopes he can be back in time for the Packers' playoff game:

.@MJD spotlights five pending-free-agent running backs who earned long-term deals with their play in 2019. Plus, he reveals his year-end RB rankings. Who finishes on top? https://t.co/xlAoV4scl0pic.twitter.com/qBSeoPqfcQ

🔥NFL playoff predictions!🔥@TheMMQB staff makes their picks for each round of the postseason and chooses a Super Bowl LIV winner https://t.co/jUPrvXsmS0pic.twitter.com/xJQEQrH6PS

Now that we've flipped the calendar into January, it's never too early for 2020 mock drafts. Check out the Packers' projected first-round selection here:

Our first NFL mock draft of 2020 is out, and it features four QBs in the first round: https://t.co/VJpzBJknj9

Good news for the Vikings:

Dalvin Cook says he will be 'at full strength' for Saints game https://t.co/IdhKwOy0fx

And bad news for the Vikings:

#Vikings drew their worst possible opening opponent in Saints, according to @SouhanStribhttps://t.co/Da4qJDUhhQ

The 49ers' defense could get a postseason boost:

So much for Eliot Wolf's chances of becoming Browns general manager:

So, no Eliot Wolf promotion to GM...
Structure outlined is like what Mark Murphy created in Green Bay in 2019.... https://t.co/WDgh7cFzkX

And finally: A Lombardi-era defensive mainstay has passed away:

Lombardi-era #Packers player Doug Hart dies in Minneapolis. He was 80. He never missed a game in his eight-year career and was on three championship teams.https://t.co/R5DzmQR1Cepic.twitter.com/B1agnsBCQL