We'll start with how former Packers training camp sensation Taysom Hill set an NFL record Sunday, even though his heroics still weren't enough to save the Saints from being upset by the Vikings. 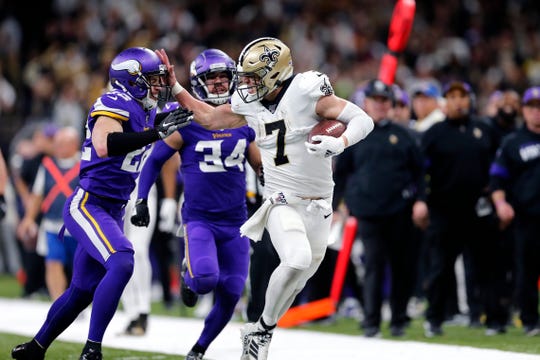 According to NFL Research:

Hill is the first player in NFL history with at least 50 pass yards, at least 50 rush yards, and at least 25 receiving yards in a playoff game. He scored one of the two receiving TDs (20 yards) in the game and had a 50-yard pass. Hill has the same number of career playoff receiving TDs (2) as Hall of Famer Marvin Harrison (2) and Calvin Johnson.

You can read more about Hill (who flashed his athletic potential during the Packers' 2017 camp but somehow failed to make the 52-man roster) here:

Also from NFL Research: How losing a fumble on their opening drive Sunday could be a good omen for the Vikings' Super Bowl hopes:

You can read more statistical tidbits from NFL Research here:

The Packers will face a banged-up Seahawks team, but the Eagles were in even worse shape:

New from JSOnline and PackersNews: Seahawks power ahead in NFC playoffs as injuries weigh down Eagles https://t.co/NHu5qcMFyM#Packers

The Packers must beware of Seahawks defensive force Jadeveon Clowney:

“Carson Wentz was a runner and he did not give himself up. We saw incidental helmet contact, and in our judgment, we didn’t rule that to be a foul.” – Referee Shawn Smith#SEAvsPHIpic.twitter.com/8cmSftm3Ts

Will this line go up or down?

Early Vegas line has #Packers favored by 4 over #Seahawks.

Russell Wilson pulls even with Aaron Rodgers in one measuring stick:

This is Russell Wilson's 9th playoff W, as many as Aaron Rodgers 👀👀👀👀https://t.co/0Pf453bYGwpic.twitter.com/7BkSwyDKYE

The two oldest NFL QBs are out of the playoffs. That leaves #Packers’ Aaron Rodgers (36) to carry the torch for old guys. Next oldest: Tennessee’s Ryan Tannehill (31 years, 5 months).

And this is right on the mark:

Ryan Wood takes a deep dive into the reasons for Rodgers' declining numbers:

We got the stopwatch out for this one. The numbers aren't good for Rodgers on extended plays. https://t.co/IVCqmF9cH4

Pete Dougherty writes about the importance of bringing back kicker Mason Crosby:

For subscribers: Pete Dougherty argues that despite his age and high cost, Packers kicker Mason Crosby has demonstrated he must be re-signed for next season. https://t.co/2z4MWfKAtA

It's a boost the region went without for the last two years as the Packers failed to make the playoffs. https://t.co/zCcyfI8TOE

The Packers were the only NFL playoff team to be ignored in the first-team All-Pro selections:

New from JSOnline and PackersNews: Packers only NFL playoff team without a first-team All-Pro selection https://t.co/TLzPpJCtzB#Packers

Sounds like Za'Darius Smith will be using that as extra motivation:

For subscribers: Unless he has a breakout game, the highlight of Gary’s season will be that he played all 16 regular-season contests. https://t.co/42vIdjD1LC

A look at the off-field artistic creativity of some Packers players (check out the video):

Music, art, fashion: Here's a side to players you don't often see. https://t.co/1WTKhUIubH

Adams recognized Jones’ game-changing abilities in 2017, long before most of his teammates did. https://t.co/TtMOJshRPm

McCarthy had a busy week of interviewing and made a strong impression in Dallas:

“I think he’ll do a great job,” Favre said. “I had him in 1999, and that was basically the middle of my career, and after that year he was gone but then he came back obviously as the head coach. And really a bright mind. Good for a quarterback.

“I think any young quarterback would like him. And he’s very understandable, much like Brian Daboll at Buffalo and Darrell Bevell, guys who are coaching right now, relate to the guys very well. And I think that’s important, on top of his Xs and Os mentality. Obviously he’s had Aaron Rodgers and that certainly helps but I do think he brings a level of toughness, but also a confidence that as a player, as a quarterback for him, you feel confident in the plays that he calls that he’s going to call plays that cater more to your ability rather than maybe a previous guy he had."

You can read the entire item here:

Brett Favre vouches for Mike McCarthy, as McCarthy looks for his next NFL job https://t.co/y3gVdI5eNa

DeShaun Watson's heroics Saturday during the Texans' OT playoff win must have been hard on a certain NFC North general manager:

Seriously how did Ryan Pace watch that game?

It's a boost the region went without for the last two years as the Packers failed to make the playoffs. https://t.co/zCcyfI8TOE