A first look at the Seahawks, the Packers' opponent in their divisional-round playoff game Sunday at 5:40 p.m. CST at Lambeau Field.

Thanks to their divisional rival to the north, the second-seeded Green Bay Packers (13-3) will host the fifth-seeded Seattle Seahawks on Sunday (5:40 p.m. CST) in the NFC divisional playoffs. With sixth-seeded Minnesota upsetting third-seeded New Orleans 26-20 in overtime, the Packers host the highest-seeded opponent left, which is fifth-seeded Seattle. Green Bay last played at Lambeau Field in the postseason on Jan. 8, 2016, when the Packers beat the New York Giants 38-13 to start a run to the NFC Championship game.

Basics on the Seahawks

The Seahawks traveled across the country and beat the NFC East champion Philadelphia Eagles 17-9 in the NFC wild-card round Sunday. The Seahawks got off to a tough start offensively against a feisty Eagles defense, but eventually were able to do enough behind Russell Wilson and Marshawn Lynch to outlast an opponent that lost starting quarterback Carson Wentz in the first quarter.

The key score was a late first-half touchdown run by Lynch that gave the Seahawks a 10-3 lead going into the break. Then early in the second half, Seahawks linebacker K.J. Wright helped hold the Eagles to a field goal in an “and-goal” situation. Seattle responded with a touchdown to take a 17-6 lead and stopped the Eagles twice on fourth down in the final quarter.

Series history with the Packers

This will be the 23rd meeting between the franchises, with the Packers leading 13-9, but it feels like they have a much longer history. Including the playoffs, this will be the sixth straight year they’ve played each other.

They played last season in Seattle, with the Seahawks winning 27-24 less than a month before the Packers fired longtime coach Mike McCarthy. 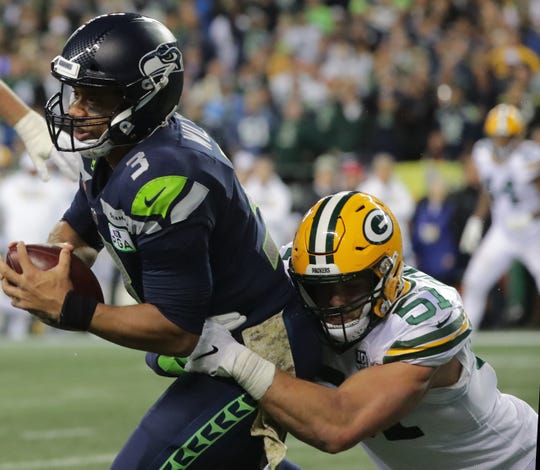 This is the fourth playoff game between the franchises, with the Seahawks beating the Packers 28-22 in overtime in the NFC Championship game on Jan. 18, 2015 after Packers tight end Brandon Bostick mishandled an onside kick attempt. The Packers won a divisional-round game in Green Bay 42-20 in 2008 and 33-27 in a wild-card game in 2004 when Al Harris ran back an interception off Seattle’s Matt Hasselbeck following Hasselbeck’s coin-toss declaration that they wanted the ball and would score. The home team has won the last eight games in the series.

Brian Schottenheimer is in his second season calling plays for the Seahawks and is a branch off of the “Air Coryell” scheme. While that suggests deep-passing concepts, Schottenheimer has a history of strong rushing attacks, including five top-10 run groups in his 10 previous years as a coordinator (No. 1 last season, four times when he was with the New York Jets from 2006-11).

Defensive coordinator Ken Norton is in his second season as well and runs a 4-3 base system. A former position coach during the “Legion of Boom” era with the Seahawks, he has had to manufacture pressures thanks to heavy injury losses up front.

League rank of the Seahawks' rushing offense and number of running backs on injured reserve.

Playoff record of the Seahawks with quarterback Russell Wilson, having won at least one postseason game six times.

Wilson’s regular-season rating, the fifth time it has been 100 or higher in eight seasons.

Regular-season tackles by linebacker Bobby Wagner, including seven for loss.

The Seahawks coaxed the 33-year-old running back and Seattle cult hero out of retirement just before the last game of the regular season due to numerous injuries in the backfield. “Beast Mode” has lost a step and won’t be the linchpin of the offense, but he has shown he has enough left to get key yards when it matters most, and he’s an inspirational leader even now.

The 22-year-old wide receiver out of Mississippi had a solid rookie year, catching 58 passes for 900 yards and seven touchdowns. There are still issues with consistent route running and catching (58% catch rate), but at 6-4 and 229 pounds with a 4.3-second 40-yard dash, he creates all kinds of mismatches in a secondary.

The fifth-year player once led the league in kick-return yardage; he has three career return touchdowns and he can still swing a game in that regard. A tough receiver, he is also Russell Wilson’s top target with 82 receptions for 1,057 yards. He has scored 18 touchdowns on receptions the last two years.

This will be the best team and the best quarterback the Packers have faced in 2019, and the Seahawks have regained some confidence after losing two straight to end the regular season. And oddly enough, Seattle is now 8-1 on the road this season with two victories in Philadelphia and one in San Francisco.

The Seahawks are beaten up on both sides of the ball and are barely hanging together on defense, but yet linebacker Bobby Wagner always seems to make a play when it matters to get them off the field. Wilson will not be intimidated by Lambeau Field or Aaron Rodgers on the other sideline. Like the Packers, the Seahawks are a team that has found a way to win most of the time.

The Seahawks were skidding to end the regular season, losing three of their last four before taking advantage of a worn-out Eagles team. But now, it’s the Seahawks who could be fatigued. They played in Seattle on Dec. 29 (a Sunday night), then flew across country to play in Philadelphia at 3:40 p.m. on Sunday. They then faced a flight back to Seattle, and then one back to the Midwest to face Green Bay. That kind of travel may take a toll.

Wilson’s group comes in as the No. 8 offense in the league, but the run game no longer carries the same pop after the loss of top back Chris Carson and others. Wilson is still too often left having to make something out of nothing when the protection breaks down. The Packers have the athletes to chase and cover, and it could leave Seattle exposed.