Other than Davante Adams, Packers' receivers haven’t caught many passes or gained many yards. But as blockers, they have made plays.

Tom and LeRoy debate how Seattle might defend against Packers like Davante Adams, Allen Lazard and Aaron Jones. Packers News

GREEN BAY – Fourth quarter in Minnesota. Week 16. The Green Bay Packers cling to a touchdown lead when running back Aaron Jones breaks away.

He has a convoy down the left sideline. Four teammates trail Jones as he high steps over the goal line. Receiver Marquez Valdes-Scantling is easy to find. He’s the one raising his right arm, celebrating 15 yards before Jones reaches the end zone.

The box score might show it was Jones’ 56-yard score that clinched the Packers’ first NFC North title in three years, but this was Valdes-Scantling’s touchdown, too.

He made the block.

“To be able to go and seal the deal with that one,” Valdes-Scantling said, smiling a week later as he exited the Packers' locker room at Lambeau Field, reliving that moment, “is kind of the joy that I had.”

There’s been plenty of that joy this season. Especially in December.

Take the third quarter against Chicago. Week 15. Packers expanded their lead on Jones’ 2-yard touchdown run. Before the snap, receiver Allen Lazard motioned in from the slot. He made the block, cordoning Bears safety Ha Ha Clinton-Dix to open a lane. 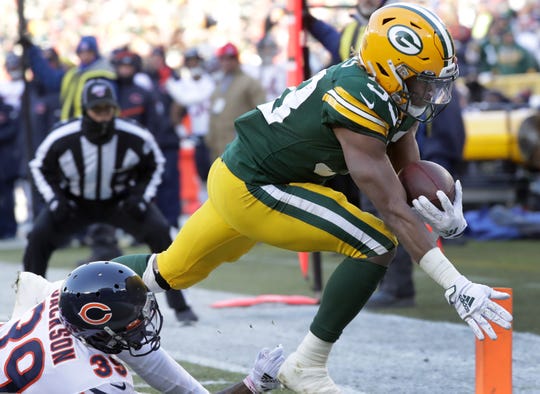 A week earlier, second quarter against Washington. Same thing. Receiver Jake Kumerow motioned in. At the snap, he met safety Landon Collins in the hole. Trucked him 3 yards backward.

Jones got 42 yards on the run. Kumerow made the block.

The Packers' receiving group will get a major overhaul in the offseason. Other than the consistent brilliance of Davante Adams, receiver production has been vacant. For the first time since 1982, the Packers had only one player with more than 500 receiving yards. Nobody reached 1,000.

An NFL receiver’s primary function is to make plays. Usually, that’s by catching passes and gaining yards. These Packers receivers haven’t caught many passes or gained many yards.

As blockers, they have made plays.

That Jones led the NFL with 19 touchdowns is first a testament to him, and second the Packers' offensive line. But he knows how much praise his receivers deserve, especially with how coach Matt LaFleur’s system incorporates them in the run game.

“Even more credit than they’ve gotten,” Jones said. “I feel like that’s one thing that’s overlooked. They take shots off the (running) backs. That’s a big thing to help you last throughout the season. But not only take shots, but open up run lanes. You see a safety coming down full speed, and they’re used to making plays, and out of nowhere they’re just disappearing, and you’re able to run off of a corner, which is what you like to do versus a safety.

“So they make it easy for you, and they don’t get enough credit. They’re doing the dirty work, and they’re team players.”

That cliché gets worn out when Packers receivers explain why blocking has become infectious in their room. “Wanting to win,” Kumerow simply said. Indeed, but that’s always the case, wanting to win.

It doesn’t often lead to receivers so forcefully buying into the less glamorous part of their job.

Lazard was always a blocker. His high school in Urbandale, Iowa, ran triple option. “So all you do is run block,” he said. Lazard mastered the craft since, to the point LaFleur uses him almost as a glorified tight end in certain situations.

Blocking, Lazard explained, is part will, part science. If he’s blocking, instead of running a route, Lazard said he’ll read the defense even more. Where’s the safety? How many in the box? If he’s cracking down on a linebacker or lineman, where are they lined up? How do they come off the snap?

“There’s a lot of stuff that goes into every run play,” Lazard said. “It’s depending on if it’s inside, outside zone run. Tracking the back, what the defense is playing. I do a lot more pre-snap reading in the run game, and for pass game it’s a lot more post snap.”

Even still, blocking assignments can change after the snap. That’s what made his block against the Bears challenging.

As the play unfolded, two defensive backs were in the hole. Lazard had to choose who to block. He started downfield toward one defensive back, but Lazard recognized he was in coverage. In the hole, Lazard adjusted to block Clinton-Dix, who was playing outside.

“That was kind of a hard block,” Lazard said, “and I was able to execute it. I take a bunch of pride in that, and I know the running backs and O-line, it’s not like it goes unrecognized in here. They’re obviously very happy and satisfied, because they’re scoring.”

Kumerow said he needed to learn how to block at his level. As an elite receiver at small-college Wisconsin-Whitewater, opportunities to block were infrequent. Usually, teammates were blocking for him.

For Valdes-Scantling, blocking is less science, more instinct. Over time, a receiver gets comfortable with the technique. More important, he said, is understanding the field’s geometry.

Which is what made his block in Minnesota special. Valdes-Scantling started downfield like he was releasing to run a route. He was inside cornerback Xavier Rhodes, but the run was designed for Jones to bounce outside. So after taking one hard step in, Valdes-Scantling faded to the sideline as he sprinted downfield.

He eventually worked outside Rhodes, sealing him from Jones.

“It’s all about angles,” Valdes-Scantling said. “A guy can be stronger than you, but if you have the right angle and things of that nature, angles beat strength all the time. So just have a pretty good angle, took the right angle, kind of pinned (Rhodes) down, and Aaron did the rest.”

This is the formula as the Packers prepare to host the Seattle Seahawks for an NFC divisional playoff game Sunday night at Lambeau Field. No, the production Lazard, Valdes-Scantling, Kumerow and Allison make might not make much of a dent in the stat sheet. Yes, it would be preferable if it was.

But the members of this Packers' receiving group have been playmakers down the stretch, if unconventionally. They’ve combined with Jones to provide big-play potential to the offense. If the Packers break a big run, chances are a receiver made a block to help it happen.

“I think that’s just kind of who we’ve become,” LaFleur said. “We stress it all the time. we always talk about all 11, and it takes that effort, especially from the receiving corps. It changes the mentality of your offense, and that (physicality) and desire to go out there and put forth that effort for each guy in that locker room, it’s special.”