A perplexing truth about Seattle's second-team All-Pro QB Russell Wilson: The former Wisconsin star is a dismal 0-3 at Lambeau Field.

GREEN BAY - He’d like to forget his last winter trip to the state that put him on the football map. Tuck it away, leave it in the past, then flush the memory.

It wasn’t that Russell Wilson was bad the last time he traveled to Lambeau Field late in a season, combating the frozen tundra. The Seattle Seahawks quarterback could do nothing right. Jimmy Graham, then a Seahawks tight end, slipped on a route before Wilson’s first interception. Two picks bounced off open receivers’ hands. Yet another bounced off a Packers cornerback’s shoulder pads, into the hands of a teammate.

By the end, the Green Bay Packers had a 38-10 win, and Wilson had perhaps the worst statistical game of his career. His 43.7 rating might not have been a career low, but his five interceptions were the most he has ever thrown in a game.

Wilson threw only five interceptions in all of 2019. He did it in 60 minutes against the Packers on that December afternoon.

No, he doesn’t want to think about that this week.

And yet it’s unavoidable. There’s a perplexing truth hanging over the second-team All-Pro quarterback as he prepares for his return trip to Wisconsin for an NFC divisional round playoff game Sunday. Wilson, the former Badgers star, has been dismal at Lambeau Field.

In three career games inside the Packers' home stadium, Wilson’s passer ratings have been 69.7, 43.7 and 91.8. The Seahawks have lost all three. If they lose a fourth, the Packers will advance to next weekend’s NFC championship game. 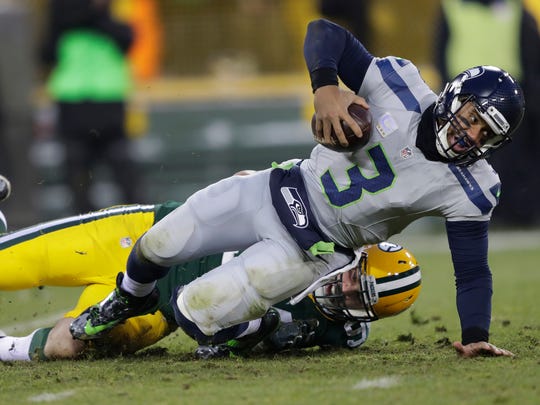 Wilson’s cumulative 60.4 rating inside Lambeau Field is 34.07 points lower than his rating in four games against the Packers at CenturyLink Field in Seattle. He hasn’t been perfect at home against the Packers — a forgotten piece to the 2014 NFC championship game is that Wilson tossed four interceptions — but has posted a passer rating of at least 99.3 in three of the four, including a pair of 110s.

Wilson isn’t alone. Nobody on either side is all that interested in addressing his track record at Lambeau Field. Defensive coordinator Mike Pettine practically had a 15-minute lovefest when he spoke with reporters this week. Best not to poke a sleeping bear.

It’s common for quarterbacks to prefer certain stadiums over others. Aaron Rodgers has felt this. Over the years, Rodgers said, he has found Seattle and Kansas City to be particularly difficult stadiums because of the noise. Chicago, he said, is always treacherous for the weather, and what a cold day off Lake Michigan does to that Soldier Field grass.

Wilson’s rating at Lambeau Field is substantially lower than on the road at any of his three NFC West rivals. His passer rating dips on the road against the San Francisco 49ers (21.58-point decline) and the St. Louis/Los Angeles Rams (16.72), but hardly the precipitous fall from Seattle to Green Bay. His passer rating actually increases 23.36 points when playing the Arizona Cardinals on the road, inside the environment-controlled University of Phoenix Stadium, instead of at home.

Carroll is right, of course. Wilson, consensus first-team Big Ten, indeed played pretty well at Wisconsin. And it’s not like his struggles at Lambeau Field were directly tied to the weather. Two of the three came in September.

To hear Pettine describe Wilson’s game, you’d think he’s indefensible. Pettine, who consulted with the Seahawks in 2017 before being hired as the Packers' defensive coordinator, said Wilson “probably throws the best deep ball in the league” while also describing him as borderline impossible to tackle.

“We talk to our guys,” Pettine said, “about defending both plays — the intended play that they called in the huddle, and then the extended play. We always tell them, as much as we don’t want it to happen, we always have to assume he’s going to make the first guy miss. He’s probably the best at it. And their receivers, because they’re used to it, they do such a good job uncovering late in the down, knowing he’s out and where am I headed.

“So that’s the frustrating part. I told our guys, ‘Prepare to run more this game. The GPS tracker numbers are going to be through the roof because you’ll run more in this game than probably any other game we’ve played,' because that’s the nature of it, that he extends plays so well.”

Wilson, now 31, is perhaps at the top of his game. He’s the same age as Rodgers was in the 2014 NFC championship game, when the Packers quarterback had one of his finest seasons and won MVP. Wilson was on the short list of contenders for the award this year. “If it wasn’t for Lamar (Jackson) running away from it,” Packers safety Adrian Amos said, “he’s an MVP candidate as well.” A second-team All-Pro nod will have to suffice.

“If he couldn’t run,” Amos said, “he would still be a good quarterback. But that he can run, it adds that other dimension.”

His success has extended to the road. The Seahawks are 8-1 away from Seattle this year, including last week’s NFC wild-card win at Philadelphia, in large part because of Wilson.

Still, the question dangles out there: Can Russell Wilson win at Lambeau Field?

“I know the record here,” Pettine said, “but that means nothing at this point.”

The Edge: A comparison of several offensive and defensive regular season stats between the Green Bay Packers and Seattle Seahawks ahead of their NFC Divisional Game. Milwaukee