Aaron Rodgers has had his ups and downs, but feels there is a character to this team that could lift his play to its peak against the 49ers.

GREEN BAY - In the 11 years and 16 playoff games past it was a definite expectation and a near certainty that Aaron Rodgers would play well when talking about the Packers’ chances to win in the regular season and advance in the postseason.

Interestingly, in a year that has unfolded with the team’s most victories since 2011, that has not necessarily been a given. Instead, Rodgers has played the role he has been asked to play — which often has left him being part of the equation as opposed to the absolute answer.

After Week 1 in Chicago, he told his new head coach he would play better. He did the next week against Minnesota (64% completions, 101.2 rating, 2 TDs).

The Packers aired it out for the first time in Week 4 against Philadelphia but after two turnovers and multiple failed shots into the end zone led to a loss, Rodgers followed it up in Dallas with a game he called his best of the year despite no touchdown throws and a modest 7 yards per attempt. 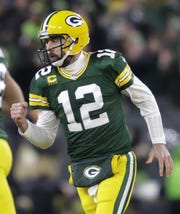 “The way that I was moving and seeing things,” he said afterward. “I’ve accomplished a lot statistically in this league. I just want to win now.”

There was a statistical milestone reached two weeks later. He had his first perfect day against Oakland on Oct. 20 — a 158.3 rating after going 25-for-31 (80.7%) for 429 yards, five touchdown throws and one touchdown run.

For the bulk of the season, however, Rodgers’ brilliance came through in spots.

The play extension and impossible touchdown throw to Jamaal Williams in the back of the end zone in Kansas City. The fourth-down conversion in the snow to Geronimo Allison in New York, the third-down conversion to a sliding Allison’s back shoulder against Seattle. The drops in the bucket to Davante Adams against Philadelphia and Seattle. The pea to Allen Lazard on the sideline in Detroit.

“I just think when you look at all the clutch throws he’s made, especially in those crunch-time situations, he hit two on the last drive last week,” Packers head coach Matt LaFleur said Wednesday. “You go back to Detroit, there were a bunch of clutch plays just trying to get us back into that game. So it’s been just his ability to make those plays in those critical situations.”

After the team’s worst showing of the season the first go-around in San Francisco, Rodgers perhaps tried to speak steadiness into existence.

“Offensively, I’ve got to take the lead and get hot in December here,” he said Nov. 27.

But over the final five games of the regular season — all victories — the passing game couldn’t be characterized as flaming. Rodgers completed 57% of his throws for 1,180 yards and eight touchdowns against two interceptions (85.4 rating).

“I was hot in a couple of 'em,” he said Wednesday with a smile. “My job … is different year to year. It’s about being efficient and taking care of the football and making the right checks. Those are so important for us, getting in the right plays. I think there’s been times where I’ve been ... felt super locked-in in games and maybe not as locked in based on the week of preparation. The last six weeks I’ve felt really locked in on the preparation and I think that’s helped us on offense to really be on the same page.”

Of course, Rodgers isn’t throwing the ball to himself.

An overall lack of explosiveness out of the pass-catching positions and an emphasis by defenses to corral Aaron Jones have created issues. And for every unspoken route adjustment that can lead to a big play to Adams, there have been missed connections with others.

But the personnel and the playbook aren’t changing. They are who they are.

“I think if you’re spinning it the right way, it’s just different opportunities for guys,” Rodgers said mid-December. “I think every week we’re putting guys in situations to have opportunities, and then based on the result or the performance or the efficiency, different guys get different opportunities week-to-week. And that’s kind of how it’s been as you guys have pandered about what the identity of the team is every week. And I think we’ve all settled on that it’s Aaron Jones and Davante Adams, I guess.”

To a man on offense, the Packers felt Rodgers was sharp and a difference-maker Sunday against Seattle. He didn’t throw often (27 attempts) or complete a ton (16), but he connected with seven different players and averaged nine yards per attempt. He also threw two touchdown passes for a 113.7 rating.

There was more magic more often, even if the raw stat line was more congruent with the previous nine games than not.

“There’s certain things that quarterbacks can do to win games and it’s not always having the stats that are really good for fantasy and make you stick out,” 49ers coach Kyle Shanahan said. “I think Aaron’s been finding that fine line on it, even last week, those two plays he made on third down at the end to not give it back to Russell (Wilson) and the Seahawks, those were unbelievable plays that not many people can do and that was the difference in winning and losing was just two plays, to me. Aaron’s capable of doing that all the time, it’s just what type of game is it?”

Sunday in San Francisco, however, the Packers may need more than a handful of big pass plays — they’ll need several. And perhaps for the first time in his career Rodgers is more of an “X factor” in that way.

Some opponents have clearly played in a way that showed they felt Jones was a bigger priority and some, like Washington’s Jon Bostic, were bold enough to say it. Rodgers’ response to such a game plan was simple:

And the 49ers will do that. They shut down Vikings running back Dalvin Cook to get after Kirk Cousins last Saturday, sacking him six times while allowing just 5.9 yards per attempt. They finished the regular season as the No. 1 pass defense in the league and had 48 sacks.

This puts Rodgers in a unique position.

This will be his fourth championship game, which is the most of any of his contemporaries in the NFC. It is the second-most in the conference for quarterbacks since the turn of the century, behind only Philadelphia’s Donovan McNabb (five). When the game ends, only Tom Brady and Ben Roethlisberger will have more experience in such games among active quarterbacks.

Sunday also will be Rodgers’ fourth conference title game on the road, and they haven’t been easy. He is 63-for-109 (57.7%) for 709 yards with four touchdowns and five interceptions for a rating of 70.5. And of course, the Packers have just one victory.

It has created an intersection of experience and heightened external expectation. Rodgers freely speaks on legacy, both from an organizational and league standpoint. Last week he acknowledged to thinking about a second Super Bowl trip daily, realizing the combination of his age and the vagaries of every NFL season may not present this chance again.

But with his experience over his career and after 14 wins this season by an average margin of essentially one possession — 8.3 points — he feels there is a character to this team that can perhaps lift his play to its peak against the 49ers.

The Edge: How the Green Bay Packers and San Francisco 49ers matchup in several key categories based on regular season stats as they head into the NFC Championship Game. Wochit