The Packers say their locker room felt no different after the win over the Seahawks than it did in any of the previous weeks.

GREEN BAY - The message from the Green Bay Packers coaching staff to begin the playoffs was to keep things the same as the regular season, on an emotional level and during the day-to-day preparation. It was a formula that resulted in 13 wins, so why deviate? It’s why the practice week has remained the same, as has the travel schedule to the West Coast with a Saturday departure for Sunday's NFC championship game.

At least for one game, it worked. Tramon Williams noticed that after the 28-23 divisional round victory over Seattle, the locker room felt no different than it did in any of the previous weeks. There was no over-exuberance. And through the opening half of the week with a larger media contingent and the greater off-field demands for time — coupled with the way the Packers lost at San Francisco in November — the team feels it has kept its heart rate steady.

“I think a team takes on the attitude of the head coach and the leaders first and foremost,” Packers quarterback Aaron Rodgers said before noting the emphasis on keeping the feel normal.

“The problem is when you make it bigger than it needs to be, when you try to do too much, when you try and cover for somebody else in your own mind, or make up for something that you think needs made up for. That’s when the mistakes happen. I think if you look at this game, they’re definitely favored by what, seven and a half? Is that right? They’re obviously expected to hold court and win. People know and they’re talking about how we played the last time so I think if they look at pressure, the pressure is in a certain place and we should be nice and loose.” 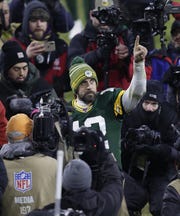 And despite being the No. 2 seed and tying the 49ers with a 13-3 record in the regular season, that message has filtered through the locker room.

“We’re the underdogs,” Aaron Jones said. “We’re playing in California. We know what happened last time, so we feel like they’re probably a little confident but hey, we know what we need to do, so we’re just gonna be worried about ourselves.”

There is plenty of playoff experience in the locker room, and the message has been received by those whose postseason résumé now only includes last week’s game against the Seahawks.

“We can only do what we can do,” cornerback Kevin King said. “Not try to take on the burden of past years and past teams. I ain’t been to the Super Bowl. I ain’t been to the playoffs yet. So if I try to take that — even going back to last week's game. It’s a whole bunch of things that go on with Seattle and Green Bay. But I haven’t been a part of that. Actually I was more on the Seattle side being a (Washington) Husky the whole time, I saw that from the Seahawks' point of view. So really not trying to make things bigger than what it is.

“It’s a game. Going back home to the Bay. Get a chance to play against a team, a game that got away from us. Second chances like that, everybody sees the intent of it.”

Mike Pettine knew about his defense’s players-only meeting that followed the Packers’ return from San Francisco in November, but he might have helped encourage it a little.

Asked what he thought of his players deciding to watch film of the explosive plays they’d allowed through the season’s first 11 games, Pettine deadpanned: “Because I told them to.”

He quickly backtracked, but it’s easy to envision Pettine having some choice words for his defense after its drubbing at the 49ers. The 37 points the unit allowed that night were its most all season, and also a climax to issues that had plagued it for weeks. Pettine said “we were all accountable,” and that he and his staff had deficiencies too, but that the players’ decision to meet and discuss what needed to be fixed was a sign of maturity.

“We just reached the point,” Pettine said, “where we were like, you know what? We’re not going to make any assumptions.”

Pettine said the meeting helped knock down barriers that had impeded miscommunication. He said there’s still room for improvement, but the defense has functioned better since the letdown in San Francisco.

It’s how Pettine likes his defense to function, with different positions understanding the other parts of the system.

“Every group can hear how the other group is being coached,” Pettine said, “so there is accountability in that room. I’ve never liked to put those positions in silos with a wall between them; hey, that’s next door, they should have been doing that. If there’s an issue that comes up, we air it. I think that’s the only way to do it. It helps the players too when they understand that everybody is being held to the same standard.”

The Edge: How the Green Bay Packers and San Francisco 49ers matchup in several key categories based on regular season stats as they head into the NFC Championship Game. Wochit