Aside from Davante Adams, the Packers' receiving corps did not have a good year.

Tom breaks down the issues the Packers’ defense had against the 49ers. Packers News

GREEN BAY - Before Green Bay Packers coach Matt LaFleur filled a coaching void on defense, he created one on offense.

The Packers did not make an announcement of Whitted’s dismissal or the departure of secondary coach Jason Simmons, who accepted a job with the Carolina Panthers.

They did, however, announce the hiring of Jerry Gray on Monday after PackersNews reported that the former Minnesota Vikings secondary coach would replace Simmons. Those are the only staff changes LaFleur has made since the Packers lost in the NFC championship game Jan. 19.

Aside from Davante Adams, the Packers' receiving corps did not have a good year. 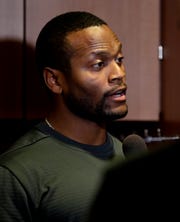 No one performed consistently enough to take pressure off Adams and veteran Geronimo Allison and second-year pro Marquez Valdes-Scantling both regressed.

Adams led the team with 83 catches for 997 yards and five touchdowns during the regular season. Running backs Aaron Jones (49) and Jamaal Williams (39) and tight end Jimmy Graham (38) had more receptions than the No. 2 receiver, Allen Lazard (35).

Most shocking was the decline of Valdes-Scantling, who had a solid rookie year and was in line to be a starter all season. But a combination of drops and poor route running put him in the doghouse and he finished the season with 26 catches for 452 yards and two touchdowns.

In the final nine regular-season games, Valdes-Scantling had five catches for 36 yards.

Allison also had a disappointing season, finishing with 34 catches for 287 yards and two touchdowns. Over the final eight games, he had 16 catches for 103 yards.

Jake Kumerow had some big plays during the season but saw limited playing time and finished with 12 catches for 219 yards and a touchdown. He received more snaps when Valdes-Scantling fell into his midseason funk.

Lazard was the only receiver who got considerably better. After starting the year on the practice squad, he took advantage of his move to the 53-man roster by being the most reliable target quarterback Aaron Rodgers had after Adams.

He finished the year averaging 13.3 yards per reception with three touchdowns.

General manager Brian Gutekunst is expected to use free agency and the draft to build up the receiver position this offseason, so LaFleur will need someone to help develop the talent. It’s possible Gutekunst could add three receivers from the draft because it is one of the deepest drafts at the position in many years.

LaFleur, who is attending Super Bowl LIV to be with his brother, Mike, who coaches for the San Francisco 49ers, will probably start interviewing candidates next week.