Olivia Reiner and Ryan Wood examine Aaron Jones and Jamaal Williams' workload in 2019 and discuss Jones' potential as a workhorse in 2020. Packers News

We'll start with John Breech of CBSSports.com examining each NFL team's 2020 strength of schedule and finding that coach Mike McCarthy's Dallas Cowboys have the least-demanding slate in the NFC (and third-easiest overall), based on their opponents' combined 2019 winning percentage of .459.

If you're looking for a team out of the NFC that could have a big 2020 season, don't be surprised if the Cowboys put together a solid year. In his first year as coach in Dallas, Mike McCarthy and the Cowboys will be facing an SOS of .459, which is the least difficult in the NFC. Basically, now might be a good time to jump on the Cowboys bandwagon, and the good news is, if you do jump on now, you'll be there before most actual Cowboys fans, who only jump on when the team is winning. 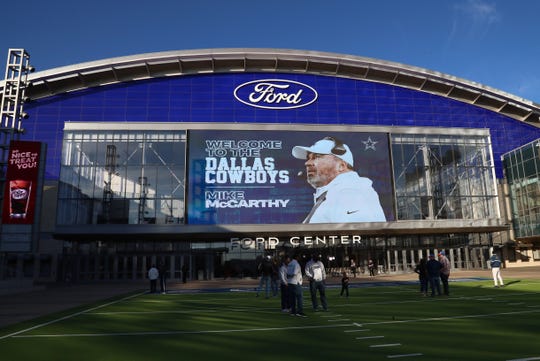 You can read the entire story with each team's SOS here.

Packers running back Aaron Jones is in an unenviable position when it comes to cashing in on his success:

For subscribers: Whoever said running backs need their own union was right. https://t.co/a41ohzoiWc

Use the franchise tag to keep right tackle Bryan Bulaga in Green Bay? Um, no ... it would be way too expensive, but NFL.com's Gregg Rosenthal nonetheless makes an argument for it in his story projecting likely tags:

Bryan Bulaga, OT, Green Bay Packers: Bulaga enjoyed a strong bounce-back season in 2019. I've gone back and forth on this one, but it just doesn't make sense to allow a quality right tackle to leave when the team has the cap space to afford him.

Tag! Who's it? @greggrosenthal explains the difference between the franchise and transition tags -- and identifies the players who are most likely to receive one of the two designations in the coming weeks.https://t.co/nB7zZYmBuspic.twitter.com/6n28qaXgGW

One of the better mock drafts comes from SI.com's Kevin Hanson, who has the Packers drafting a linebacker from national champion LSU at No. 30:

A pair of Packers linebackers—Blake Martinez and B.J. Goodson—are set to become free agents. Queen is a three-down linebacker with outstanding speed and coverage skills, who played his best football down the stretch.

Mock Draft 4.0: @EDSFootball has Justin Herbert going No. 6 to the Chargers https://t.co/onTjUnPDcx

And here's a roundup of some other mocks:

There is a wide variety of players being suggested by mock draft writers around the web. #Packershttps://t.co/Dxm4Mkqkwv

Likely first reaction from Packers fans to news that Drew Brees will be back as Saints quarterback:

Will star quarterback Taysom Hill have to wait to play?

And of course, there's the what's-next analysis:

Drew Brees is back, and he'll count a big number on the #Saints cap once they strike a deal for 2020. How does that affect how things play out with Teddy Bridgewater and Taysom Hill? @nflnetworkpic.twitter.com/XFgNyW7gHY

The Lions could look to trade star cornerback Darius Slay:

Richard Sherman: Darius Slay “doesn’t get enough credit and that’s, once again, the market he’s in and sometimes the team doesn’t have a lot of success. ... I have the utmost respect for his game and I enjoy watching him play.” https://t.co/EEginlRFIM via @freep

Count Kurt Warner among those in Mitch Trubiskey's corner:

And finally: Join Pete for his weekly chat Wednesday at noon CST: