We'll start with Pete Dougherty fielding a question Wednesday in his weekly live chat about whether Packers quarterback Aaron Rodgers is too tough on his receivers and would a rookie like the Seahawks' DK Metcalf have thrived playing with him.

Look, it's true that Rodgers' body language is an issue sometimes, and I don't doubt that on game day he's at times tough to play with. But I've read a lot about Brady being very exacting with his receivers, too. I remember reading that when Rich Gannon was winning the MVP with Oakland way back when, he was an SOB to his receivers. I think a lot of these top veteran QBs expect a lot from their receivers -- in part, I wonder if they forget what it's like to be young and not know the offense as well as they do now. But they're used to winning and want things done right, too. I strongly suspect Seattle didn't ask Metcalf to do things he wasn't ready to do, which helped him make an impact. Probably limited just how much he'd do as a rookie, but got the most out of him under the circumstances. Long and short of it is, Rodgers can't carry the team like he used to and needs more talent around him than he's had the last couple years. 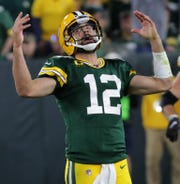 Packers quarterback Aaron Rodgers reacts after throwing an interception in the end zone during the waning moments of a 34-27 loss to the Philadelphia Eagles on Sept. 26, 2019 at Lambeau Field. (Photo: Mark Hoffman/Milwaukee Journal S)

You can read the rest of Pete's chat (which lasted more than 2 hours and covered a multitude of Packers topics), here:

Is Brian Gutekunst's faith in Oren Burks warranted? Pete discusses that and other reader questions. https://t.co/XcCAbufti3

Rodgers joined those voicing their opposition to the proposed CBA:

One of the proposal's opponents is none other than Packers quarterback Aaron Rodgers. https://t.co/Vu1gFLm6Hl

And 49ers cornerback Richard Sherman chimed in as well:

Health and Wellness of our men is always the most important aspect. There is no price you can put on that and that is why I Voted No. I respect the Men that have been part of this discussion and stood up for their locker rooms. https://t.co/mL0Yj3E6d9

Here's an overview of the CBA details:

Where do things stand with the current proposed NFL collective bargaining agreement?

A primer on everything you need to know: https://t.co/sRcRnF3Cop

Getting lifetime health care for NFL players is no easy matter:

No lifetime healthcare for NFL players? It wasn't even on the negotiating table.

That's because the NFLPA couldn't find an insurance company willing to write the policy.

"No one would even give us a number,” a source told @NBCSNorthwest.

The voting process won't be rushed:

.@NFLPA president Eric Winston said here in Indy that the union has not yet set a full-player vote date on the CBA. Said he would not publicly campaign for yes votes and won’t rush process:
“I have said repeatedly that there will be white smoke when there is white smoke.”

When it's all said and done, will you be ready for some football?

Could a Monday night playoff game be coming to the NFL? It's apparently something that could happen once the postseason is expanded to 14 teams #NFL#WednesdayWisdomhttps://t.co/HVJqN1643ppic.twitter.com/ufXbRdQuO4

Former Packers coach Mike McCarthy met with the media Wednesday at the NFL scouting combine and said he hopes to coach Randall Cobb again with the Cowboys:

McCarthy rediscovered his sense of humor during his year away from the NFL:

Mike McCarthy, back in action: “I never thought I’d say this, but it’s good to see everybody here.” pic.twitter.com/rmTQ5yMyKW

ESPN's Rob Demovsky pinpoints what, in his view, is the Packers' biggest draft need:

Receiver. GM Brian Gutekunst couldn't hide the fact that he needs another pass-catching weapon -- or two -- for Aaron Rodgers. He admitted that he tried to make a move for one at the trade deadline last season but couldn't find a deal that made sense. Even if the Packers don't take a receiver in the first round (they haven't since Javon Walker in 2002), this receiver-rich draft class could produce immediate starting-caliber players in Rounds 2 and 3. More positions to watch: ILB, OT, TE -- Rob Demovsky

You can check out each team's biggest needs here:

Top draft need for all 32 NFL teams, plus prospects to watch at the combine https://t.co/QNhNtfWNuy

The Packers certainly played a big part in this:

What's become clear this week at the NFL combine: The #49ers, a recent train wreck, are now trend-setters.https://t.co/4sorBNYfDopic.twitter.com/WYtafAmbVL

And finally: Good news for the Vikings: