Six to eight receivers could go in the first round, but diversity and depth at the position will provide plenty of options.

INDIANAPOLIS – If Green Bay Packers general manager Brian Gutekunst wants to pick a wide receiver in the NFL draft this year, he may be asked this:

The 2020 NFL receiver class is deep, probably better and deeper than 2014’s, which some argue is the deepest of all time.

There are probably six to eight receivers who could go in the first round this year, but the diversity and depth throughout the draft will allow teams to be picky.

“The draft class is incredibly strong,” San Francisco 49ers general manager John Lynch said at the scouting combine this week. “This is my fourth combine and this is as good as I've ever seen – the depth of it, the top-end players. It's a really good class. 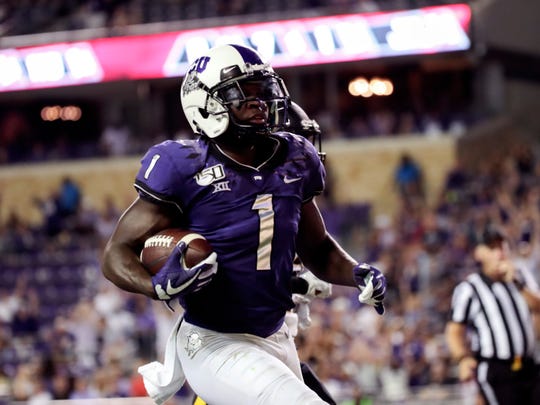 If the Packers don’t select a wide receiver in this draft, it will be because Gutekunst traded all his selections for the right to draft LSU quarterback Joe Burrow. Since that’s not going to happen, Gutekunst and his scouting staff are going to use at least one of their 10 picks on a receiver.

If this were any other year, Gutekunst probably would lean toward a big receiver who has great speed (think Marquez Valdes-Scantling), great strength (think Allen Lazard) or a big wing span (think Equanimeous St. Brown).

He might be able to get combinations of those skills in this group. The common denominator among most of the 2020 prospects is speed.

None of the prospects had run the 40-yard dash here as of Thursday afternoon, but many of them were expected to run it in 4.4 seconds or less. It’s the reason that five or more receivers could be off the board before Gutekunst even gets to take a swing at one.

It’s possible one or two in that group might make it to No. 30, but chances are Gutekunst will be picking from the next tier of receivers. Fortunately for him, there are diverse choices beyond the first round.

“I’ll be really interested to get through this week and see how they perform through the workouts and stuff,” Gutekunst said. “But I think this is a little bit deeper class, maybe, than it has been in the past. So, I think if you’re looking for something specific, all types are out there.”

Depending on what he does in free agency, Gutekunst has Adams and a group of guys who need to be challenged for roster spots. Lazard, Geronimo Allison, Valdes-Scantling and Jake Kumerow didn't provide the offense enough juice opposite their franchise receiver.

The prospects who are on the bubble for the first round offer similar options.

Gutekunst could find himself with any one of those receivers on his board when his pick comes up in the first round, but the beauty of this draft is that he isn’t out of luck if he doesn’t see value in taking one at No. 30. One scout said there will be receivers in the second and third rounds who will come in and play right away.

“We talk about this every year,” Indianapolis Colts general manager Chris Ballard said. “I believe at every level of the draft you can always find players. People are always going to pick it apart and say there’s a strength and a weakness.

“Do I think it’s a special receiver draft? Yeah, I think there’s a lot of depth in the wide receiver position. But I think when you look and you dig, you’re going to find somebody who can help your team at every level.”

There are certainly some interesting prospects that Gutekunst will have to consider beyond the top five or six.

Reagor may only be 5-11, but he put on 10 pounds after last season and if he’s still able to run in the 4.3-second range in the 40-yard dash (he was timed at 4.47 Thursday night), he could have Tyreek Hill potential. At least, that’s who he’d like to resemble.

"(Hill's) versatility, his size, very quick receiver, very fast,” said Reagor, who added that he met with the Packers for an official visit. “You can use him anywhere on the field. You put him in the backfield and he can just do everything, and when you can do everything in the NFL, you're pretty valuable."

Aiyuk was a big play waiting to happen at Arizona State. He caught 66 passes and averaged 18.8 yards per reception. He’s fast, but he’s more like a running back who excels after the catch. He averaged 31.9 yards on kick returns and 16.1 yards on punts.

“I take a lot of pride in returning kicks,” he said. “My first year, when I wasn’t starting at receiver, I was returning kicks, and this last year I still returned kicks even as a No. 1 receiver, just because it’s another part of my game that adds value to me.

If Gutekunst prefers big receivers, Mims or Jefferson could be options. Neither one is a speed burner, but at 6-3, 207, Mims, who caught 66 passes for 1,020 yards and 12 touchdowns for Baylor last year, might be able to get free in the middle of the field.

"My favorite route is the slant,” Mims said. “I love going across the middle and catching the ball and make someone miss."

Jefferson ran every route in the book for LSU and had off-the-chart production. He caught 111 passes for 1,540 yards and 18 touchdowns last year. He also had the pleasure of playing with Burrow.

“My ability to get in and out of routes, I’m very versatile,” Jefferson said. “I can do slot and outside, just being able to play different positions on the field.”

Whether it’s speed, height, size, production or any combination of those traits, Gutekunst will have options. Picking the best guy is all he must do.