Packers Morning Buzz: Why trading for Odell Beckham Jr. would be a 'daring' move

Packers Morning Buzz: Why trading for Odell Beckham Jr. would be a 'daring' move

“I’m kind’ve into it.” - @danorlovsky7 breaks down a Packers trade for OBJ scenario.

ESPN projects some "daring" offseason moves including the potential of @OBJ going to the #Packers#PatMcAfeeShowLIVEpic.twitter.com/tHweBAvqSg

This was Dougherty's response:

It would be a daring move, but I'm inclined to think Gutekunst won't think Beckham is worth the trouble. He's a very talented guy, no getting around that. He's also really, really high maintenance, and I'm guessing Gutekunst doesn't want to bring that into a harmonious locker room at the trade and contract cost that it would take. He's due $14M this year, and the Packers aren't swimming in cap space. So I have a little trouble seeing the Packers making that move. Then there's the possibility that with a new team he'd want a new contract. I don't know if an R2 would get it done. I'd think not, but I'm not sure what the new regime in Cleveland thinks about him. 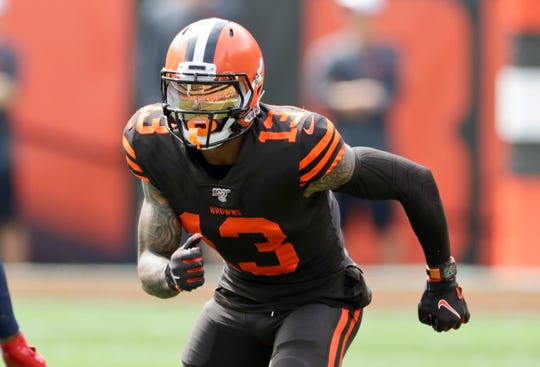 You can read the rest of Pete's chat (which lasted more than 2 hours and covered a multitude of Packers topics), here:

Did you miss Pete's chat? Check out the replay here: https://t.co/ZStaOcju3f

It seems OBJ also has been chosen to help model the Browns' new uniforms:

Baylor wide receiver Denzel Mims has become a popular mock-draft pick for the Packers after his eye-opening effort at the scouting combine:

More analysis of Mims and other top receivers (with combine workout highlights):

.@CharleyCasserly’s takeaways from the WRs at the 2020 #NFLCombine 🏈👇

The first in our series on the Packers' unrestricted free agents features kick returner Tyler Ervin:

It is rare that a single special teams player's impact can be so vivid, but that is what the #Packers got when they acquired Tyler Ervin. https://t.co/Olm24w52AW

I started talking Rodgers' stats, including passer rating, with LaFleur at the Scouting Combine last week. He was having none of it.https://t.co/bFwv0SbavS

A detailed look at the CBA and some of the changes that fans will notice:

NFL players soon will vote on a new CBA proposal. Here's a detailed look at what's actually in it, beyond just the 17 games and expanded playoffs: https://t.co/G9hONLoyXu

Former Packers executive Andrew Brandt puts the proposal under the microscope and has this to say about the players agreeing to a 17th game: "The Players needed to use that valuable chip for optimal gain. In my opinion, they have not." Read the entire analysis here:

Took a deep dive into proposed 11-year CBA between NFL Owners and Players. My analysis: https://t.co/DgsOVapLTq

What could TE Austin Hooper bring to Packers offense? https://t.co/o5qCPlZV7y

NFL.com's Adam Rank presents his list of 11 untradeable players for 2020 and from the Packers he has .... no one?

Can you imagine the Panthers without Christian McCaffrey? Or the Saints without Michael Thomas? Neither can @adamrank. Check out who makes his list of untradeable players for the 2020 season.https://t.co/Q0QNMilfgrpic.twitter.com/3n9UJ8YeKv

#Packers move to increase participation in the Brown County game-ticket lottery. They cut back tickets from 4,000 per game to 2,500 in recent years. https://t.co/HOExBBSWeApic.twitter.com/1ppimvoWKq