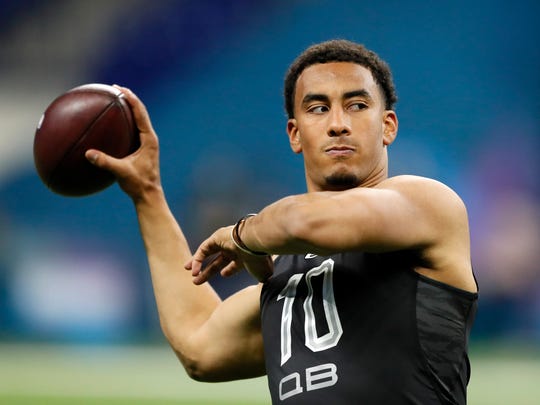 GREEN BAY - It seems like a stretch, the idea that the Green Bay Packers could seriously consider drafting a quarterback in the first round this spring.

General manager Brian Gutekunst doesn’t speak much about windows, but there certainly is precedent. Now is the time a team with the great fortune of living life with a franchise quarterback starts thinking about what comes next. And if the right quarterback should fall to the Packers at 30th overall in the first round, Gutekunst has said he has no qualms about drafting him.

The question: Who would be the right quarterback? And while Gutekunst wouldn’t show his cards, it’s easy to see why the Packers might be intrigued with a prospect such as Utah State’s Jordan Love.

In the new-age NFL, where quarterbacks beat defenses with their legs almost as much as their arm, Love is the total athletic package. Even if Love’s production regressed as a junior in 2019, with a new head coach and little supporting cast, these decisions aren’t based on the past. This is a projection of what Love can become, given that 6-4, 224-pound frame, 4.74 40 time and arm strength that can make any throw, and he has used a strong NFL scouting combine to scale draft boards.

The Packers planned to bring in Love for a pre-draft visit before those were canceled due to the coronavirus. They reportedly are among the teams that have conducted virtual interviews with Love.

Most mock drafts have Love gone long before the Packers are on the clock. Then again, Aaron Rodgers was supposed to be long gone, too. You know how that turned out. Could history repeat itself? That’s yet to be seen, but Gutekunst is willing to consider the idea if the right quarterback falls.

Pro Football Focus analysis: In 2018, Love was pegged as a breakout player for 2019 and received first-round hype. Love finished 2019 with a passing grade that ranked 41st among FBS quarterbacks and failed to show up during Utah State’s two games against Power-5 competition. Love’s decision-making was questionable throughout the year, and he ended up ranking 101st in turnover-worthy play rate. He could hit an open receiver 20-plus yards downfield with ease, and that’s precisely the concerning part of his overall play. Most of Love’s best throws came in favorable situations, but when throwing into tight windows, he led the FBS in interceptions. His pocket presence was great at Utah State, but he failed to show he can truly create something out of nothing with his accuracy.

Draftniks say: “Jordan Love is a smart, athletic, strong-armed quarterback who struggled with turnovers on a bad Utah State team in 2019. With a new head coach and most of his weapons gone, Love forced his way to 17 interceptions. But teams are falling for his arm strength and ability to make off-schedule throws and win while on the move. As the NFL continues to evolve at quarterback, Love’s positives fit the mold teams want.” – Matt Miller, Bleacher Report

Quotable: “The most important thing is to be more consistent. You watch my film, there are some plays where I make an incredible throw, and the next thing you know, I miss a swing route on a checkdown. Being more consistent in all my throws, my footwork, in the pocket, under center, doing dropbacks and things like that. It’s something I’ve practiced since the season ended.” – Jordan Love