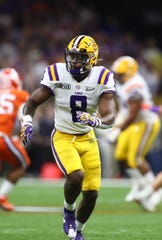 GREEN BAY - Four years ago, the Green Bay Packers had a chance to fix the second level of their defense.

They traded up in the second round of the 2016 draft. Moved up all the way to pick No. 48. Deion Jones, an ultra-athletic linebacker from LSU, was on the board. Ted Thompson drafted offensive lineman Jason Spriggs.

Jones was drafted four picks later. He made the Pro Bowl in his second year with the Atlanta Falcons.

A year earlier, the Packers were looking for a linebacker in the fourth round. They had pick No. 129 in the 2015 draft. Kwon Alexander, an ultra-athletic linebacker from LSU, was drafted 124th overall. He made the Pro Bowl in his second season with the Tampa Bay Buccaneers. The Packers drafted Jake Ryan at 129.

Last year, the Packers didn’t quite get that chance, no matter how badly they might have wanted it. They stood pat on pick No. 12. Devin White, an ultra-athletic linebacker from LSU, was drafted fifth overall. He had an interception, four fumble recoveries and a pair of touchdowns as a rookie with the Bucs.

Here comes another chance, potentially. The Packers still have a significant need at inside linebacker, and another ultra-athletic defender from LSU is entering the draft. Patrick Queen, part of the foundation for LSU’s national championship team last fall, is the prototypical linebacker the Packers covet, with the speed and agility to excel in coverage.

The Packers have seen a lot of near misses with inside linebackers in the draft over the past few years, especially with prospects from LSU. It’s possible Queen, a projected first-round pick, could be another one. If he’s available, he has the skill set to attract general manager Brian Gutekunst’s interest.

Pro Football Focus analysis: Queen played just 250 snaps and started four games in 2018 but displayed some promising reps in coverage by allowing just 49 yards on 92 coverage snaps. He didn’t start for LSU in the 2019 season for the first three weeks, but once named a starter he continued to deliver in coverage by producing an 82.0 coverage grade, which ranked 12th among FBS off-ball linebackers. The fact he allowed just half a yard per coverage snap in his first full season with significant snaps against the SEC is incredibly impressive. His run-defense wasn’t as hot as his coverage ability by posting just a 64.7 grade in that facet, but a linebacker’s performance in coverage is the most important part of their job on the field and Queen clearly did that at a high level.

Draftniks say: “While other Tigers received more attention, Queen has some of the most eye-opening tape of the bunch. He plays fast, physical and with impressive field confidence for a one-year starter. His ability to diagnose and flow are both very rapid, and he operates with excellent body control and balance to gobble up runners as an open-field tackler. His inexperience will show itself in taking on blocks and finding optimal pursuit angles, but that will get cleaned up in time. Queen is next up from LSU’s linebacker factory, possessing the same three-down ability to hunt, cover and tackle as those before him. He’s an early starter with a sky-high ceiling.” – Lance Zierlein, NFL Network

Quotable: “All those guys are great linebackers. There's a lot that separates us as a whole. I feel like my game just goes to another level when I step on the field. I'm fast, explosive, can stop the run to play pass coverage. So I feel I'm just very versatile in what I can do.” – Patrick Queen