Packers Morning Buzz: Time to plan for the future at quarterback

Packers Morning Buzz: Time to plan for the future at quarterback 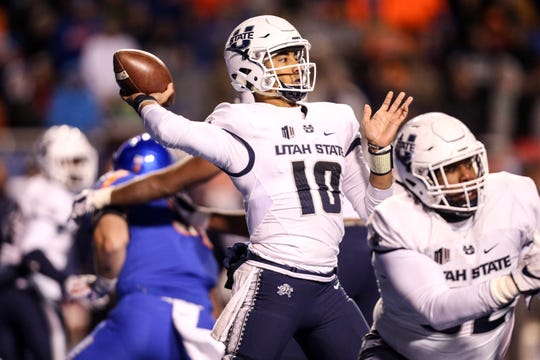 We'll start with Nate Davis of USA TODAY Sports sizing up each NFL team's quarterback draft situation and lists the Packers in the "Planning for the future" category.

Believe it or not, Aaron Rodgers, 36, is now older than Brett Favre was when the Pack surprisingly picked Rodgers in Round 1 of the 2005 draft. A-Rod's numbers have declined in recent years, though that seems more circumstantial than a function of any notable physical decline. That said, are Tim Boyle and Manny Wilkins the best contingency plans for a starter who's closer to 40 than 30?

Recommendation: Like Favre in 2005, Rodgers almost surely has several good years left, perhaps a half-dozen or more. Yet if a player like Jordan Love, who could probably use a few years of sideline development, tumbles to the 30th pick, it might be an opportunity too good for GM Brian Gutekunst to pass up.

ICYMI, here's an #NFLDraft quarterback plan for all 32 teams: https://t.co/FDKMmWOmWg

Sounds like Love, who is among the players who have had a virtual interview with the Packers, could be available when Green Bay picks at No. 30:

From NFL Now on @nflnetwork earlier today on Jordan Love’s stock. I’m with @MoveTheSticks on this one. Could be into the latter part of the first round before we hear his name. pic.twitter.com/SzOOdAz1qQ

More QB draft notes:
— I have not talked to one team that doesn’t have #LSU’s Joe Burrow No. 1 overall.
— #UGA QB Jake Fromm is buzzing because of his interviews & he’s a favorite of QB coaches.
— Utah St QB Jordan Love is the true wildcard, with a draft window from No. 5 to 25.

The Packers also are showing interest in another quarterback prospect:

How good is Hurts? This might be overstating his skills just a bit:

A proven winner who can hurt defenses on the ground and through the air, @JalenHurts is 𝘛𝘩𝘰𝘳.#RareBreed#OUDNA

Scouts share with Pete Dougherty their thoughts on six wide receivers who could be targeted by Green Bay in the draft:

The Packers could get a draft bargain in TCU defensive tackle Ross Blacklock:

If not for a torn Achilles in 2018, Ross Blacklock might be off the board long before the #Packers are on the clock with the 30th pick. https://t.co/b8wAv7ur9w

Former Cowboys executive Gil Brandt lists his "Hot 150" draft prospects for NFL.com. It's not a mock draft, but here's who Brandt rates as his 30th-best prospect:

The junior college transfer only played two years at ASU, and he only started one full season, in 2019. He's a very strong runner after the catch, collecting 378 yards after contact last season, which he finished with 65 catches for 1,192 yards. He's very good on kickoff and punt returns, averaging 31.9 yards per kick in 2019 and 16.1 yards per punt. Aiyuk plays a lot like Deebo Samuel, who made an impact as a rookie last season with the 49ers. Aiyuk is better than N'Keal Harry, who was picked in the first round by the Pats in 2019. Until we see how the core-muscle surgery he underwent this month will impact him, I'm not factoring that into my rankings.

Check out the rest of Brandt's top prospects here:

Here’s an interesting twist regarding Zach Baun testing positive for a diluted sample at combine: Under the NFL’s new CBA, it will not count as a strike against him whereas it would have under the NFL’s old CBA. Therefore, teams don’t believe it will impact his draft status much. https://t.co/Xw8Q7dTqqb

NFL personnel should welcome 'virtual offseason,' draft as a new and exciting challenge

Why I Play: Wisconsin RB Jonathan Taylor opens up about his motivations, inspirations and his relationship with former NFL RB Arian Foster (via @BCersosimo)https://t.co/VN5vvkScYApic.twitter.com/a9b0vlKF3z

How McCarthy's Gym Visit (To See His Daughter) Led Aldon Smith To #Cowboyshttps://t.co/a6YFzVwH07pic.twitter.com/SXCrNVV2Ld