Packers coaches have made it clear it will be Jordan Love’s responsibility to learn, not Aaron Rodgers’ job to teach. 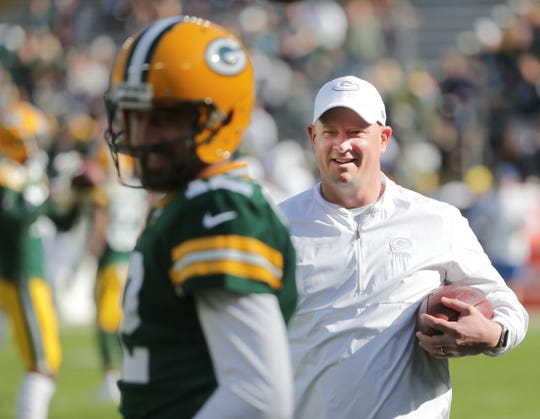 GREEN BAY - For the foreseeable future, the Green Bay Packers' offense could be viewed on separate tracks, one designed to maximize the remainder of Aaron Rodgers’ role as starting quarterback, the other to develop Jordan Love.

It will be a balance for each coach involved, starting with Matt LaFleur. Coordinator Nathaniel Hackett is part of the triumvirate working directly with quarterbacks, along with LaFleur and position coach Luke Getsy.

While developing their quarterback of the future is important, Hackett indicated Rodgers’ role in the offense will remain top priority.

“The coaches’ world,” Hackett said, “I think is always game by game. Every single thing we look at, we’re always looking to try to accomplish that win each week. That’s the only thing that matters to us. The future is obviously something that might be in the back of our mind, but we always live in the moment. That’s usually how we’re all judged.”

The Packers have made it clear they expect Love to do all he can to learn from Rodgers, taking ownership of his development. They hope Rodgers will be a positive mentor, something the two-time MVP suggested he was open to when speaking with the media for the first time after the draft.

When asked about his relationship with Love, whom he called “a really good kid with a good head on his shoulders,” Rodgers said he’ll treat the rookie no different than any other backup.

“I’ve had great relationships over the years with those guys,” Rodgers said, “and I’d expect that same type of relationship with Jordan.”

“I think from Jordan’s standpoint,” Hackett said, “being a young quarterback, for him, it’s being a sponge. I think he’s got a great opportunity right now to learn from one of the greatest to ever play the game, and I think the more he can learn from him, the more that he can dive into the system.”

Love’s integration into the Packers’ system started this month. For now, all NFL teams are conducting virtual workouts, with Zoom calls taking precedence over on-field workouts. So coaches will have to wait to see Love in action, but Hackett will have some familiarity with the incoming rookie.

Before the draft, Hackett studied Love’s film from Utah State. He wouldn’t divulge whom he spoke with about Love, if anyone. But the film gave Hackett a solid basis to work off.

“He was a pretty impressive athlete,” Hackett said. “His ability to move in the pocket and get on the move and make some dynamic throws were things that were really exciting. Just the limited opportunities I’ve been able to spend with him, he seems like a really great guy, but it’s going to be exciting to finally actually meet him a little bit better in person. Because right now I haven’t gotten to spend too much time with him. But there’s a lot of good stuff, a lot of good talent I’ll take for sure.”

It remains unclear whether the Packers intend to have a sub package designed for Love this season. In the immediate aftermath of the draft, LaFleur said he hadn’t given much thought to a set of plays such as the New Orleans Saints, with starter Drew Brees, use for backup Taysom Hill. Without even meeting Love in person, Hackett said it’s difficult to gauge what kind of impact the young backup might have as a rookie.

But one thing appears clear: A coach’s primary job is to win games. That will be the objective this fall, meaning Rodgers’ role in the offense comes first, but Love will need to be ready if called upon.

“Anything can happen at any moment in a game,” Hackett said. “That’s what makes the game so much fun. You have to prepare everybody like they’re a starter, and they have to go in there and play. I think it’s about winning. It’s about Aaron Rodgers going out there and winning a football game, and Jordan will have to continue to learn and continue to be a good sponge and get as much information from the system and the game plan set for Aaron.”

The Packers have signed seventh-round draft pick Jonathan Garvin, a linebacker out of Miami and the last of their nine 2020 selections.