Packers Morning Buzz: Forget WR – Green Bay's biggest weakness is on other side of the ball

Packers Morning Buzz: Forget WR – Green Bay's biggest weakness is on other side of the ball 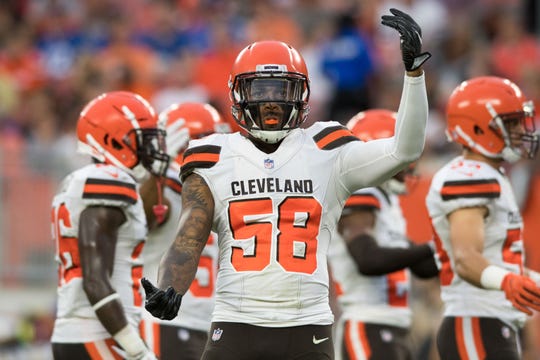 We'll start with SI.com's Conor Orr pinpointing each NFC team's biggest weakness. And for the Packers, it's – thankfully – not another tired take on the wide receiver position.

LINEBACKER: I think anyone who saw the 2019 NFC championship game would side with me here. The linebacker position as a pass-rushing unit has promise, and, in fact, was a top-seven team when sending three-, four- and six-man pressure last year. However, the Packers struggled mightily against the run and were exposed often in man coverage. This would have been an interesting offseason to get younger and faster at the position. Mike Pettine’s defense works best when linebackers can effectively fade into coverage and amp up the theatrics of his simulated pressure looks. The offseason addition of Christian Kirksey doesn’t add much confidence to the unit in terms of a proven pass defender.

Three months from the start of the season, here's @ConorOrr's look at the biggest problem with every NFC team's roster https://t.co/KRRysJ3G8i

Ah, but leave it to former Cowboys executive Gil Brandt to rank the Packers' receiving corps (including tight ends) second on his list of the nine biggest roster holes across the NFL:

The Packers haven't used a first-round pick on a receiver or tight end since Aaron Rodgers entered the NFL in 2005, and the streak continued this year with the selection of Rodgers' heir apparent, quarterback Jordan Love, at No. 26 overall. Green Bay didn't draft a single player to augment a wide receiver group that struggled to produce in 2019, with only Davante Adams managing to catch more than 35 passes among receivers. Whether Rodgers will have quality targets to work with at the tight end spot is an even bigger concern, with Jimmy Graham heading to the Bears in free agency. Jace Sternberger, a 2019 third-round pick, is the front-runner to step up, but he didn't catch a regular-season pass after spending much of the year on injured reserve. Third-round pick Josiah Deguara from Cincinnati will try to avoid a similarly unproductive fate in Year 1, but it's tough to expect much from a rookie at a position that is notoriously difficult to master.

You can read the rest of Brandt's list here:

Biggest NFL roster holes: Who will man Cowboys' secondary? Where will Seahawks' pass rush come from? (via @Gil_Brandt)https://t.co/n9po4gdMVIpic.twitter.com/PMmuwkWg1i

Second-year tight end Jace Sternberger says he learned a lot from the departed Jimmy Graham and feels like he's ready to play an important role:

It's the first time since high school Sternberger has had the same head coach, offensive coordinator and position coach for the second straight year. https://t.co/bZMNCxx0hA

The Packers rate near the top in this fascinating deep dive examining every NFL team's draft efficiency over the last 10 years:

Here's a look at NFL drafting efficiency 2010-2019, comparing player AV to expected AV from each draft slot. SEA, GB, DAL have had the best return on investment. NYJ, CLE have had the worst return. https://t.co/9SLQ3gb1ZW

The Packers may be the NFL's slowest team at the skill positions, according to NFL.com's Daniel Jeremiah:

We pulled 40 times for every team in the league and projected their lineup in 11 personnel (1RB, 1TE & 3WR) for 2020 season. Here are the 5 fastest groups in the league: pic.twitter.com/Ap7soqpnJs

Here are the 5 slowest teams (based on 40 times) in 11 personnel for 2020 season: pic.twitter.com/ClbU5yINGo

To go with that, here's a look at what all 32 teams have returning next year ranked from most snaps back to fewest and more... #49ers rank 4th... https://t.co/gNUNlLmkM6

You can't highlight someone's flaws then turn around and ignore their attempts at reconciliation. There's still substantial work to do but this shows good faith. https://t.co/unz8UdCLYi

Rob Reischel's countdown of the 30 "Most Important Packers" features a player with untapped potential:

My countdown of the 30 'Most Important #Packers' at @ForbesSports continues with second-year DE Kingsley Keke at #27. Can Keke help Green Bay's porous run defense?https://t.co/uONAzetfW9

Mitch Trubisky spoke publicly for the first time since the Bears' acquisition of Nick Foles:

Mitchell Trubisky opened up on his thoughts on the Bears' trade for Nick Foles.https://t.co/BZxZXRayLN

Preparing for his fight to remain the #Bears starting QB, he came across authentic and confident even if, at least in my eyes, odds are against him.https://t.co/ZcEpWdgaHt

The Lions seem to be getting a lot of national love. NFL.com lists Detroit as the most likely "worst to first" team in  any division:

The NFC North is the most flawed division in football. Thus, all four teams can win it. Yes, even the Lions, who haven't won a division title since back in 1993, when they were playing in the NFC Central.

I still give Green Bay the edge over the rest of the field, but the Packers' counterproductive and inexplicable offseason gives them a 10-win ceiling. While Green Bay did play in the NFC title game just five months ago, I don't think the Pack are on the level of NFC adversaries in San Francisco, Tampa Bay, New Orleans, Dallas or Philadelphia. Heck, right now, the Cardinals, Seahawks, Falcons and Rams look better, too. But someone has to win the North. Minnesota is trying to win while retooling -- and now Dalvin Cook's apparently pondering a holdout. I see the Vikings winning eight or nine games. The Bears have a great defense ... and the least inspiring quarterback room in the league. Smells like 8-8.

Which leads me back to Detroit. I'm saying there's a chance. A real one.

You can find the rest of the story here:

Almost every NFL season, at least one team rises from the cellar to take the divisional crown. Who's most likely to go from worst to first in 2020? @AdamSchein ranks the eight candidates, with a No. 1 pick that might surprise youhttps://t.co/5zr1Xf7HWdpic.twitter.com/8icLjencmB

And finally .... for Packers fans, the wait is over: