Welcome to your Morning Buzz, catching up on news and views regarding the Green Bay Packers from around the web. 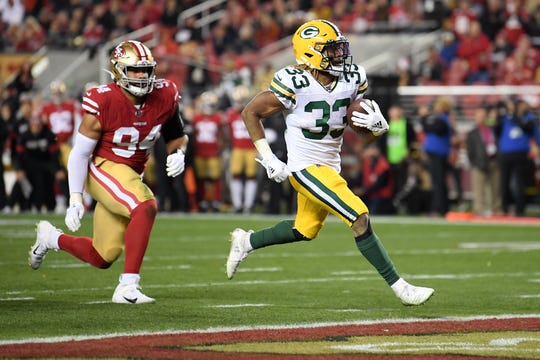 SANTA CLARA, CALIFORNIA - JANUARY 19: Aaron Jones #33 of the Green Bay Packers runs for a touchdown against the San Francisco 49ers during the second half of the NFC Championship game at Levi's Stadium on January 19, 2020 in Santa Clara, California. (Photo by Harry How/Getty Images) (Photo: Harry How, Getty Images)

Welcome to your Morning Buzz, back from summer break and catching up on news and views regarding the Green Bay Packers from around the web and here at PackersNews.com.

We'll start with Nate Davis of USA TODAY Sports looking at winners and losers resulting from the NFL's decision to cancel all preseason games as part of changes necessitated by the coronavirus, and why the Packers figure to be one of the teams that benefit:

Last season's final four: The Super Bowl LIV champion Kansas City Chiefs, NFC champion San Francisco 49ers, Green Bay Packers and Tennessee Titans – the latter two lost in the conference championship round – all return largely intact from front office, coaching and personnel perspectives. Sure, the Titans lost stellar RT Jack Conklin in free agency, and the Packers may not have done enough to upgrade QB Aaron Rodgers' array of weapons. But these teams should reap relative gains from the continuity factor that so often distinguishes good NFL franchises from bad ones.

A must-read: Richard Ryman examines the potentially devastating impact of a season without Packers football in Green Bay:

For subscribers: It may be home to the Packers, but Green Bay is in many ways like a college town in that it relies on the team to lift its economy every fall, not to mention define its identity. https://t.co/hfNwoxKzf6

The Packers begin the process of trimming their 90-man roster down to 80, as mandated by COVID-19 protocols agreed upon last week:

Willis was waived today by the #Packers, nearly three months to the day he was claimed. Tough deal for a lot of guys these next fee weeks. Packers have to trim nine more off the roster by mid-August. https://t.co/OOozQQiZ5V

Our Packers position previews are in full swing:

For subscribers: Clark, Lowry, Lancaster, Adams and Keke could form the defensive line to open the season https://t.co/gcgnGu0SOX

For subscribers: This could be the last year in some time the #Packers can rely on the experience of their offensive line. https://t.co/KhqQQjBEsz

For subscribers: In Matt LaFleur's system, tight ends are heavily relied upon in all facets of the offense. https://t.co/GWxnOIG3LZ

For subscribers: A wide receiver position that went almost untouched this past spring could be the most volatile on the #Packers’ roster this summer. https://t.co/cMIQAXf1Tf

For subscribers: The drafting of Dillon in the second round was an eye opener. https://t.co/si1ySisY1m

For subscribers: You don’t have to dig very deep – and Rodgers doesn’t have to look very far – to realize how different things now are. https://t.co/4Oh5L59eE7

Packers safety Adrian Amos is projected to be even better in his second season in Green Bay. Analytics expert Cynthia Frelund of NFL Network writes:

The moves Green Bay made last offseason, especially on defense (including signing Amos), created a big uptick in pressure and efficiency, which helped propel the Packers to the playoffs. While Amos may only have been Pro Football Focus' 12th-highest-graded safety for the season (among those with a minimum of 300 snaps), the net impact of all of the pieces of the defense working together likely obscured how much any individual contributed to the whole. With linebacker Blake Martinez now a member of the Giants, the middle of the defense could function differently, meaning Amos could have more opportunities to realize his potential.

You can see the entire article here:

Will we see a better Tom Brady in Tampa? Is Kenyan Drake about to top his 2019 production in Arizona? @cfrelund uses analytics to project the most improved player from each NFC team in 2020https://t.co/lkvlXLWgdzpic.twitter.com/5Vs8TvrK20

Packers safety Darnell Savage is determined to build off his solid rookie season:

Packers running back Aaron Jones is tough to bring down:

Aaron Jones posted a career high 3.06 yards after contact per attempt during the 2019 season. #GoPackGopic.twitter.com/hNgmoOPsv3

Most-valuable running back groups in 2019 per PFF WAR:

Here's a look at new Packers running back AJ Dillon at his best:

For #Packers fans: Aaron Rodgers’ all-time best 4.33 TD/INT ratio is full TD better than 2nd-place Russell Wilson’s 3.33. If each of Rodgers’ next 25 passes is INT, he’d still be first.

And Rodgers also excels in that category in the postseason:

We all know that @AaronRodgers12 has the best regular-season TD-INT ratio of all time at 4.3:1

But did you know he also has the best playoff TD-INT ratio ever?

🗣 FOOTWORK THIS PURE IS NOT EASY

Hours upon hours honing his craft to ultimately create this perfection pic.twitter.com/7su5AUeocT

According to Pro Football Focus, Packers cornerback Kevin King sticks to receivers like glue in the red zone:

And finally ... Packers running back Jamaal Williams has a request:

Pls don’t take my niceness from weakness, if I signed one of your items for free pls don’t take advantage and try and have me sign everything you own 🤔 believe or not most athletes want to be treated like normal ppl. I just want to play Football, be a great Dad, and watch anime pic.twitter.com/6otA55VdIT