Lackluster Lacy a problem for Packers

Their No. 1 halfback's lack of explosiveness shows he's either injured or too heavy

Lackluster Lacy a problem for Packers 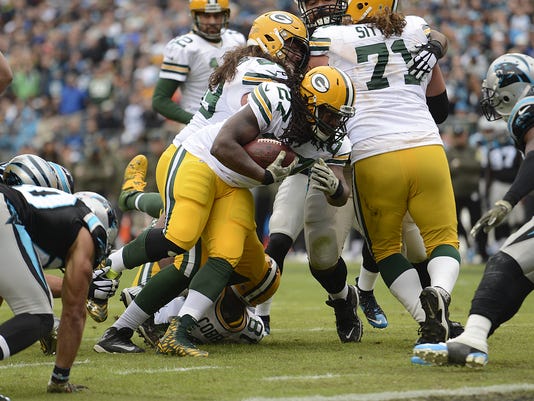 Green Bay Packers running back Eddie Lacy (27) tries to find the end zone while making a run against the Carolina Panthers during Sunday's game at Bank of America Stadium in Charlotte, NC.(Photo: Evan Siegle/P-G Media)

In 2013 the Green Bay Packers survived Aaron Rodgers’ broken collarbone to make the playoffs in large part because they had Eddie Lacy at running back.

Last year, the Packers advanced to the NFC Championship Game and were a botched onside-kick recovery away from advancing to the Super Bowl again in part because of Lacy.

This year, the Packers are struggling to adapt to life without injured receiver Jordy Nelson, and one of the big reasons is Eddie Lacy. He simply hasn’t been the player he was the last two years.

Either Lacy’s injuries (an ankle from earlier in the year, a pulled groin sustained this past game at Carolina) are a bigger issue than the team is letting on, or he’s carrying too much weight. Either way, he’s not showing the power and explosiveness that made him a godsend for the Packers’ offense in 2013 and ’14.

The Packers need to either rest him until he’s healthy or get him to drop weight, because right now he’s leaving way too many yards on the field. He never has been super quick or a guy who’s going to out-run people, but at his best, when he can cut hard and run low, he’s like trying to tackle a bull.

Since returning from an ankle injury sustained in Week 2 against Seattle, Lacy hasn’t shown the qualities that have made him special. He’s getting only the yards that are blocked. He’s floating to the hole instead of planting his foot hard and exploding through it. He’s not getting many yards on his own.

On Sunday in the Packers’ loss at Carolina, Lacy gained only 10 yards on five carries. That gives him 78 yards rushing on 33 carries (2.4-yard average) in the last four games. He wasn’t on the injury report for any of those games.

Looking at the game video, Lacy’s lack of explosiveness Sunday was obvious. His first carry of the game, with 9:25 left in the first quarter, was a zone run to the right on second-and-8. He took the handoff and rumbled to the hole. Fullback John Kuhn made an OK block on linebacker Shaq Thompson, and center Corey Linsley ran out just fast enough to get in linebacker Luke Kuechly’s way.

But Lacy didn’t have the explosion to cut back, right off Linsley’s backside. Last year he would have gained four or five yards on that play. He would have planted, had his outside shoulder come right off Linsley’s backside, and bulled straight into linebacker Thomas Davis three or four yards downfield. Instead, he ran right into Thompson and Kuechly, who tackled him for a one-yard loss.

Same on Lacy’s next carry, a first-and-goal from Carolina’s 4 with 1:55 left in the first quarter. It was a run right up the middle, and Lacy didn’t get down and run behind his pads. He hit the hole straight up. He got to the 1, but in the last two years he’d have hunkered down, exploded past lead blocker Richard Rodgers’ backside and scored on the play.

And same thing on Lacy’s fumble late in the second quarter. It was a run to his left with Kuhn as lead blocker. The Eddie Lacy of 2013 and ’14 would have kept his pads low and cut back hard, right off Kuhn’s back. He would have made the ball hard to get to and might have picked up several yards. Instead, the upright Lacy was an inviting target for blitzing cornerback Charles Tillman, who came in from the side and punched the ball free. Carolina recovered.

The fact of the matter is, James Starks has been the better back over the last month, and that’s why the Packers are playing him more. He’s played 131 snaps to Lacy’s 100 in the last four games. The Packers’ run game is struggling, but Starks gained 112 yards rushing against San Diego on Oct. 18, and against Carolina caught six passes for 83 yards.

Lacy simply is not the same guy as the last two seasons, and it’s hurting the Packers big time. Starks at his best isn’t as good as Lacy at his best. If the Packers are going to have a run game that scares defenses, they need Lacy.

Coach Mike McCarthy said Lacy’s groin was healthy enough to handle a full workout Monday. We’ll see how he is later in the week.

But if Lacy’s groin, ankle or both have been the problem for most of the first half of the season, then the Packers need to rest him and let him get right. And if the problem is Lacy’s weight, which McCarthy has said is higher than the 230 pounds he was listed at last year, then Lacy needs to drop some pounds, and fast.

Jake Ryan played well enough after replacing Nate Palmer that he should hold the starting job at inside linebacker opposite Clay Matthews.

Ryan, a fourth-round draft pick, replaced Palmer late in the second quarter and played the rest of the game when the Packers were in their base and nickel defenses. He played 38 snaps (57 percent of the Packers’ defensive total) and had a tackle for loss among his team-leading 10 tackles.

We’re not suggesting Ryan was at all dominant, but down in and down out he played faster than Palmer, as he showed in a stretch of three straight plays early in the third quarter.

On the first, with 11:23 left in the quarter, Carolina ran a straight power play at him. Ryan took on tight end Ed Dickson, who was lined up in the backfield, shed the block and got in on the tackle of halfback Jonathan Stewart.

The next play he lined up alongside Matthews at the line of scrimmage, right over center, posing a potential Double A-gap blitz. Carolina ran Stewart to the right, and Ryan hustled over and made the tackle a couple of yards outside the numbers. Stewart gained 10 yards, so it wasn’t a great play, but Ryan had to go a long way to get there.

On the next play, a run over left guard, Carolina tight end Greg Olsen got out on Ryan and blocked him back a yard. Ryan then pushed Olsen to the ground and was able to finish off the play just as Stewart was twisting out of a tackle, holding him to a two-yard gain.

It’s not the kind of thing that’s going to turn around the Packers’ defense, but every little improvement helps.