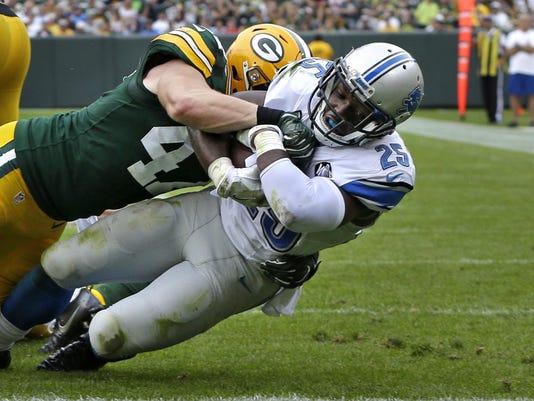 Last year the Green Bay Packers' run defense also got off to a strong start, and at this time in 2015 ranked No. 6 in the NFL in rushing yards allowed. It finished the season No. 22.

So it’s fair to wonder if the same fate awaits coordinator Dom Capers’ surprisingly stout run defense that after three games ranks No. 1 in fewest yards allowed per game and per carry.

And the prediction here is, no. If you look at why the Packers are stopping the run, and if you throw in the imminent return of suspended defensive lineman Mike Pennel, there’s good reason to think this could remain a top-five run defense to season’s end.

The Packers have started well against the run for several reasons, but their tackling stats suggest a big one: After three games, starting inside linebackers Jake Ryan (22 tackles) and Blake Martinez (18 tackles) have combined for 40 tackles. After three games last year, the starters at the time, Clay Matthews (12) and Nate Palmer (14), had 26.

And Ryan and Martinez aren’t racking up tackling numbers while giving up good gains. Pro Football Focus has a stat called “stops” that it defines as a tackle that results in an offensive failure based on down and distance. Half of Martinez’s and Ryan’s tackles have been stops.

Those numbers speak volumes about the Packers’ weak inside linebacker play in recent years. Ryan and Martinez already have proved to be much better players than Palmer ever was. And their play shows that as necessary as it was for the Packers to move Matthews inside in 2014 because they had no one else who could do it, they were right to put him back outside this season.

Chances are, neither Martinez nor Ryan ever is going to be a Pro Bowl player. They don’t have the distinguishing traits of explosiveness or speed that guys like Bobby Wagner, Luke Kuechly, Anthony Barr and NaVorro Bowman (before his season ended Sunday because of a torn Achilles) bring to the position.

But Martinez and Ryan are sound, instinctive players, and better than most of the inside linebackers the Packers have lined up over the past decade.

For instance, in Capers’ 3-4 scheme, the rookie Martinez probably is better than former first-round pick A.J. Hawk was in his prime.

Desmond Bishop, a key injury replacement during the Packers’ 2010 Super Bowl run, was more of a thumper but couldn’t cover like Martinez. And Nick Barnett, though a more explosive athlete than either, was too prone to missed tackles and over-running his gap. How many times did Adrian Peterson cut back on him for nice gains over the years?

It’s also telling that Palmer, though still in the NFL with Tennessee, doesn’t have a tackle from scrimmage this season. He’s a special-teams player. Even with the Packers' No. 6 ranking in run defense after four weeks in 2015, he was too great a liability to cover up.

But Martinez and Ryan flashed these same instincts and ability to press the line of scrimmage since early in training camp. They’re still going to make mistakes, and they don’t have the physical talent of the top players at their position, but they’ve done enough since August to think this isn’t an early-season fluke.

As for the other reasons behind the Packers’ fast start defending the run, anyone who has watched their first three games knows Mike Daniels has been indispensable. If he keeps this up as both a run stopper and pass rusher, he might be a first-team All-Pro.

And the big roles Nick Perry and Datone Jones have played has been well documented over the past week or so. Both have been consistently stout holding the edge, but more than that, they’ve been shedding blocks and making plays. Perry leads the team in Pro Football Focus’ stops with 10.

Now, some might argue it’s too early to make this kind of a prediction about a defense that has finished No. 22 or worse against the run the last three years and hasn’t cracked the top 10 since it was No. 1 in 2009, Capers’ first season as coordinator. They also might point to a schedule that has included Jacksonville and Detroit, who are a combined 2-6 to start the season. Those arguments have merit.

But that doesn’t account for the dominating performance against Minnesota’s Peterson. The Packers shut him down (19 yards on 12 carries), and though he did get injured in that game, that wasn’t until the final three minutes of the third quarter.  That’s great run defense no matter how you slice it.

A big test is coming soon, in two weeks against Dallas. The Cowboys have the best offensive line in the NFL and drafted running back Ezekiel Elliott at No. 4 overall this year. They see themselves as an elite running team, and Elliott leads the league with 412 yards rushing. That’s a pace of 1,648 yards for the season.

That, coincidentally, will be the week that Pennel returns from a drug suspension. He probably won’t be much of a factor that game after a four-week layoff from football, but once he’s back in game shape he’ll probably rank with Daniels as Capers’ best run defenders on the defensive line. That, if nothing else, will alleviate some depth concerns.

It's also another reason to think Capers will finish 2016 with his first top-five run defense since 2009.

— Former football coach and player Eric Baranczyk offers his analysis of Green Bay Packers games each week during the season. Follow him on Twitter @EricBaranczyk1