Wild-card loss to Bills made for brutal offseason in Houston.

Ask Bruce Matthews how long it took him to get over the Houston Oilers' epic playoff collapse against the Buffalo Bills in the 1992 season, and he suggests he still hasn't.

"What year is it?" said the Oilers' Pro Football Hall of Fame offensive lineman. "They show it (on TV) this time of year — it's something we watch and I still think we're going to win."

Before the Green Bay Packers' late meltdown last week in their 28-22 loss to the Seattle Seahawks in the NFC championship game, there was the Houston Oilers' staggering collapse in the wild-card round of the playoffs against the Bills in January 1993.

Houston led 35-3 early in the second half against the Bills, who were playing their backup quarterback, Frank Reich, for an injured Jim Kelly. Yet the Oilers wound up losing in overtime, 41-38. It's the greatest comeback in NFL history, regular or postseason, and one of the league's most famous playoff games.

It made for a brutal early offseason in the spring of 1993. To begin with, owner Bud Adams fired defensive coordinator Jim Eddy and his assistants.

"(Adams) was just livid," said Frank Novak, the Packers' special teams coach from 2000-04 and the Oilers' running backs coach at the time. "That had to be one of the best teams I've ever been on. We had the talent to go to the Super Bowl that year, that's how good we were. How we could blow a 30-plus-point lead in the second half is beyond me." 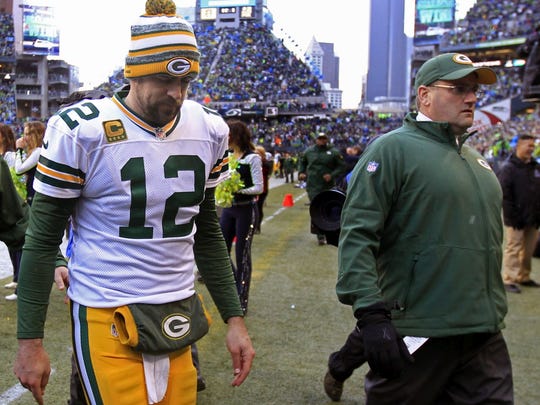 The truth is, we don't know how their stunning loss will affect the Packers this offseason, and whether there will be any carryover to next fall. No doubt there are players mad at teammates and coaches, and vice versa, for the mistakes in the final four minutes and overtime that cost the Packers the game.

Will bad feelings linger and poison the locker room? Will the meltdown in the end galvanize the team for 2015? Will it change the way coach Mike McCarthy or general manager Ted Thompson conduct business? Will it have minimal impact? Who knows?

But if you're looking for evidence that the Packers' horrifying loss to the Seahawks will harm their 2015 season, you'll have to look elsewhere than the '92 Oilers. Houston was 10-6 in 1992 leading up to that calamitous defeat but came back in '93 to go 12-4 before losing to Kansas City in the divisional round of the playoffs.

"You basically have to throw it out and say it's a total aberration, it's a once-in-a-lifetime deal," Matthews said.

Said former Oilers cornerback Cris Dishman, now an assistant coach at Baylor: "Everybody was great (by the start of offseason practices). It was over, had new coaches in. As players we're so resilient, we're out here to do a job. It lingers on and lingers on and then all of a sudden it's over."

That doesn't mean things will turn out well for the Packers, who at minimum are in for a difficult next month or two. The team's management also is justified if it harbors concerns about a carryover, even if no one in the organization is likely to acknowledge it publicly.

The Packers' scouts already were at the Senior Bowl last week, and in a few weeks their entire football staff will go the NFL scouting combine in Indianapolis. Both are essentially conventions for the league's coaches and scouts.

"You couldn't get past it because it's what everybody else wanted to talk about," Novak said. "All the guys are there, the people you entered the league with. Guys you respected, players you formerly coached are there coaching. You see everybody, and that was the topic of conversation: 'How the hell did that happen, Frank?'"

Dishman recalled not leaving his house in Houston for three or four days after losing to Buffalo just so he wouldn't have to talk to fans. The first day he ventured out, he dropped off his child at school and then stopped by the grocery store.

"You have to hear that crap," he said. "'What happened? You guys had the game.'" 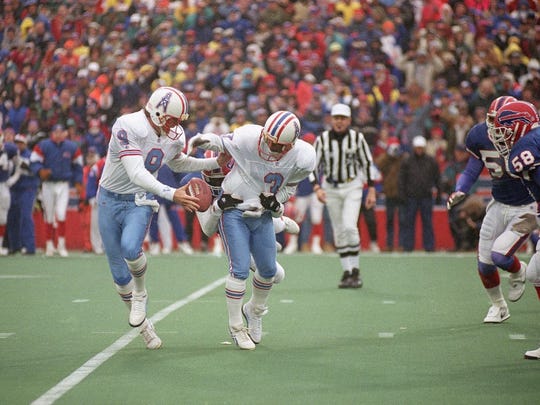 Houston Oilers kicker Al Del Greco (3) and holder Greg Montgomery (9) juggle the ball after an aborted field goal attempt during the fourth quarter of their game against the Buffalo Bills in January 1993 at Rich Stadium in Orchard Park, N.Y. The field goal would have been the margin of victory, avoiding the overtime period. The Bills won the game in overtime 41-38. (Photo: Bill Sikes, AP)

As far as the locker room, the players won't convene for another three months, in late April, for the start of the offseason workout program. By then, many recriminations will have faded, though it's worth remembering that as we get older, we take some failures harder than when we were younger.

And some people can stay mad a long time.

"The older guys will hold onto it longer because their opportunities are squeezed now, they might not get another chance," Novak said. "It's richer with them, it's so raw. But the (coaching) staff has to defuse that, and the players have to buy into it."

Matthews, who coached in the NFL from 2009-13, suggested that annual offseason roster turnover engendered by the salary cap and free agency will foster moving on. He also wouldn't rule out the possibility that the defeat could be a rallying point.

"Each season is so mutually exclusive to all the others," he said. "Part of your roster is going to flip. I don't know about the coaching staff, if there will be turnover there. But there's turnover every year. So although there is carryover, I don't think it will affect them other than a motivational chip to realize how precious those opportunities are."

One given is that the Packers' loss to the Seahawks will live on for decades. It will go down as one of the greatest moments in Seahawks' history, and if they win the Super Bowl next week it might even be their Ice Bowl. Just as the Ice Bowl embodies the Lombardi era for the Packers, the Seahawks' comeback against the Packers could symbolize the resilience that won them back-to-back Super Bowls.

“It's something we watch and I still think we're going to win.”

Every year at playoff time, the Packers can expect to see full replays of the game, or highlight shows with at least its final minutes and overtime, on NFL Network and ESPN Classic. And years from now, when another team blows a seemingly safe lead late in a playoff game, the Packers-Seahawks matchup will come up.

In several brief interactions with members of the Packers' organization this week, it was obvious the team and its staff still are numb from blowing a 12-point lead in the final four minutes last week. The size of the lead wasn't like the Oilers' incomprehensible defeat, but the Packers fell apart in a remarkably short amount of time and cost the highest of stakes: a trip to the Super Bowl.

"The lesson to be learned is you have to play the game all the time," Novak said. "For them to let that thing get away, think of that. You are the Green Bay Packers and you let that game get away like that.

"After the draft when they start coming back for (OTAs) they'll defuse it as best they can. They'll rally around each other. But it's going to take awhile. That franchise has not gone through anything like this."