QB can hurt defenses running in the read-option and as a scrambler. 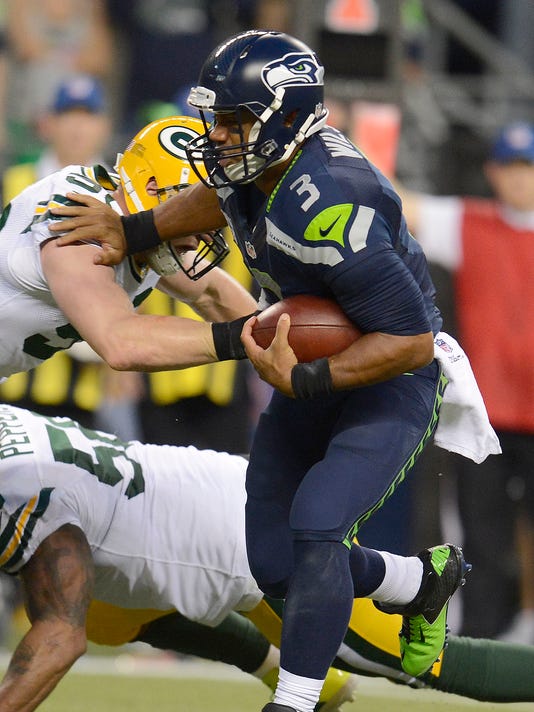 RESTON, Wash. – Conventional wisdom says that to subdue the Seattle Seahawks' offense, you have to start with halfback Marshawn Lynch.

He's one of the NFL's two best running backs, finished fourth in the league in rushing, and in many ways, the Seahawks' offense revolves around him.

But a scout from one of Seattle's NFC West Division rivals has some advice for the Green Bay Packers and defensive coordinator Dom Capers, who face the Seahawks in the NFC championship game Sunday.

The Seahawks are not among the NFL's most dynamic offenses, but they finished in the top 10 in yards (ninth) and points (10th) because of Wilson and Lynch.

Lynch's tackle-shrugging running forces defenses to load up against him. Defenses are almost forced to play eight defenders in the box on early downs.

But it's Wilson's play in his third season that is getting the attention of teams around the league. The aforementioned scout was lukewarm on Wilson his first two seasons but now views him as one of the better quarterbacks in the league.

He doesn't rank Wilson among the game's best passers, but Wilson's ability to hurt defenses running in the read-option and as a scrambler are as important to the Seahawks' offense as Lynch.

"I can't say he's more dangerous one way or the other," the scout said. "I'd just say he's a challenge in both. That's what makes their offense go, that combination: Marshawn and Russell on the zone read, and (Wilson's) ability to move around and hurt you when plays break down in the passing game. Plays that are dead, you've covered everything, but he keeps them alive. That's where he's so valuable."

This is a problem the Packers have faced several times in big games the past few years, and they haven't fared well. San Francisco 49ers quarterback Colin Kaepernick is 4-0 against them going back to 2012, including beating them twice in the playoffs, and Wilson is 2-0. The Packers are 2-0 against Cam Newton, another of the game's premier running quarterbacks.

When the Packers and Seahawks met in the regular-season opener, Wilson had a typical game with modest numbers in what in the end was a blowout 36-Seahawks win, 36-16. He threw for only 191 yards but had a 110.9 passer rating, and rushed for 29 yards on seven carries.

The read-option is a staple of the Seahawks' offense, and the decision Capers has to make in defending it is how to use his outside linebackers, who line up basically as 4-3 defensive ends.

In the read-option, the offense doesn't block the outside linebacker/end on the side where the run is going. Wilson will read that man. If the end holds his ground and plays Wilson, Wilson hands the ball to Lynch. If the end dives down the line and goes for Lynch, Wilson keeps the ball and runs to that vacated side.

The difficulty is, that inside linebacker has to be athletic enough to chase down Wilson, who ran the 40 in 4.55 seconds at the NFL scouting combine in 2012. But doing it that way allows the unblocked end a clean shot at Lynch just as he's hitting the line of scrimmage, rather than forcing a player in the interior to come off a block and make the tackle.

"To me, you have to do that, you have to crash (the end) down and take that back," the scout said. "You have to have somebody else take (Wilson), swing around and take Russell when he doesn't hand it."

Lynch usually gets the handoff — he had 280 carries to Wilson's 118 — and punishes defenses with his physical style. According to ProFootballFocus, Lynch led the NFL in forced missed tackles with 88, which was 21 more than No. 2 on the list, Dallas' DeMarco Murray. Murray was the league's leading rusher.

When asked to choose between Lynch and Murray for the league's best back, a scout for another NFC West team went with Lynch.

"Lynch brings too much to that team," he said. "When they're not running the ball effectively or not being productive, he's either not getting the ball or he's on the bench."

In the passing game, the goal is to keep Wilson in the pocket, where at only 5-feet-105/8, he's the league's shortest starting quarterback, with the accompanying issues of seeing over the defensive line and finding passing lanes. He finished the regular season with a 95.0 rating.

"Russell has to manage the game, and still he's going to make three big plays a game," the second scout said. "If it's in the passing game, if it's with his feet, whatever it is. When you think you've got him, he's going to escape, and if he doesn't run for it, he's going to throw it on the run and make a big play. You always look for three to four of those big plays during a game with Russell."

Matthews one of Carroll's 'big misses'

Defenses use several approaches to defend scramblers such as Wilson, Kaepernick and Newton, and under Capers the Packers have mixed in most or all of them.

The initial scout said two options work best: rushing five, with all the rushers holding their lanes and trying to contain him in the pocket more than going for the sack, or rushing four with abandon, with a fifth player spying from middle linebacker.

In coverage, they generally play zone to help limit scrambling.

"You don't want to play man-to-man versus Russell," the scout said. "If there's a cardinal sin — you don't do that. When you play man-to-man, the defenders are turning their back, so all he has to do is one guy misses and he's off to the races. That's where he's going 20, 30 yards."

One of the problems for the Packers is that their best pass rusher, Clay Matthews, also is their most viable spy. He's their fastest and most athletic linebacker, and their only one who has much chance of keeping up with Wilson if he runs.

As an alternative, maybe Capers will try something more novel on some passing downs by deploying seven defensive backs (and four rushers). Then a defensive back could line up at middle linebacker as the spy.

Last week against Dallas, Capers on a couple of snaps went with seven defensive backs, with Jarrett Bush as the seventh. But none of them lined up at middle linebacker. If Capers tries that tactic Sunday, slot cornerback Micah Hyde or one of three safeties (Morgan Burnett, Ha Ha Clinton-Dix and Sean Richardson) could be options for middle linebacker.

Capers' history has been to mix in some form of spy coverage occasionally. The first scout advocates spying — "It's a good change of pace," he said — but the second one doesn't.

"That's just wasting a player," he said. "I think (the Packers should) play them straight up and let it happen. The difference this time around is Julius Peppers. Everybody says he was ineffective the first time they met. Well, that's true. But you saw what he did the last game (i.e., last week against Dallas). He has a knack of making plays, making the miraculous play, the forced fumble, the interception. I think he's going to be a key cog in this game."

The crux of game planning for the Seahawks is Wilson and Lynch because their weakest position group is receiver. After trading receiver Percy Harvin early in the season, they don't have a receiver who warrants game planning around or commands double coverage.

Jermaine Kearse (38 catches, 14.1-yard average) is their best downfield threat and has some ability to get jump-ball-type throws. Doug Baldwin (66 catches, 12.5-yard average) is a slot-type receiver with quickness. Luke Willson, who plays extensively at tight end because of Zach Miller's season-ending ankle injury, is a second-year pro who's made a few big plays (22 catches, 16.5-yard average).

"You make (Wilson) a pocket passer and have to throw it to the wide side of the field, that's where he has problems," the first scout said. "Bottom line, he can't see over all those people. He gets out of the pocket, he's a nightmare. That's when he's the most efficient guy on the planet."