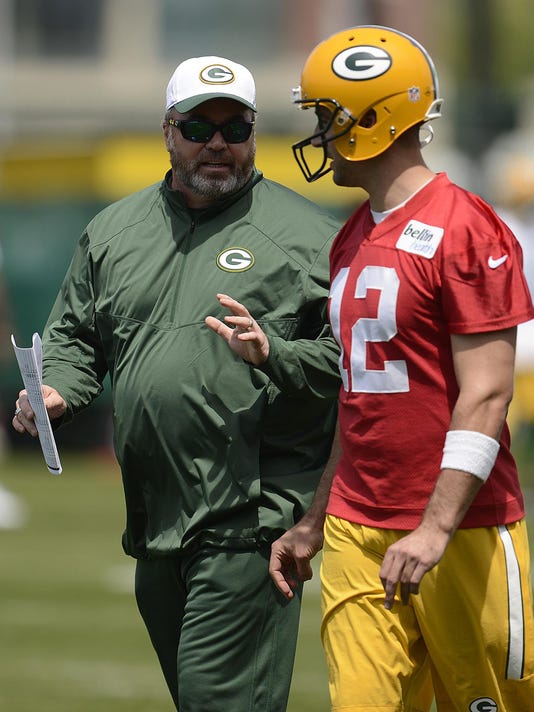 It's now clear that Mike McCarthy had more in mind than game management when he gave up play-calling this offseason.

When the Green Bay Packers coach announced the change, it looked like it was primarily a game-day move, and that the team's special-teams errors and late meltdown in the NFC championship game convinced him to make a change he'd been contemplating for a year or two.

And that had to be a factor in McCarthy's decision.

But as the offseason has unfolded, there's been more to the change than freeing his attention for game management and his insistence that he would attend special-teams meeting.

McCarthy also has been fostering more information sharing among the offense and the defense. That's included him sitting in on defensive position group meetings occasionally to share the offense's point of view during video sessions.

According to quarterback Aaron Rodgers, this sharing has shown up on the practice field this spring. Rodgers said the biggest difference he's noticed this offseason — bigger than the changes on offense with McCarthy handing over play-calling to Tom Clements — is in the defense.

"This is a full-out, secret-sharing deal almost, with what Mike has helped them with," Rodgers said in a Q&A with Press-Gazette Media last week. "It's really increased the football IQ of our team in that sense, because the defense is playing faster and doing more things to try to disguise what they're trying to do."

There's probably nothing unusual in offensive and defensive coaches on the same team exchanging ideas, especially in the offseason. I remember Jon Gruden talking about drawing up plays with defensive coaches when he was offensive coordinator with the Philadelphia Eagles in the late 1990s.

And Dom Capers, the Packers' defensive coordinator, said he often exchanged ideas with head coaches he's worked under, namely Tom Coughlin when he was Coughlin's defensive coordinator with the Jacksonville Jaguars. Capers also said that Bill Belichick was heavily involved with both sides of the ball in their one season together with New England.

But it's hard not to wonder if the level of detail is greater here. When McCarthy sits in on the occasional defensive position group meeting, he's telling players what the offense is thinking on specific plays.

"He looks at things through a quarterback's eyes," Capers said.

That means McCarthy can tell defensive players what a quarterback might be thinking based not just on the personnel group and position alignment he's facing on a given play, but based on the way a particular defensive player lines up. And he's alerting them to some of the offense's tells as well.

"He pointed out something specifically on two plays (that) looked the same blocking scheme-wise, but they were completely different," defensive lineman Mike Daniels said. "Something as different as the offensive lineman's step, which would look the same but was not. I remember thinking, 'His blocking looks (like) the exact same thing with those two plays, but he was trying to accomplish two completely different things.' "

Said inside linebacker Sam Barrington: "Sometimes I feel kind of dumb, 'How did I not know that?' I'm grateful. I'm looking forward to him to continue to be in the meeting room, because it's helped."

He gave each pair a topic, and the two had to come up with a presentation for the players. It was a contest in which the top four presentations are being shared with the players this week.

"We're trying to educate as much as we can," McCarthy said. "Defensively how the offense thinks, offense more about how the defense thinks, and things like that. So it's something I think we all realize — players grow as they're here, two, three, four, five years. But, frankly, you don't have that long. We're just always trying to increase the learning."

The change appears to have allowed McCarthy to take a consistently more panoramic view of his team than in the past. That can't be bad.

Of course, this is still the offseason, so it's more talk than anything. We'll see in the fall whether the changes made much difference, and whether the Packers have a net gain from McCarthy relinquishing the play-calling.

"Just trying to, once again, just spread the knowledge," McCarthy said, "raise the football IQ of our football team."