Nelson loss big but not fatal

Nelson loss big but not fatal 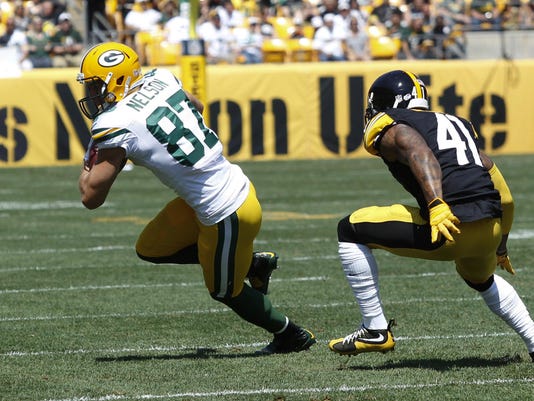 PITTSBURGH – This was the kind of preseason nightmare every NFL team fears.

The Green Bay Packers' road to the Super Bowl just got tougher Sunday because one of their best players, receiver Jordy Nelson, sustained an apparent season-ending injury in a game against the Pittsburgh Steelers that doesn't count in the standings.

According to a report on NFL.com, Nelson has a torn ACL. The blow is significant, no doubt. This is a player who put up 1,519 yards receiving and 13 touchdowns last season, and over the last four years ranks No. 4 in the NFL in touchdown receptions (43) and sixth in receiving yards (4,841).

But as tough as it is for coach Mike McCarthy and general manager Ted Thompson to take, this far from fatal to the Packers' Super Bowl chances. To start with, they still have Aaron Rodgers. He's their indispensable player, and as long he's upright and functioning, this team is a championship threat. That's how it works in the NFL.

After Rodgers the player the Packers can least afford to lose is linebacker Clay Matthews. He's the straw that stirs their defense. He might not be indispensable, but he's the next-best thing.

Green Bay Packers wide receiver Jordy Nelson walks off of the field Sunday against the Pittsburgh Steelers during the first half at Heinz Field. Jason Bridge-USA TODAY Sports
Fullscreen

Aug 23, 2015; Pittsburgh, PA, USA; Pittsburgh Steelers cornerback Kevin Fogg (30) and Green Bay Packers wide receiver Jeff Janis go for a loose ball after a missed punt during the second half of the game at Heinz Field. The Steelers won the game, 24-19. The play was ruled that the receiver never touched the ball and the play was therefore dead. Jason Bridge, Jason Bridge-USA TODAY Sports
Fullscreen 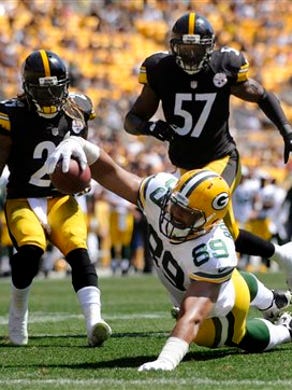 Green Bay Packers guard T.J. Lang (70) is tended to after being injured in the first half of the NFL pre-season football game, Sunday, Aug. 23, 2015 in Pittsburgh. Don Wright, AP
Fullscreen 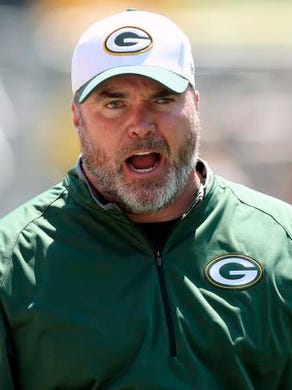 Pittsburgh Steelers center Maurkice Pouncey (53) lays on the field after being injured against the Green Bay Packers during the first half at Heinz Field. Jason Bridge-USA TODAY Sports
Fullscreen

Shamarko Thomas #29 and Cam Thomas #93 of the Pittsburgh Steelers sack Scott Tolzien #16 of the Green Bay Packers in the first half of a preseason game at Heinz Field on August 23, 2015 in Pittsburgh, Pennsylvania. Getty Images
Fullscreen 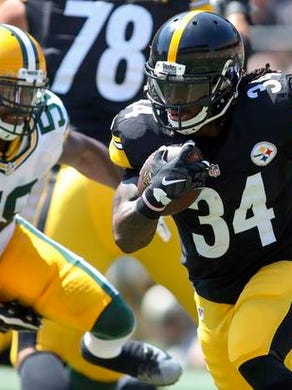 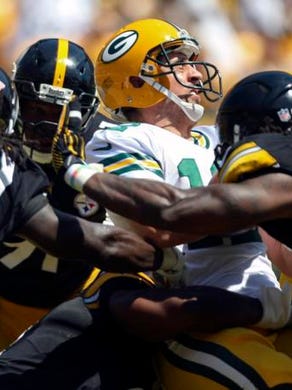 Green Bay Packers quarterback Aaron Rodgers (12) is sacked by the Pittsburgh Steelers defense for a safety during the first half at Heinz Field. Jason Bridge, Jason Bridge-USA TODAY Sports
Fullscreen

Green Bay Packers running back Eddie Lacy (27) runs for a touchdown in the first quarter of the pre-seaon NFL football game against the Pittsburgh Steelers, Saturday, Aug. 23, 2014 in Pittsburgh. Vincent Pugliese, AP
Fullscreen

After him it's Eddie Lacy. Then it's probably Nelson, Julius Peppers, or because of the lack of depth at tackle, maybe David Bakhtiari or Bryan Bulaga.

Regardless, even without Nelson the Packers still have enough weapons for an excellent offense, even if they're no longer the potential record-setting juggernaut they looked like coming into the season.

Randall Cobb becomes their No. 1, and second-year pro Davante Adams their No. 2. Much will fall onto Adams' shoulders. And Ted Thompson's decision to draft a receiver, Ty Montgomery, with his third-round pick last spring when he had more imminent draft needs looks smarter than ever. The Packers are going to find out in a bigger way than they'd planned whether Montgomery really is ready to be a significant player as a rookie.

The loss of Nelson, if it proves true, is two-fold: he stretches the field better than the rest of the Packers' receivers, and he has a great chemistry with Aaron Rodgers on back-shoulder throws and scrambles. So the Packers will lose some big plays (and the threat that defenses have to honor), and some shorter ones that keep drives alive by converting third downs.

But as long as the Packers have Lacy, they'll force defenses to honor their run game. That threat is more important than ever with the loss of their best receiving weapon. They might end up running the ball more than they'd probably planned going into the season.

The Packers still have Cobb in the slot, and he's a playmaker.

Adams will be the key. McCarthy called him the MVP of offseason practices, and after a quiet start in camp Adams has looked good though not great. He doesn't have Nelson's long speed, but he's capable of making spectacular catches on fades and back-shoulder throws because of his 391/2-inch vertical jump, long arms (325/8 inches) and strength (he weighs 212 pounds). He's now looking at an 80-plus catch season if he's up to it.

Montgomery is the better bet than Jeff Janis for the No. 3. Though Montgomery has worked primarily from the slot in training camp — he said about 75 percent of his snaps have come there — he has a big enough frame (6-0, 216) to play on the outside. He's been a quick study and one of the surprises of camp because of his ability to run after the catch, though the playmaking hasn't shown up in two preseason games.

Janis has the best size-speed combination of the group at 6-3, 219 pounds and a 4.42-second 40. He probably stretches the field better than any of the remaining receivers and conceivably could be the No. 3. He also had a decent game Sunday (three catches for 25 yards), though he also had a drop and missed a shot at another reception when he didn't get both feet down in-bounds.

Who makes the cut? You be the GM with our Roster Builder

Montgomery and Janis figure to get their share of snaps either way. But Montgomery looks more ready for No. 3-receiver responsibility even though he's a rookie and Janis is in his second season. Montgomery is more polished and consistent.

So Nelson's injury doesn't leave a huge talent hole at receiver, even if losing him is no small matter. But that doesn't change one fact: This was a brutal day for the Packers.

As soon as the report of Nelson's injury being an ACL got around, nothing else mattered much in Sunday's game. Whatever the Packers learned about their second- and third-string personnel wasn't worth the cost of losing their best receiver. They'd have been better off staying home.

Though the Packers didn't confirm Nelson's injury, his likely loss was reflected in their postgame locker room, especially among the veterans. Fullback John Kuhn was grim. Rodgers didn't hide his disdain for preseason games.

"I think a lot of players around the league probably (wish there were no preseason games)," Rodgers said. "At least cut it down, maybe, to a couple."