Insider: Up to Van Pelt, down to injuries

Insider: Thumbs up to Van Pelt, down to injuries on offensive line.

Insider: Up to Van Pelt, down to injuries 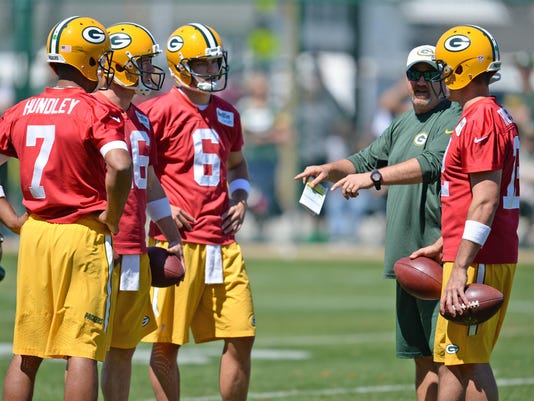 The Green Bay Packers have incorporated a new receiving drill a handful of times in training camp, including Wednesday. A receiver lies down on his back catching throws from position coach Alex Van Pelt, who throws several passes while walking 360 degrees around him. The drill paid off in a recent practice, when Davante Adams slipped at the end of a 10-yard stop route but still caught the pass while on the ground. “They actually used (the catch) in the technique tape the next day when we got together as an offense,” Adams said. “It just shows – I don’t know if that directly had something (to do with it) but that type of drill is worth working on because sometimes you won’t end up on your feet or you’re looking (back) and there will be a ball coming over the top. So it helps on things like that.” Van Pelt said offensive quality control assistant Luke Getsy came to him with the drill, and he loved it. It’s another way to challenge receivers’ eye-hand coordination and ability to track the ball coming in at unusual angles. “You put them in the most stressful position,” Van Pelt said, “so if it does happen, the easy catches are easy and the hard catches become average catches. Stress’em out.” Van Pelt said he’s always open to drills that test players in new ways. It’s most common when he’s coaching quarterbacks, where he’ll take a new throw that a quarterback tried in a game and simulate it with a drill on the practice field. The new receiving drill is another way to hone receivers’ skills along with the more standard work such as catching short, hard passes from the Jugs throwing machine, and working on toe-drag receptions along the sidelines. “You have to be creative,” Van Pelt said. “I think it keeps those guys into it, and then when they see it on film that what you just worked on for the last week shows up, that gives you validation.”

The Packers have so many injuries on their starting offensive line that it won’t be a surprise if quarterback Aaron Rodgers doesn’t play in this week’s preseason game against Philadelphia. The Packers had three starters miss practice Tuesday and Wednesday – left tackle David Bakhtiari (knee), left guard Josh Sitton (ankle) and right guard T.J. Lang (concussion). The team doesn’t practice Thursday and has only a short, brisk practice Friday, so appears likely all three will sit out Saturday’s game. Coach Mike McCarthy hasn’t said whether Rodgers will play, but Rodgers took only a limited number of snaps in team drills Wednesday, which suggests he’ll play little if at all. The starting offensive line in practice included Don Barclay at left tackle, Lane Taylor at left guard and Josh Walker at right guard. McCarthy might be unwilling to risk Rodgers’ health for even one series playing behind a line that has three backups and has been together for only a couple days. The Packers are looking at Barclay at left tackle for a second week even though he allowed two sacks (including one for a safety) and at least one quarterback hit, and also was called for a holding penalty at that position last week against Pittsburgh. Barclay has been struggling in his return from knee-reconstruction surgery last year. When asked if he still thinks Barclay can become a backup at left tackle, offensive line coach James Campen said: “Anywhere on the line. He’s just such a headstrong guy. Remember this guys started 19, 20 games as a(n undrafted) free agent. Who knew? And did a pretty darn good job. Got thrown in there. The guy’s got a lot of character, works his tail off. Eventually this will turn. Let’s hope it does this week, and it should.”

■ The Packers’ nickel personnel in the secondary is the same now, with a week left in training camp, as it was when camp opened: Sam Shields and Casey Hayward at outside cornerbacks, and Micah Hyde the nickel back. When the defense subbed out one of their three cornerbacks Wednesday, the first player in was first-round pick Damarious Randall. He played as an outside cornerback, and Hayward moved into the slot. Second-round pick Quinten Rollins and perhaps undrafted rookie Ladarius Gunter are battling with Randall for the job as No. 4 cornerback.

■ Mason Crosby went 6-for-6 during a live field goal period Wednesday with the distances ranging from 33 to 52 yards. For all of camp, including preseason games, he’s 53-for-58. With Tim Masthay as his holder he’s 47-for-48.