Top 25: Ranking the most important Packers

Ranking players in order of importance to team based on their abilities, depth behind them

Who are the Green Bay Packers’ 25 most important players?

Here, in reverse order, are rankings by Press-Gazette Media columnist Pete Dougherty. The rankings are based not just on the quality of the player but also the importance of his position or role, and the difficulty the Packers would have in replacing him if injured.

Tough call between Kuhn and Micah Hyde for this spot. Going into training camp, Kuhn wasn't a consideration. But the loss of wide receiver Jordy Nelson and a thin group at tight end could mean a lot more sets featuring three wide receivers and two running backs. Kuhn makes that possible because he blocks better than the tight ends.

For now he’s a starter, though depending on first-round pick Damarious Randall’s growth, Hayward could end up in the nickel role before the season is finished. The rookies Randall, Quinten Rollins and LaDarius Gunter provide the Packers with plenty of cushion at this position, but Hayward probably will be on the field a lot.

An ascending player and the Packers’ future at center. But backup JC Tretter is healthy and playing good football, so the Packers are deeper at center than they were at this time last year.

If Perry and Mike Neal stay healthy all year, they can take some snaps off Julius Peppers, leaving him stronger in December and January. Perry missed 2 1/2 weeks of camp because of a groin injury but returned for the preseason finale.

Though Neal’s health historically has been shaky, Perry’s has been even shakier. The question is, will either or both make it through this season? Neal is a little better rusher than Perry; Perry is better setting the edge against the run. Neal missed the first week and a half of camp while still recovering from abdominal surgery that sidelined him all offseason. He hasn't missed any time since.

He and Morgan Burnett are interchangeable as cover men and run defenders, which gives defensive coordinator Dom Capers flexibility in play calling. It’s no coincidence Burnett had a rebound season in ’14 when he finally had a capable partner. Clinton-Dix also has the upside to make the defense better if he improves significantly in Year 2.

Keeping Eddie Lacy healthy is imperative, so the Packers need to take part of the work load off him without too big of a decline in play. Starks never had the durability to be a full-time back but appears tailor-made for the backup role to Lacy.

Gives the Packers one of the best sets of guards in the NFL, and in other years they’d both be higher on the list. But the improved depth at guard makes other positions a little more important.

Though he’s on the quiet side, he helps run the defense and was a much better player last year when teamed with a quality safety across from him in Clinton-Dix. We’ll see just how important he is if he can’t play in the opener because of a calf injury. His backup, Hyde, is a good football player if less experienced at safety.

The Packers’ best offensive lineman, so his loss no doubt would hurt. But Barclay and an improved Lane Taylor mean the Packers’ depth is better than last year.

Became more conscientious about his diet and workout habits in the last year, and it showed on the scale (he dropped a little more than five pounds) and in his physique. Still, his play in the preseason was up and down. If he plays more like he did early in his career, he could change the outlook of this defense.

Upgraded the inside linebacker position when he became a starter about halfway through last season. But this ranking is more about the depth at this position, which is among the weakest on the roster. Nate Palmer played almost all of camp with his injured hand in a protective club. Fourth-round pick Jake Ryan had his moments and is pushing for the No. 3 job. But at least for now the drop-off from Barrington looks big.

The second-year pro has made a big move from his rookie season and was the defensive line’s best run stopper in the preseason. He’ll be a key player in the Packers’ early-down and short-yardage defenses.

Tight end is one of the weakest positions on the roster, and Rodgers is the clear No. 1. He has a big frame (257 pounds) and among the best hands on the team, so he could be an important target to keep the chains moving and in the red zone. 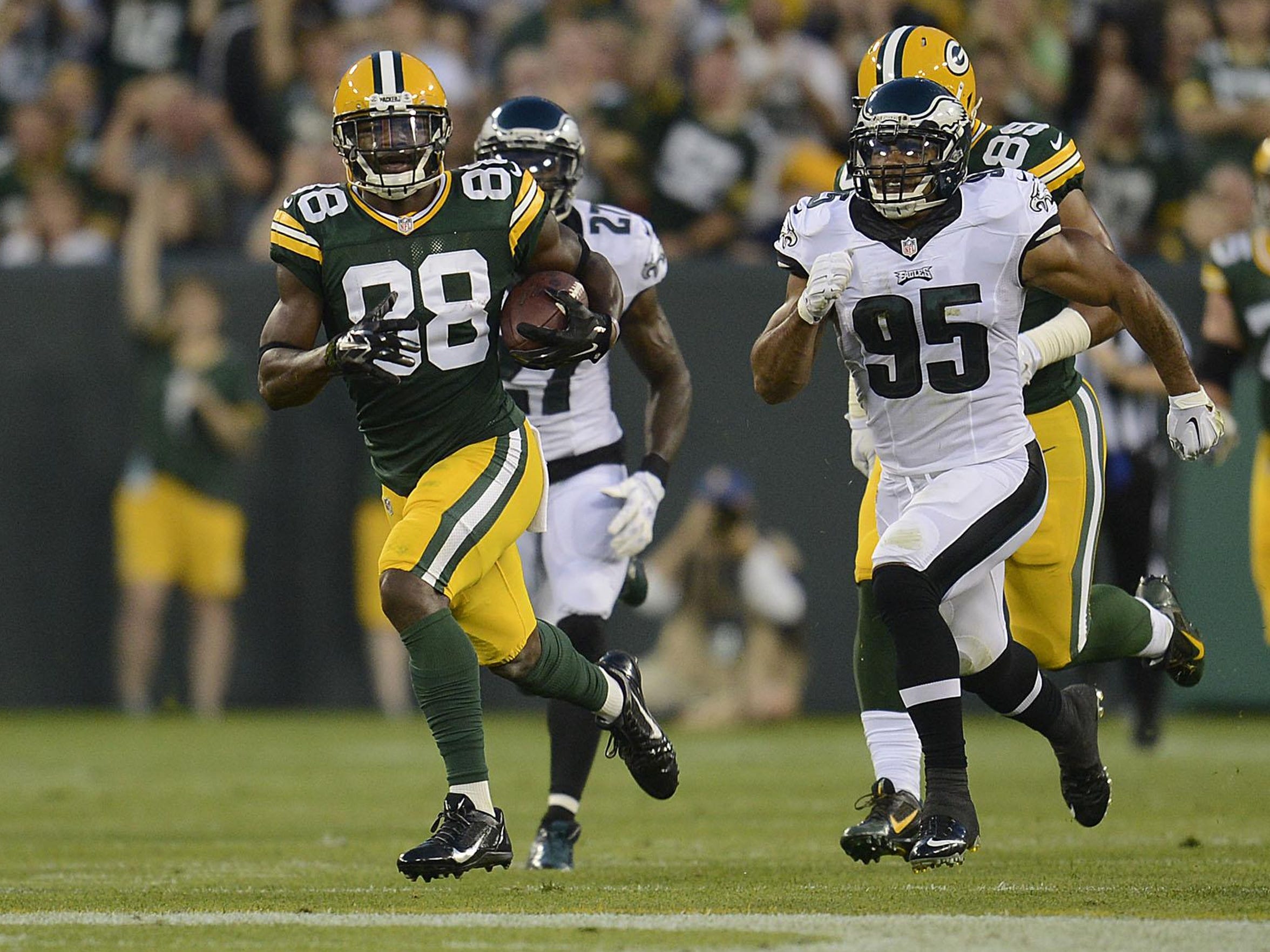 Green Bay Packers receiver Ty Montgomery (88) runs with the ball after making a catch against the Philadelphia Eagles during their preseason game at Lambeau Field.
(Photo: Evan Siegle/P-G Media)

The domino effect of Nelson’s injury means Montgomery probably will have an unexpectedly big role as a rookie. He was one of the early stars of camp and has flashed the talent of a playmaker. The key will be how much he improves during the season, and whether the signing of James Jones hinders that growth.

The Packers are deeper than expected because of their strong class of rookie cornerbacks, but Shields is a cut above at this crucial position. He’s become more polished and still has the speed to outrun mistakes.

Among the better right tackles in the league, and the drop-off to Don Barclay or Josh Walker is substantial.

Barclay’s improved play the last two preseason games has to make the Packers feel a little better about backup tackle. But only a little. Left tackle still is the toughest job on the line, and even if the Packers were to move right tackle Bryan Bulaga to the left side if Bakhtiari can’t play, the line overall takes a big hit.

Worth his weight in gold as the team’s best defensive lineman and inside pass rusher. The Packers have to hope the ankle injury that sidelined him for two weeks in camp doesn’t linger and affect his play.

No one was sure what the Packers were getting from him as a free agent last year at age 34. He ended up being their second-best defensive player. The Packers need one more year of that quality from this aging 14-year veteran with freakish talent.

The Packers feel great about their 2014 second-round pick. Now they need him to be a difference maker in Nelson’s spot.

The Packers have to win with offense, and Nelson’s injury increases the value of all their remaining receivers. Though Cobb is a slot receiver, he’s their No. 1 target now.

As bad as it was lose to Nelson, losing Lacy probably would have been worse. The threat of him running changes the way defenses play the Packers. He can beat them if they don’t game plan to stop him.

Proved his enormous value last season. In the eight games before he moved from outside linebacker to inside linebacker, the Packers ranked No. 19 in points allowed and No. 25 in yards allowed. In the final eight games, they were Nos. 9 and 6. He’s the closest thing the Packers have to an indispensable player on defense.

Is there a team whose quarterback doesn’t occupy this spot? The Packers are among the NFL’s Super Bowl favorites because they have the league’s reigning MVP.

Share
Enjoy a limted number of articles over the next 30 days
Subscribe Today
Log In
Subscribed, but don't have a login?
Activate your digital access.
Join the Conversation
To find out more about Facebook commenting please read the
Conversation Guidelines and FAQs

Top 25: Ranking the most important Packers

Ranking players in order of importance to team based on their abilities, depth behind them