So if you were looking for reasons why Ted Thompson drafted cornerbacks with his first two draft picks this year, you saw it Monday night.

Foremost, of course, the NFL is about quarterbacks, and the Packers had a big edge there. But because it's about quarterbacks, it's also about pass coverage, and the Green Bay Packers’ 38-28 win over the Kansas City Chiefs at Lambeau Field showed what a difference a big disparity in cornerback play can make in an NFL game.

The Packers were missing starting safety Morgan Burnett, who didn’t play because of a calf injury. Yet, because of their depth in the secondary, augmented by this year’s draft, they moved nickel back Micah Hyde to safety and still were fine.

The Chiefs, on the other hand, were missing one starting cornerback (Sean Smith because of an NFL suspension) and lost a second (Phillip Gaines) to a game-ending knee injury in the first quarter. They were the opposite of fine.

In fact, the Chiefs’ secondary was a disaster, and Aaron Rodgers spent all night exploiting it.

How bad was it? Rodgers, who’s playing better than ever to start this season, finished with a 138.5 passer rating, threw for 333 yards and led an offense that put up 448 yards total. He moved the ball up and down the field seemingly at will most of the night taking advantage of one-on-one matchups.

The Chiefs already were in tough shape in the secondary coming into this game. Last week their No. 3 cornerback, Jamell Fleming — actually, No. 4 when Smith isn’t suspended — played so poorly they benched him in favor of Marcus Cooper. And when Gaines left the game, the Chiefs’ nickel cornerback was Tyvon Branch, a safety who has been more of an in-the-box run defender than cover man. It showed. 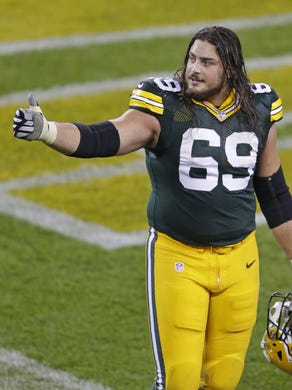 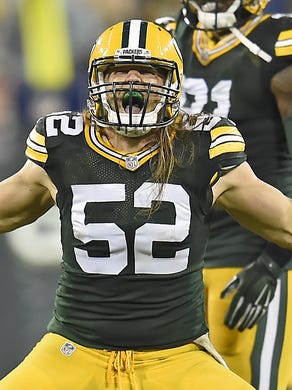 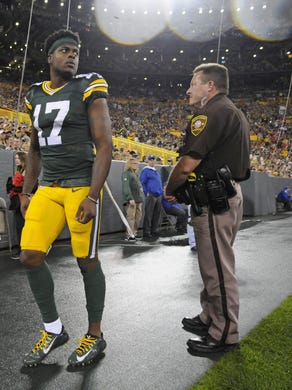 A Packers and Chiefs fan put their headgear back on following the playing of the national anthem. Kyle Bursaw/P-G Media/@kbursaw
Fullscreen 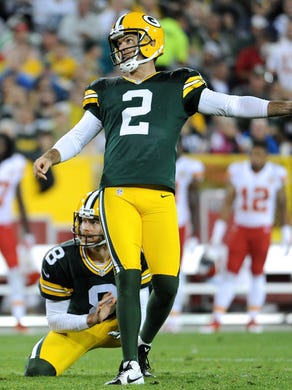 A fan reacts to a call by the referees in the second half of the Packers-Chiefs. Kyle Bursaw/P-G Media/@kbursaw
Fullscreen 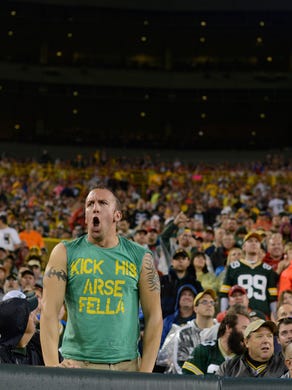 A fan reacts to a call in the second half of the Packers-Chiefs game. Kyle Bursaw/P-G Media/@kbursaw
Fullscreen

Green Bay Packers inside linebacker Clay Matthews (52) makes his way to the tunnel after the victory. Kyle Bursaw/P-G Media/@kbursaw
Fullscreen 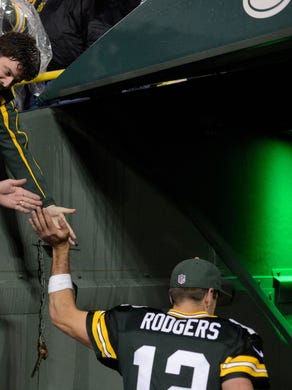 Green Bay Packers receiver James Jones is tackled after a short catch and run in the second half. Wm. Glasheen/P-C Media/@WmGlasheen
Fullscreen Kansas City Chiefs running back Jamaal Charles (25) dives in for a touchdown as Green Bay Packers inside linebacker Nate Palmer (51) hangs on to his ankles in the second quarter. Kyle Bursaw/P-G Media/@kbursaw
Fullscreen

9. Alex Smith, Washington Redskins($23,500,000 Avg./Year) Arriving in a trade from the Kansas City Chiefs, Smith signed a four year extension with Washington in March. The 33-year-old Smith led the NFL in passer rating (104.7) in 2017 and set career highs in passing yards (4,042) and touchdowns (26) while throwing just five interceptions. Smith led the Chiefs to four playoff appearances in the past five years and threw for 102 touchdowns and 33 interceptions in that span. Dan Powers/USA TODAY NETWORK-Wis
Fullscreen

Green Bay Packers running back Eddie Lacy runs for a first down against the Kansas City Chiefs as Derrick Johnson looks to make a tackle. Wm. Glasheen/P-C Media/@WmGlasheen
Fullscreen

Green Bay Packers running back Eddie Lacy runs up the middle in the second quarter against the Chiefs. Wm. Glasheen/P-C Media/@WmGlasheen
Fullscreen

Green Bay Packers receiver Randall Cobb runs side by side with tight end Richard Rodgers after a reception in the first quarter against the Kansas City Chiefs. Wm. Glasheen/P-C Media/@WmGlasheen
Fullscreen

Two Packers fans high-five after a play in the first quarter against the Chiefs. Kyle Bursaw/P-G Media/@kbursaw
Fullscreen 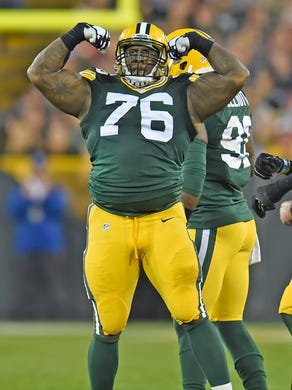 Green Bay Packers running back Alonzo Harris (46) kneels in the end zone before the game against the Chiefs. Kyle Bursaw/P-G Media/@kbursaw
Fullscreen

A Packers fan displays a sign about Jordy Nelson during the game against the Chiefs. Kyle Bursaw/P-G Media/@kbursaw
Fullscreen

Packers alumni Boyd Dowler reaches out to Willie Davis as they make their way from their bus to the alumni tent outside Lambeau Field. Kyle Bursaw/P-G Media/@kbursaw
Fullscreen

Nine-year-old Coleton Wright, of Roanoke, Va. reacts after seeing a player walk into the building from the parking lot. Kyle Bursaw/P-G Media/@kbursaw
Fullscreen

Kathy Remmers of Orient, S.D. makes a sign for the game in the parking lot. Kyle Bursaw/P-G Media/@kbursaw
Fullscreen

Rodgers generally stayed away from the Chiefs’ first-round pick, Marcus Peters, who had three interceptions in the first two games, and spent most of the night throwing at Cooper and Branch. In the first quarter alone Cooper gave up an eight-yard touchdown to rookie receiver Ty Montgomery; a 27-yard touchdown when he slipped in the end zone, which allowed James Jones a 27-yard touchdown on a free play (the Chiefs were offsides); and had a holding penalty that kept alive a Packers drive.

Branch had a rough time playing in the slot all night. He was matched primarily against Cobb, and the Packers’ flanker finished the game with seven catches for 91 yards and three touchdowns. And on a fourth-quarter play on which he was matched against Jones, Branch fell down while backpedaling and left Jones uncovered for a 52-yard gain.

So even though the Packers are playing the season without injured Jordy Nelson and lost starting receiver Davante Adams on the first series when he aggravated an ankle injury, the matchups worked in their favor. With Cobb, Jones and Montgomery, the Packers always had a big edge somewhere.

This game also showed the key role running back Eddie Lacy plays because he makes defenses honor the run game. The Chiefs spent most of the game with a single-high safety in coverage while the other was playing the run near the line of scrimmage. 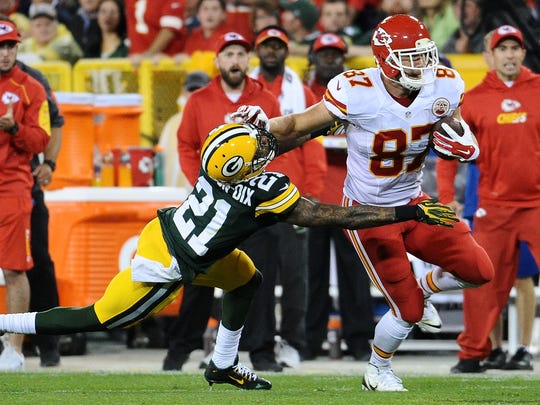 Though Lacy didn’t have a big game statistically (10 carries for 46 yards), the single-high safety set up the one-on-one matchups, and Rodgers delivered. Like Cobb, Jones had seven receptions (for 139 yards) and Montgomery had two catches, including the eight-yard touchdown.

The Packers' secondary, on the other, matched up more than well enough against a Chiefs receiving corps that hasn’t caught a touchdown pass dating back to the 2013 season. They have one big threat at receiver in Jeremy Maclin, who was a free-agent signing in the offseason, and another in tight end Travis Kelce. And their quarterback, Alex Smith, can't come close to doing for his receivers what Rodgers' arm talent, athleticism and awareness does for his.

With Burnett out and Hyde moved to a starting safety spot, first-round pick Damarious Randall played most of the game as the Packers' No. 3 cornerback, and he turned in a credible performance. The main bad mark on his night was getting beaten by Maclin for a 61-yard play in the fourth quarter, when the Chiefs made a late run at respectability. And the Packers even subbed out Randall late, with second-round pick Quinten Rollins in his place. You can bet Chiefs coach Andy Reid would have killed to have both on his roster Monday night.

With Sam Shields and Casey Hayward manning the other cornerback spots, the Packers held Smith to only 39 yards passing in the first half and an 80.2 rating for the night. The Chiefs ended up with OK numbers (Smith finished with 290 yards passing) but most of it came in the fourth quarter when the Packers were in more of a prevent mode.

Of course the greatest truth in this game, like in many games, was that the difference in quarterbacks was decisive. But then that’s the difference in games more often than not anyway. But we saw Monday night why cornerbacks are so important in this league too.