Return to play calling won't solve all of Green Bay's issues on offense, but it's a start 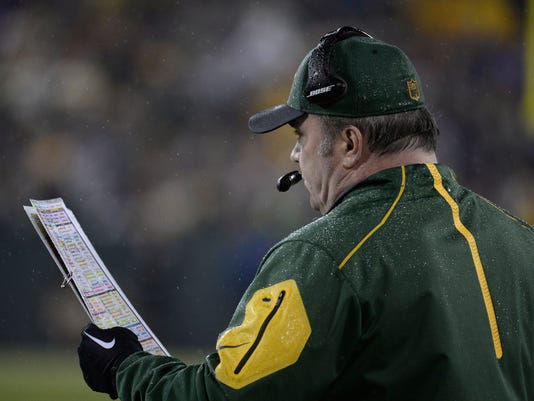 Mike McCarthy did what he had to do.

The Green Bay Packers coach took back play calling from Tom Clements this week, and he was right to do so.

It’s not that McCarthy solved all his offense’s issues in the Packers’ 28-7 win over the Dallas Cowboys on Sunday at Lambeau Field. With him at the helm the Packers still blew a scoring chance from the goal line and had four scoreless possessions to open the second half that kept this a one-score game into the fourth quarter.

But there was no mistaking that the Packers looked different, and by different I mean better. Their tempo was faster than it had been for weeks, really months. They got off 81 plays, and while that was due in part to converting half their 14 third downs, it sure looked like the operation of getting the call to Rodgers was quicker than it had been with Clements. That in effect lengthens the game and can get a defense playing faster than it would prefer, which is the whole idea of an up-tempo offense.

The Packers also were as balanced as they’ve been all season. McCarthy went to the run early and stuck with it throughout. Eddie Lacy and James Starks combined for 35 carries and 195 yards rushing.

There were more short, quick-rhythm passes, too. And Starks’ 13-yard touchdown run early in the second quarter was one of the most creative plays of the year, with Randall Cobb also lined up in the backfield, fullback John Kuhn split out as a receiver to the left and Starks taking the misdirection handoff going right while almost everyone else headed the other way.

Lacy’s return to good graces after being demoted last week for missing curfew was especially important because if the Packers are to become a legit Super Bowl contender here at the end of the season, Lacy has to become a major part of their offense. Even with Jordy Nelson, the Packers were always better with Lacy complementing. Now without Nelson, Lacy is the second-most important player on the Packers’ offense, and they don’t have the playmaking to beat good defenses unless he’s a viable threat to win the game on the ground.

So no, the Packers didn’t suddenly become an offensive juggernaut and the NFC favorite to win the Super Bowl. They still lack playmaking in the passing game, and Arizona and Carolina have to rate as the NFC’s top contenders at this point.

But the Packers’ prospects of making a late run have improved, based on a performance Sunday that included 435 yards in total offense and a 28-point game that would have been 35 if not for failing to score on three straight plays from the Cowboys’ 1 in the first quarter. The question now is whether McCarthy can find some more punch from his receiver corps down the stretch.

It’s safe to say McCarthy did not come to this decision easily. He would have been justified making the move a few weeks earlier, but his respect for Clements likely held him back. This move damages Clements’ hopes of becoming a head coach, perhaps irreparably.

But McCarthy’s obligation is to the organization. All evidence from the last nine years with McCarthy calling plays, then this year with him not, says the team is better when he’s running the offense.

“The personal part of it was brutal,” McCarthy said of the change. “Professionally I felt like I had to do it.”

Rodgers: Execution, not play-calling was key

McCarthy had handed over play-calling to Clements in the offseason for all the right reasons. The debacle that was the final four minutes at Seattle in the NFC championship last January alone should have been enough to get any head coach to seriously consider taking on a more panoramic role.

He also wanted to spend more time during the week with the defense and special teams, and there’s reason to think that helped both areas this season.

But the Packers have one of the game’s elite quarterbacks and have to win with offense. And after 12 games, the new setup just wasn’t working. Even without Nelson, this should be one of the better offenses in the NFL, and it hasn’t been close to that for most of the last two months (No. 22 in yards and No. 12 in points coming into Sunday).

With the way things were going, the Packers probably were on course for a playoff berth, but they weren’t going to last long in the postseason. Something big had to change.

So there was McCarthy, back in the play-calling saddle Sunday afternoon. Instead of watching the defense between offensive series, as he had been doing this season, he hovered over his call sheet at the opposite end of the bench preparing for the next time he had the ball, as he had the previous nine years as play caller.

What was different this time, he also consulted a computer tablet and one or two of his analytics assistants. When it comes to analytics McCarthy never reveals much, but it’s clear it’s playing a bigger role on game day than even when he called plays last year.

“It’s a network of information,” McCarthy said. “You listen to what’s happened and now you’re able to grab that. It’s an incredible teaching tool. I think it’s helped all of us, players and coaches.”

Thumbs up to play-calling, down to run 'D'

A few weeks ago, I had called former Packers coach Mike Holmgren about another matter, and near the end of our conversation I asked him about play-calling. He offered no opinion on whether McCarthy should take back the play-calling, but he made two points.

One, he said that a head coach’s duties includes no shortage of drudgery and unpleasantness. So if a head coach likes calling plays, he should do it.

Two, he rated McCarthy as one of the best play callers in the game today.

Going into the season, a decent share of Packers fans probably would have disagreed. I suspect that number is a lot smaller now. Green Bay Packers running back James Starks (44) breaks into the secondary for a touchdown against the Dallas Cowboys at Lambeau Field. Evan Siegle/P-G Media/@pgevansie
Fullscreen

Green Bay Packers running back Eddie Lacy is down on the one yard line following a fourth quarter run against the Dallas Cowboys Wm.Glasheen/P-C Media
Fullscreen 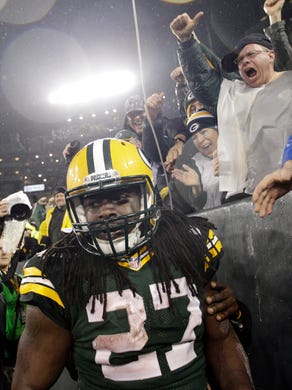 Green Bay Packers running back Eddie Lacy (27) runs through the defense on the fourth quarter against the Dallas Cowboys at Lambeau Field. Evan Siegle/P-G Media/@pgevansie
Fullscreen 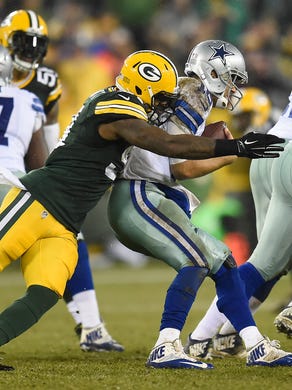 Green Bay Packers' James Starks waves to the crowd after a victory against the Dallas Cowboys. Dan Powers/P-C Media/@powrpics
Fullscreen 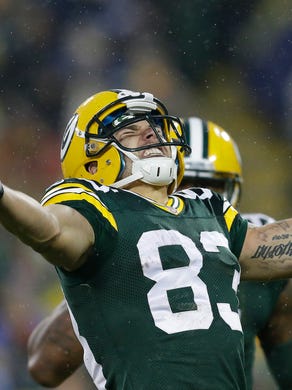 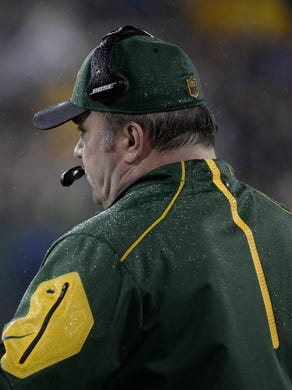 A Green Bay Packers reacts to a call being reversed in the first quarter. Kyle Bursaw/P-G Media
Fullscreen

Green Bay Packers wide receiver James Jones (89) looks up to the stands before the start of the game against the Cowboys. Kyle Bursaw/USA TODAY NETWORK-Wisconsin
Fullscreen

A fan cheers during the first quarter of the Packers-Cowboys game. Kyle Bursaw/P-G Media
Fullscreen

Green Bay Packers linebacker Jayrone Elliott (91) looks up before the start of the game against the Dallas Cowboys. Kyle Bursaw/P-G Media
Fullscreen 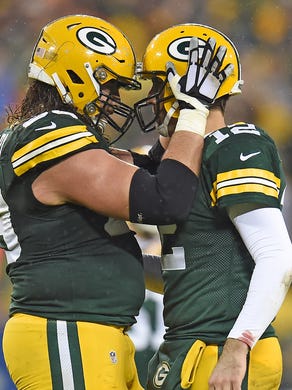 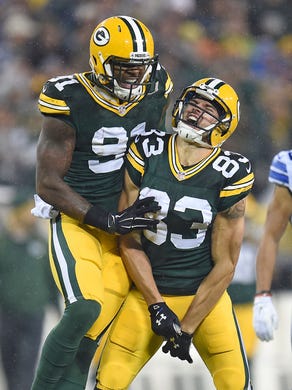 Green Bay Packers cornerback Sam Shields (37) is escorted off the field after being injured against the Dallas Cowboys at Lambeau Field. Evan Siegle/P-G Media
Fullscreen

Green Bay Packers quarterback Aaron Rodgers (12) is tackled from behind on a scramble against the Dallas Cowboys at Lambeau Field. Evan Siegle/P-G Media
Fullscreen

Packers fans and Cowboys fans tailgate together in the rain before the teams' Week 14 game at Lambeau Field. Wm. Glasheen/P-C Media
Fullscreen

Fans in ponchos climb the stairs in the rain before the Packers-Cowboys game at Lambeau Field. Wm. Glasheen/P-C Media
Fullscreen

Scott Westeor fills a water bottle from a puddle to douse his grill before the Packers-Cowboys game at Lambeau Field. Wm. Glasheen/P-C Media
Fullscreen

Fans look on as the Lambeau Field grounds crew removes the tarp during a steady rain before the Packers-Cowboys game. Dan Powers/P-C Media/@powrpics
Fullscreen

Lambeau Field grounds crew members remove the tarp from the field during a steady rain before the Packers-Cowboys game. Dan Powers/P-C Media/@powrpics
Fullscreen 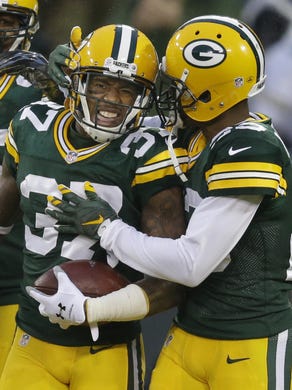