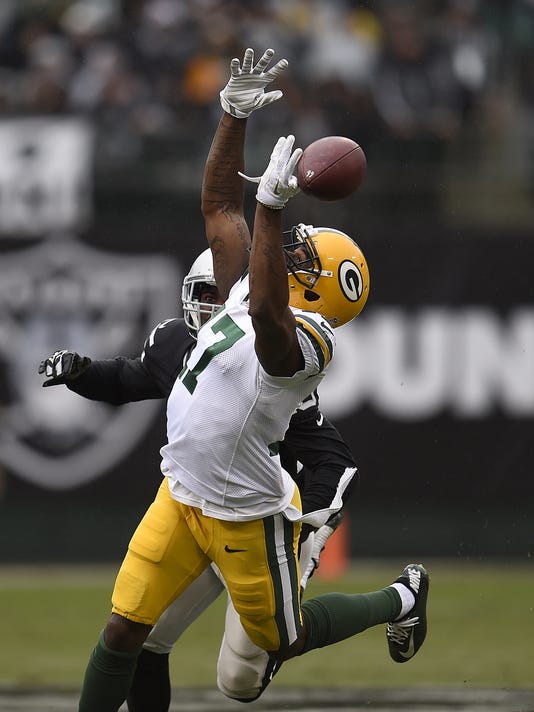 What else can you conclude about a position group that has underperformed since coach Mike McCarthy’s offseason staff changes, which included placing the receivers and quarterbacks under the purview of one assistant?

I say that without blaming McCarthy for trying. His stated reason for the change had merit: to improve communication between the positions by giving them the same coach and having them meet and watch video together regularly.

McCarthy took a risk and tried a setup you don’t see in the NFL. The league probably needs more of that. If it had worked, he would have been an innovator.

But it didn’t work. Without Jordy Nelson, the receivers have been the Packers’ most disappointing position group. The Packers rank No. 26 in the NFL in passing yards, which is incredible for a team with Aaron Rodgers at quarterback. While there is plenty of responsibility to go around, the Packers' receivers are neck deep in it.

They needed 2014 second-round pick Davante Adams to be a player this season, but there’s no sign through 14 games (43 catches, 9.0-yard average) that he has improved from his rookie year. Another second-year pro, Jeff Janis, remains raw and is having trouble getting on the field, even though he’s the team’s biggest and fastest receiver. And even Randall Cobb has dropped an inordinate number of passes. According to Pro Football Focus, he has the fourth-highest drops rate of all qualifying receivers in the league at 11.4 percent.

To be clear, this isn’t an indictment of receivers coach Alex Van Pelt. He’s also coaching the quarterbacks, which has to be his priority. That’s the position with which teams live and die.

I also have to note here that assessing NFL position coaches from the outside looking in can be a hopeless endeavor. In a few cases it might be obvious over time that an assistant is uncommonly good or bad by how his players develop or if, for instance, they consistently seem to overachieve or underachieve.

But far more often it’s nearly impossible to know unless you’re in a team’s office every day. So much depends on the talent the coach has to work with, and it’s hard to see where one ends and the other begins.

You can ask around the team and league to get a sense of the staff, and that helps. But even the reliability there goes only so far.

That said, everything I’ve heard about Van Pelt has been good to excellent. One source said McCarthy last offseason denied two teams that wanted to interview Van Pelt for a coordinator’s job. And an NFL scout who knows Van Pelt said he thinks the Packers assistant is a future head coach in the league.

But it’s apparent now that enough goes into the daily work with receivers to demand one coach's full-time attention. As it is, coaching of the Packers’ receivers is split among three assistants: Van Pelt, who works with the quarterbacks when on the field; Luke Getsy, the offensive quality control coach and offensive coordinator Edgar Bennett, who coached the receivers from 2011-14.

While the Packers might have gained from the joint meetings with receivers and quarterbacks, it’s clear something more has been lost by not having one coach handling almost all the hands-on work with receivers on and off the field. Bennett’s strengths as receivers coach were his attention to detail and ability to drive home fundamentals daily. Their performance this season suggests the receivers miss that consistency.

McCarthy next season still might want his receivers and quarterbacks meeting together regularly so each better knows what the other is thinking. But he has to separate the coaching jobs.

And if McCarthy was willing to take back play calling from Tom Clements during the season, it’s a pretty safe bet he’ll make this change, too. The question then is, what happens with Clements?

Clements’ title is associate head coach/offense, but he’s in no-man’s land. On game day, his duties are back to last year’s, when he suggested plays to McCarthy and watched the opponent’s secondary for personnel and coverages. But as play caller earlier this season, his primary duties during the week were compiling the game plan and putting together the call sheet. That’s now back in McCarthy’s hands.

Clements no doubt signed a new contract with his offseason promotion, so he has at least one and possibly two years left on that deal. However, who knows if he’ll want to stay. And if so what would his duties would be?

I’m sure there’s a chance it could work out. But I also know that it’s difficult for someone to accept a demotion and continue working for the same boss. The resentment is too hard for most of us to overcome. I’ve seen it in my business and in the NFL, as well.

For instance, Mike Sherman changed after former Packers CEO Bob Harlan stripped him of his general manager duties in 2005. Sherman was distant and uncommunicative with his new GM, Ted Thompson, and from what I’ve been told that was nearly as big a factor in Thompson firing him as his 4-12 record in their one season together.

The 61-year-old Clements has worked with McCarthy since ’06, so maybe they could make it work. But McCarthy already has an offensive coordinator in Bennett, so assuming McCarthy retains the play calling, he’ll have to figure out a new way to divvy up duties with a top-heavy staff.

A survey of all the coaching staffs in the NFL shows 12 teams include a coach whose title is some form of assistant head coach or senior assistant, but who has no position group or coordinator in his title.

For one team, that senior assistant runs his side of the ball and calls plays: Tennessee’s Dick LeBeau (assistant head coach/defense).

For at least one other, the title appears to have been a way to retain a young coach other teams were trying to hire: Seattle’s Rocky Seto (assistant head coach/defense).

And for the others, the title was given to someone such as Clements: a former head coach or long-time NFL assistant who doesn’t run his side of the ball and appears to serve as an adviser as much as anything.

So McCarthy could make up a new title and place for Clements on the staff.

On the other hand, Clements might prefer moving on. This year’s demotion will hurt his chances of landing a play-calling position with another NFL team, but you never know. And his track record as a quarterbacks coach — Rodgers credits Clements for much of his development as a player — means he’d be a highly qualified candidate for that job with any team.

That also raises the question of whether McCarthy would bring back Joe Philbin in some capacity next season after he was fired as the Miami Dolphins’ head coach this year. Even if Clements leaves, the Packers won’t have an obvious position for him, though McCarthy always could create a role if Thompson gave him the OK.

Regardless, one thing’s for sure. This season has shown that McCarthy’s receivers need a coach all their own.