Defensive lineman's new contract quickly surpassed, but no blaming him for signing early 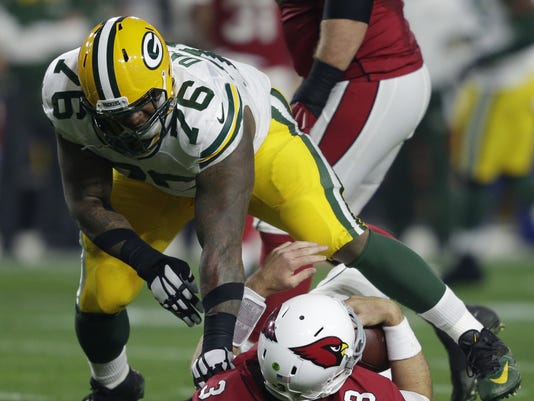 First down: Sure, it now looks like Mike Daniels should have waited a couple months to re-sign with the Packers. Former Denver Broncos defensive lineman Malik Jackson’s free-agent contract with the Jacksonville Jaguars (five years, $17.1 million average, $42 million guaranteed) in March dwarfed Daniels’ deal with the Packers in December (four years, $10.25 million average, $21.6 million over the first 15 months).

But when the money gets this big, I’m not faulting a guy for taking the bird in the hand and unloading some injury risk on the Packers, as Daniels did last December and Jordy Nelson did twice before him.

Yeah, compared to Jackson’s contract, Daniels immediately became underpaid. I don’t know that anyone would have offered him Jackson’s money, but it’s safe to say Daniels could have signed for significantly more than he did – maybe with the Packers, but maybe not – if he’d waited until after the season to do a deal.

But when Daniels signed in mid-December, it looked like the Packers conceded he was going to strike it big and ponied up. Importantly for Daniels, they also took on the injury risk for the final five games (three regular season, two playoffs).

That risk is no small thing. If Daniels had torn an ACL or Achilles tendon, or suffered some other potentially career-diminishing injury in those five games, his earning power would have plummeted. But by taking the offer, he ensured he’d receive an enormous amount of money – probably $21.6 million – even if disaster hit in the final five weeks. So yes, he ended up leaving a lot of money on the table. But he still made out extremely well.

“When I got signed I was hearing a lot of things, ‘Wow, that’s a lot of money, he’s overpaid,’” Daniels told me recently. “As soon as (Jackson) signed, it (changed to), ‘Oh wow, we’re glad we got him.’ It’s funny how that works. To me, none of that matters. I’m glad to be in Green Bay, this is a great place to be. I don’t know why you’d leave.”

Jordy Nelson unfazed in his comeback

Second down: Jordy Nelson offered some advice to all the Packers’ young receivers Monday, but I wonder if he especially had Jeff Janis in mind.

Nelson was one of three players the Packers made available for large-group media interviews Monday, their first day of the offseason workout program, and was asked how he could help the young receivers. Specifically, that meant Janis, Jared Abbrederis and Ty Montgomery.

Janis, especially, should be in position to push Davante Adams for the wide-open No. 3 receiving job because he has the size (6-feet-3) and speed (4.42-second 40) of a true outside receiver, whereas Abbrederis and Montgomery are shorter, slot-type players.

Janis famously had trouble getting on the field last year because Aaron Rodgers and the coaching staff didn’t trust his route running – some combination of his ability to get off the line, read coverages, interpret audibles and be at the right place at the right time.

The Packers blew it with Janis – his seven-catch, 145-yard performance in the team’s divisional round playoff loss at Arizona strongly suggested that, mistakes and all, he could have helped their receiver-poor offense if they’d played him regularly.

That game at least gave Janis a jump start for 2016. He now has a full offseason to move up the depth chart. Nelson, in the meantime, advised him and the other young receivers to emphasize classroom work this offseason.

“That, to me, (is) the key is understanding what (the quarterbacks) want done and how they want it done,” Nelson said, “because if you’re not on the same page with them, you won’t ever – it’ll be tough to be productive. I think that’s where it starts, and then transferring that over into the field. …

“We’ve said it for years: Aaron (Rodgers) wants to see you make plays in practice and carry it over into the game, and that builds the confidence.”

Third down: Rodgers had his first in-person look at new tight end Jared Cook on Monday in the team’s first offseason workout – Phase I of the program is strength and conditioning only, no football – but didn’t reveal any meaningful thoughts on general manager Ted Thompson’s one noteworthy free-agent signing.

Rodgers, who also met with reporters Monday, said he and Cook spoke on the telephone before the signing became official last month, but he gave no indication how he thinks Cook might help him or the team.

My guess is the low-risk deal (one year, $2.75 million) will improve the Packers’ offense incrementally, because even though Cook never has put up big numbers, he provides a big target who’s athletic enough to threaten defenses down the middle seam. Last year, the Packers had no one to do that. Now they have two players, Nelson (back from ACL surgery) and Cook.

“Talking to Randall (Cobb), (Cook) is a lot bigger, taller than what we expected,” Nelson said. “I think just having another playmaker on the team is always helpful. We’ve always tried, the years we’ve been together, to get as many playmakers on the field as is possible. That adds one more, allows us to have another threat, gives Aaron another option.”

Fourth down: In Daniels’ rookie season of 2012 he watched the debut of the ESPN documentary “Broke,” which told the stories of several professional athletes who blew fortunes. Early on, the show dropped this nugget on its audience:

“By the time they have been retired for two years, 78 percent of former NFL players have gone bankrupt or are under financial stress.”

“Broke” made a strong enough impression that Daniels and his wife, Heaven, who was his girlfriend at the time, decided to take their finances seriously. As part of their continuing education, they recently were among a group of 28 players who attended a four-day Personal Finance Boot Camp the NFL recently sponsored.

Daniels’ new contract might provide financial security for his family for several generations if it's managed well. The boot camp’s underlying mission was to ensure players don’t blindly allow an adviser to handle their money, and that they know what questions to ask and what to look for while monitoring their finances.