Here’s another "4 Downs With Dougherty," with observations from the first day of Packers’ rookie orientation camp Friday.

First down: It looks like Mike McCarthy is among the NFL coaches cutting back on practice time at rookie orientation camp, though he hasn’t yet gone to the lengths of at least two other teams.

Adam Gase, the Miami Dolphins’ new coach, is conducting his rookie camp without the players even taking the field. The Jacksonville Jaguars also are drastically scaling back their on-field work. It’s all because of the injury risk, with much of it going back to last year, when Jacksonville lost the No. 3 pick in the draft, defensive end Dante Fowler, to a torn ACL in the first practice of rookie camp.

McCarthy has cut back on-field work at the Green Bay Packers’ rookie camp this year. Practice Friday was only about 1 ½ hours and there were no 11-on-11, offense vs. defense periods, which always is the most competitive and dangerous part of practice. Every previous rookie camp in McCarthy’s tenure since 2006 had included 11-on-11 work.

McCarthy also is limiting the camp to two days (Friday and Saturday), though NFL rules allow him to practice three days.

“I’d say we’re way ahead of the game,” McCarthy said. “We’ve been doing orientation now for I don’t know how many years. We tweak it each and every year. … What we do on the field is a small part of what is done over the weekend.”

Part of the injury risk comes from putting players on the practice field who haven’t played football since early last January at the latest. Then they’ve spent a good part of the offseason training for the NFL scouting combine and campus workouts for NFL scouts rather than for playing football. And finally, with undrafted and tryout players trying to impress the team, the practices can get more dangerous than desired.

The offseason workout program for veterans, on the other hand, includes several weeks of conditioning and then individual on-field work before embarking on offseason practices.

Second down: At least for now, the Packers’ No. 3 quarterback job appears to be down to Ryan Williams and Joe Callahan. Unless you follow the team extremely closely, you probably know next to nothing about both.

For a guy on an NFL roster, Williams had an uncommonly thin career as a major-college player. He was the starter at Memphis as a freshman but had a lifelong dream of playing for his hometown University of Miami, so when he got the chance he transferred there before his sophomore season. He finally was in line to be Miami’s starter for his senior season, 2014, but sustained a torn ACL in spring practice, and by the time he returned in the fall he’d lost the starting job.

He went undrafted and unsigned by the NFL in 2015. The Packers, who had him in for a pre-draft visit in '15, signed him to a futures contract in January.

Callahan, on the other hand, had a phenomenally productive college career, but at a Division III school. He was a three-year starter who last season threw for 5,063 yards and 55 touchdowns, and was named Division III player of the year.

Williams has prototypical height (6-foot-4), whereas Callahan (6-1) falls short of the 6-2 threshold that NFL teams prefer for their quarterback prospects.

However, based off Friday’s practice, Callahan has more arm talent — his throws have noticeably more zip and truer spin than Williams’. That doesn’t mean he’s the better player — the test there will be 11-on-11 work in training camp. But Friday’s brief glimpse suggests Callahan has a legitimate shot despite his short stature and Division III background.

An interesting addendum to Callahan: He ran a slow 40 for pro scouts (4.98 seconds) but said scrambling is one of his strengths.

“Not so much to run, I’d look more to pass it after I’d broken the pocket and gotten away from some pressure,” he said. “That’s where you see a lot of big plays.”

If the Packers don’t go elsewhere for their No. 3, then the smart money says whichever wins the job will be on the practice squad. That would open a spot on the 53-man roster for another player.

Third down: If you’re wondering what the off-field portion of rookie orientation is like, here’s a thumbnail sketch based on what several rookies described.

They arrived Thursday afternoon and underwent thorough physical exams and uniform fittings for about two hours.

After dinner, they met as a team and watched a highlight reel of the Packers’ last 10 years. McCarthy talked to them about the great chance they have being invited to the camp, even if most of them were undrafted. Then team president and CEO Mark Murphy and general manager Ted Thompson gave short talks about their experiences in the league and the organization’s expectation that they conduct themselves professionally.

After that was a primer to the playbook. That continued Friday morning with offensive, defensive and position meetings and then practice at 11:15 a.m.

“Make sure they’re acclimated so when they do become part of the offseason program starting Monday that they’re ready to go,” McCarthy said.

One small point: If I were the Packers, I’d probably include something about Don Hutson in that welcome video. The rookie practices always are conducted in the Don Hutson Center. I asked several players if they knew who Hutson was. They didn’t, and why would they? He played in the 1930s and '40s. But he is one of the NFL’s true all-time greats. Someone ought to tell them.

Fourth down: Usually players add weight and move to bigger positions as they progress from high school and college to the NFL. Safeties become linebackers, linebackers become defensive linemen, etc. But Blake Martinez did the opposite.

The fourth-round pick started his high school career as a 265-pound defensive lineman. He then worked with a trainer who advised him to improve his diet. He dropped 40 pounds and became a linebacker as a sophomore. He has played there ever since.

Martinez now is meticulous about what he eats. He doesn’t consume alcohol, and dating to the start of his college career he has cut all sweets, including soda, out of his diet.

“I want to be able to say once I'm done with the NFL and my football career,” he said, “that I put everything into it and I don't look back and say, ‘What if I didn't eat sweets? Maybe I could have lasted two more years or I could have ran that much faster.’” 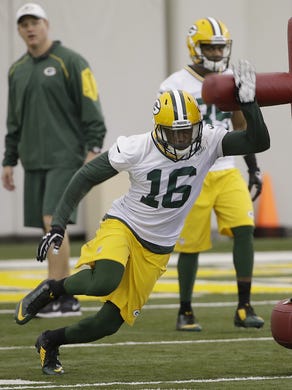 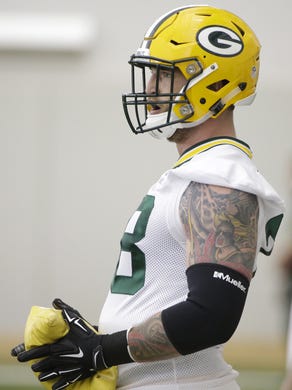