GREEN BAY - Eddie Lacy still is too heavy, and now he has an ankle injury.

But as we saw Sunday night, it’s a really tough slog for the Green Bay Packers when he’s not on the field.

If you were looking for the Packers to springboard off their explosive first-half performance against Detroit before the bye, it didn’t happen Sunday night. Yes, the Packers did enough to beat the New York Giants, 23-16, but after a promising start this offense bogged down again, as has been the case more often than not for a year now.

There were multiple reasons. Aaron Rodgers (65.0 rating) again had several shaky moments, something you rarely saw when he was in his MVP form. Receiver Jordy Nelson had an especially bad drop in the first quarter that took big points off the board. And even with Nelson back this season, the Packers still come up short in the explosiveness department. This is not the quick-strike team of 2011 or even 2014.

INSIDER: Thumbs up to pass defense

In fact, the Packers very well might have to rely on their defense to win its share of games by doing what it’s done so far: stuffing the run, forcing opponents to become one-dimensional, and then coming up with a big takeaway or two in the passing game.

Regardless, as the Packers search early this season for an offensive identity that will put up enough points to beat good teams, it sure looks like they’ll need Lacy to play a major role.

Lacy had a big night Sunday with 81 yards on 11 carries before an ankle injury knocked him out of the game in the third quarter. He had a couple good cutbacks and rumbled through enough tackles to get the crowd at Lambeau Field chanting “Eddie, Eddie” after his carries. A group gathered around the Packers’ tunnel after the game did the same when Lacy left the field several minutes after Rodgers had taken a final knee to run out the clock. So the fans saw he’d played a big role in the win even though he missed the final 1 1/2 quarters.

“He had some pretty incredible second- and third-effort runs,” Rodgers said. “Guys just kind of bounce off him it seems like. The crowd enjoys it, a little too much sometimes when we’re offense, they start chanting his name.”

The problem is, even before Lacy was injured, coach Mike McCarthy usually took him off the field on third down and in the two-minute offense. That meant that in the final 5:02 of the first half, with a chance to add a nice cushion to a 14-3 lead going into halftime, Lacy didn’t play a snap in three series, and the Packers put up only three points.

On the first of those three series, Lacy was replaced by James Starks apparently just for a regular rest. But then the Packers got back the ball twice more in the final two minutes, and Lacy was nowhere to be found. 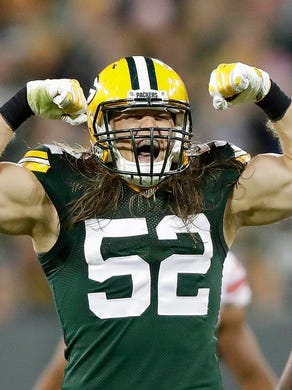 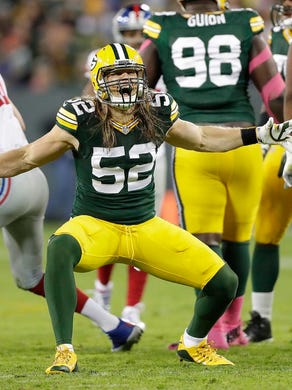 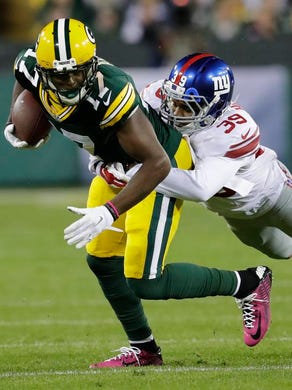 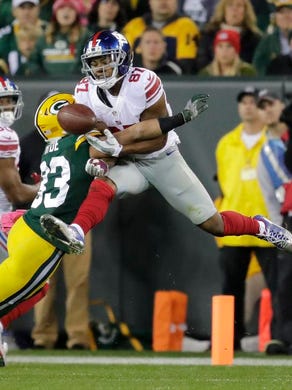 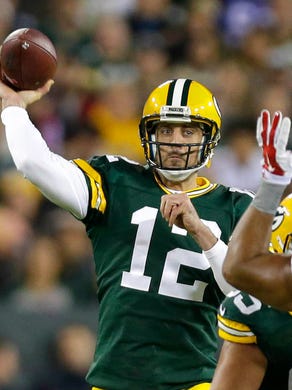 Green Bay Packers wide receiver Jordy Nelson (87) has a pass go off his hands which was then intercepted against the New York Giants at Lambeau Field. Jim Matthews/USA TODAY NETWORK-Wis
Fullscreen 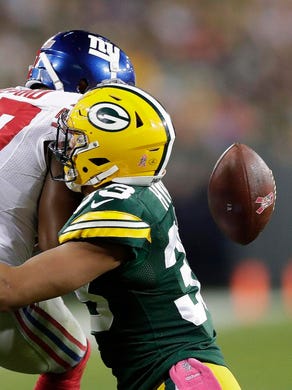 Kyle Albulushi, of Jackson, Wis., looks like and pretends to throw like Aaron Rodgers before the game against the New York Giants. Rick Wood, Milwaukee Journal Sentinel
Fullscreen

NFL post-game signs for drug testing are shown in a men's restroom outside the visitor's locker room before the Green Bay Packers game against the New York Giants on Sunday at Lambeau Field. Mark Hoffman, Milwaukee Journal Sentinel
Fullscreen

Clearly, the Packers were set on using Starks as their two-minute back, and about the only thing that shows is that they don’t have a third-down back. At least as a receiver, Starks’ hands don’t seem any better than Lacy’s, and he’s not as good a runner after the catch.

So it must come down to pass protection, and Lacy presumably hasn’t been good enough in that area to win the third-down job. But McCarthy might need to revisit that, because the Packers’ playmaking has been pedestrian enough as it is. No need to make it worse by taking his bulldozing halfback off the field on such important times — that is, third downs and the two-minute drill.

In fact, while this no doubt is a passing league and the Packers are a passing team with Rodgers at quarterback, McCarthy just might end up having to build a good chunk of his offense around Lacy. For the past few years, McCarthy has wanted a faster pace to the game and more plays, but he might not have the offensive talent to justify playing that way.

McCarthy did play third-year receiver Jeff Janis some in his first game since getting the cast off his broken hand. The hope no doubt was that Janis’ 4.42-second 40 speed could add a little something to the offense. But the Packers took only one deep shot all game, and for some reason on that play both Janis and Nelson were running down the hash marks, which brought two defenders into the play, and they broke it up.

McCarthy also mixed up his personnel a fair amount, especially in the first half, and it sure looks like he’ll need more of that as the season goes on. His standard set with three receivers (Nelson, Randall Cobb and Davante Adams), one tight end (Richard Rodgers) and a running back just doesn’t deliver, especially when it has to stay on the field in the two-minute.

Adams, for instance, had solid numbers (five catches, 85 yards, one touchdown), but his 29-yard touchdown came against one-on-one coverage by the Giants’ No. 5 cornerback, undrafted rookie Michael Hunter. And while Richard Rodgers has good hands, his limitations as a receiver were all the more obvious with Jared Cook missing the game because of an ankle injury.

The Packers have to feel good that they were able to win another game while trying to figure out who they are on offense. And we’ll see as the season goes on whether some playmakers emerge as the coach and quarterback find out what works and what doesn’t. But it also might be the case that this is kind of a plodding offense by NFL standards, and that McCarthy will have to put more on Lacy than he imagined going into the season.