Dougherty: Get used to dink-and-dunk Packers

McCarthy, Rodgers go to spread passing game that could be the way team has to play in '16

Dougherty: Get used to dink-and-dunk Packers

Pete Dougherty and Bob McGinn take a look at the Packers' 26-10 win over the Bears and explain what it means for the team going forward. (Oct. 20, 2016)

GREEN BAY - For better or worse, this is who the Green Bay Packers will have to be in 2016.

Spread the field, throw the ball short and then throw it short some more. The West Coast offense on steroids.

It wasn’t pretty, it wasn’t smooth, and it wasn’t like anything we’ve seen before in the Aaron Rodgers era. But it worked Thursday in the Packers’ 26-10 win over the beleaguered Chicago Bears at Lambeau Field. And all things considered, it figures to be the way the Packers will have to play from here on out if they’re going to have a chance to have a big 2016.

“You play the way you have to play,” coach Mike McCarthy said afterward.

INSIDER: Thumbs up to Davante Adams

Coming into Thursday night, it was hard to see this as a big-picture game. The Packers were coming off an anemic loss to the Dallas Cowboys last week and nothing but questions about what’s been wrong with Rodgers and coach Mike McCarthy’s offense for the last year. They were missing their top three cornerbacks and the only two halfbacks that were on the roster last week. And playing on Thursday night, they had a short week to recoup and practice after the Cowboys debacle..

This was a game to simply survive and find some way, any way to win against a Bears team that was short-handed, too. Then regroup over the long weekend.

But as the night went on, McCarthy, mostly by necessity, kept trotting out four- and five-receiver personnel groups, and eventually, it seemed to wear down a Bears defense that came into this game ranked No. 11 in the NFL in yards allowed and No. 19 in points.

With all of Rodgers' struggles and the lack of big-play weapons in the passing game, it was hard not to come away from this game thinking this is how the Packers will be playing for a while and maybe the rest of the year.

They simply don't have the manpower at running back to do it any other way. Eddie Lacy (ankle) is on injured reserve and can’t return for at least eight weeks. James Starks (knee) is expected to miss a few weeks more. And then Don Jackson, promoted from the practice squad earlier in the day, injured his hand in the second quarter and didn’t return.

RELATED: How they scored

So Knile Davis, acquired in a trade this week, and fullback Aaron Ripkowski were the only healthy running backs in the second half. Ty Montgomery and Randall Cobb ended up shouldering most of the running game (14 carries combined), though that appeared to be the plan anyway.

Rodgers attempted 56 passes on 79 offensive snaps. He completed a career-high 39.

Three receivers caught at least 10 passes: Davante Adams (13, which is one short of Don Hutson’s team record), Cobb (11) and Montgomery (10).

But no one is going to mistake this for one of the NFL’s all-time explosions. Collectively those three averaged 8.6 yards a catch. This was death by 1,000 cuts. Or maybe 10,000.

Green Bay and Chicago fans show their support for their teams during a recent Packers-Bears game. Mike De Sisti
Fullscreen

Packers wide receiver Ty Montgomery had a big game Thursday against the Bears with 66 receiving yards in addition to 60 on the ground. Mike De Sisti / Milwaukee Journal Sentinel
Fullscreen

Green Bay Packers defensive back Marwin Evans (25) celebrates making a tackle on a kick off in the fourth quarter against the Chicago Bears at Lambeau Field. Dan Powers/USA TODAY NETWORK-Wis
Fullscreen

Brian Hoyer is tackled by Green Bay Packers outside linebacker Julius Peppers (56) and the Bears quarterback is injured and taken out of the game. Mike De Sisti, Milwaukee Journal Sentinel
Fullscreen 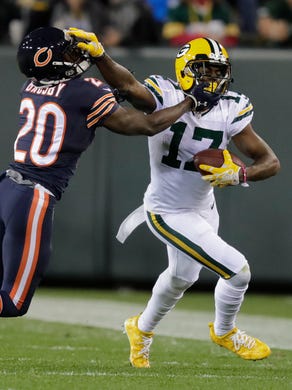 Chicago Bears inside linebacker Jerrell Freeman (50) and outside linebacker Willie Young (97) celebrate a goal line stand on fourth down during the first quarter against the Green Bay Packers at Lambeau Field. Dan Powers/USA TODAY NETWORK-Wis
Fullscreen

Ken Nix, right, of Wild Rose has fun tailgating with his son Payton Nix prior to the start of the game. Dan Powers/USA TODAY NETWORK-Wisconsin
Fullscreen

Merel and Jordi Baggen pose with the Lambeau Leap statue before the Green Bay Packers game against the Chicago Bears. The couple left their four children at home in Netherlands to attend the game. Mark Hoffman, Milwaukee Journal Sentinel
Fullscreen

Christian Zebrasky lifts the lid of his grill as smoke billows out while tailgating with family. Mike De Sisti, Milwaukee Journal Sentinel
Fullscreen

Doreen House, left, and her daughter-in-law Sammy Spruce from Green Bay sit in a wagon with their dog, Bentley, a seven-week-old Shih Tzu dog. They we planning on not going into the game and taking the dog home. Mike De Sisti, Milwaukee Journal Sentinel
Fullscreen

“This is how we’re going to have to play for a little bit until we get Knile up to speed and Don (Jackson) up to speed,” Rodgers said. “I thought (Montgomery) played great tonight, made a lot of plays. The short passing game was like an extension of the run game in games like tonight when you’re going with a lot of four-receiver packages with Ty back there (at running back).”

So McCarthy kept shuttling his receivers in and out of the lineup, and as the game went on, you had to wonder: Can a spread passing game wear down a defense just like a run game? McCarthy played Jordy Nelson most of this game and liberally rotated the rest of his receiving corps at three other spots (Adams, Cobb, Montgomery, Jeff Janis and Trevor Davis, though Davis played by far the fewest snaps), often with a tight end taking up the fifth skill position..

Play after play, they were running routes, and the Bears’ secondary had to cover each and every one. And their defensive line had to rush down after down as well.

By the fourth quarter, the Packers were moving the ball up and down the field, especially after they went no-huddle. Granted, it’s a lot tougher envisioning how this will work against the Minnesota Vikings. And this game got much easier when the Bears’ No. 3 quarterback, Matt Barkley took over for injured Brian Hoyer (forearm) in the second quarter.

But compared to how the Packers had been playing, this radical change in offensive approach worked fairly well. It wouldn’t hurt if tight end Jared Cook returns in the next couple weeks, either. That would offer a big, athletic target the Packers lack now.

But for now, you can expect to see more of the same.