Cody Heiman is trying to become a rarity: An NFL player who played eight-man football his entire high school career.

PackersNews.com's Aaron Nagler and Pete Dougherty discuss what to expect when the Packers take the practice field in front of the public and media on Tuesday. 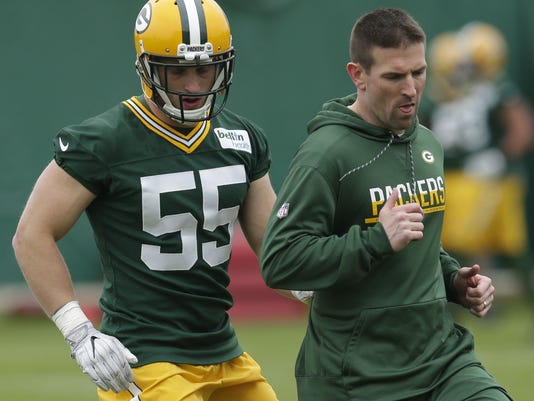 Cody Heiman is trying to become a rarity: an NFL player who played eight-man football his entire high school career.

How uncommon would it be if this undrafted inside linebacker who played at Baileyville B&B High School and Washburn University, both in Kansas, makes the Green Bay Packers’ final 53 this year?

Well, I can’t swear to this, because nobody keeps reliable track of these things. But it appears to be, well, awfully rare.

An hour or so of research this week revealed that Heiman appears to be one of two players currently on an NFL 90-man roster who played six-man, eight-man or nine-man football in high school. The other is Karter Schult, a defensive end from Northern Iowa who signed with Cleveland as an undrafted rookie this offseason.

I found two reduced-player high schoolers on 53-man rosters last season: Chad Greenway (nine man in South Dakota) and Chase Reynolds (eight man in Montana). But Greenway retired from the Minnesota Vikings this offseason after a 10-year NFL career, and Reynolds remains unsigned after playing running back for the Rams the last five seasons.

So what are Heiman’s chances? Well, he didn’t dominate enough at the Division II level to convince a team to invest a late-round draft pick in him, so he’s an underdog. But based on his physical testing at his pro day in the spring, it’s hard to dismiss his chances. More on that later.

One of the first things I wondered was how much playing eight man while growing up affects his NFL prospects. The game is played on a smaller field (80 yards between the goal lines and 40 yards between the sidelines, instead of the traditional 100 by 53 1/3) but it’s more wide open because there are six fewer players. That made for a tough adjustment to the more crowded field and 11-man schemes in college, even at the Division II level.

RELATED: Evolution of Packers' inside linebackers

RELATED: Randall still believes the sky is the limit

“It was very difficult the first year to year and a half,” Heiman said, “because I hadn’t been around, hadn’t heard all the terms. It was all man-to-man (coverage) in eight man.”

But Russ Riederer, whose 14-year career as an NFL strength coach included the 1990 season with the Packers, wonders if playing eight-man football might have been good training for an inside linebacker because of the way today’s game is played. Riederer watched Heiman regularly because his son Jake was a teammate at Washburn.

“You’re covering a lot of area because there are less players,” Riederer said. “To me that’s what the game of football is evolving into. You better be an athlete playing in space. I’m not so sure that actually hurt him.”

There were 1,561 high schools playing reduced-player football in the United States in 2015, according to MaxPreps Football. That included 1,161 in 30 states that sponsor eight man. According to the WIAA website, 22 schools played eight man in Wisconsin last year.

It’s a higher-scoring game, but Heiman said the pass-run ratio was similar to 11-on-11. Some teams threw a lot, others ran a lot, and some, like his school, had an even split.

Heiman played linebacker and running back.

The biggest difference is, “if you miss a tackle they’re gone,” Heiman said. “You’re usually manned up so you don’t have much help. It’s a lot more of a match-up defense.”

Eight-man players have trouble getting recruited, and Heiman didn’t get any feelers from a Division I school. But he was a four-sport athlete who stood out on Baileyville B&B eight-man teams that went to four straight state title games (and won two), and was a state high jump champion with a personal best of 6-foot-8.

His only scholarship offers were in Division II, so he went to Washburn in Topeka. Washburn coach Craig Schurig had put five players into the NFL, and when he recruited Heiman he thought he might have another.

Heiman’s pro day in the spring suggests he at least has a fighting chance. He checked in at 6-1 3/8 and 229 pounds, though this week he said he’s now at his playing weight in college, between 235 and 240 pounds. And his workout showed he’s a good athlete for his position.

Those results suggest Heiman is a little more explosive an athlete than the Packers’ top three returning inside linebackers, Jake Ryan, Blake Martinez and Joe Thomas. Here’s how their tests compare, with Heiman in parenthesis, followed by Ryan, Martinez and Thomas:

Now, test results only tell you so much. They say nothing about the intangibles and play speed. Ryan (Michigan) and Martinez (Stanford) stood out at much higher levels of college football, and Thomas has played in 30 games in two seasons with the Packers.

The Packers also are planning on playing a safety (Morgan Burnett or Josh Jones) a lot more at inside linebacker to improve the athleticism at that position, and Heiman is not in their class athletically.

It’s also worth noting that in the three OTA practices open to media this offseason, Heiman has done nothing to distinguish himself. Take that for what it’s worth. Offseason practices in shorts and helmets don’t mean much. What matters is when the pads come on in training camp.

“Those test numbers, you know where they better show up? Special teams,” Riederer said. “Being able to run and change direction and be explosive … They’ve got to see that first.”

Heiman signed with the Packers after the draft because he liked their history of keeping undrafted rookies, and they were the only team to work him out individually on campus. His best shot might be making the practice squad this year.

He averaged 4.7 yards a carry as a running back as a redshirt freshman at Washburn before moving back to inside linebacker full time, and several NFL teams were looking at him as a fullback. So he could take scout-team reps on either side of the ball.

And even a spot on the practice squad would get him one step closer to joining the NFL’s relatively exclusive eight-man high school club. When told how few reduced-player high schoolers were in the NFL last year, he laughed reflexively.

“I know when you come from eight man you don’t have near as good a chance,” he said. “So I’m just blessed to get this opportunity. But I think it’s kind of cool to have the background I do.”

The Packers brought in one undrafted free-agent cornerback Wednesday and released another.

Green Bay announced the signing of Daquan Holmes, a 5-11, 187-pound cornerback out of American International who participated in rookie orientation on a tryout basis in May. They cut cornerback David Rivers, who was waived injured after not being able to practice during OTAs because of injury.