Dougherty: No Dorsey, few clues on next Packers GM

Scratch John Dorsey from the list of Ted Thompson’s potential successors. As for when the Packers will look for their next GM, that’s anyone’s guess.

Dougherty: No Dorsey, few clues on next Packers GM 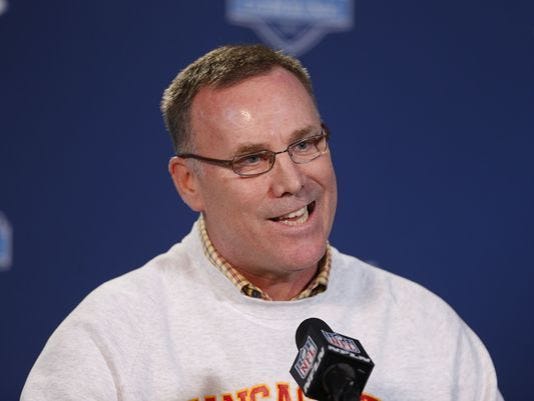 As for when the Packers will be searching for their next GM, that’s anyone’s guess. Mark Murphy, their CEO, has made clear he wants Thompson steering the Packers’ ship for as long as the GM is in good health and wants the job. Thompson, for his part, gives no inkling that retirement is imminent.

But Thompson also is the second-oldest GM in the NFL – he turns 65 in January. He’s already in his 13th season in an all-consuming job that can wear out even the most football obsessed. So the smart money says that sooner rather than later, the Packers will be hiring their next GM.

But Dorsey, 57, would have warranted serious consideration as well. Besides being a Ron Wolf protégé with a long history in the Packers’ organization, he played a major role in turning around a Kansas City Chiefs team that won only two games the season before he arrived. In Dorsey’s four years as GM, the Chiefs averaged 11 wins before his stunning firing, which is still mostly unexplained, last summer by owner Clark Hunt.

Dorsey now is off the market and probably will be for a while, if not the rest of his career.

Yes, Jimmy Haslem, the Browns’ beleaguered owner, has a history of plowing through GMs – Dorsey is the fourth he has hired in six years owning the team.

But Dorsey’s success in Kansas City (and pay through next offseason) gave him leverage on a desperate owner, so you have to think he signed a long and lucrative contract. He has a glut of high draft picks that the previous regime accumulated to build the team. And even though he and coach Hue Jackson reportedly both report to Haslem, it’s hard to believe Dorsey would have taken the job if he couldn’t fire the coach.

I’m guessing Dorsey will be there a while.

How much longer Thompson’s tenure lasts is anyone’s guess. He keeps close counsel, so few if any know how long he plans to stay on the job. Murphy clearly wants him, regardless of fan sentiment.

This offseason Thompson will be down to the final year of his contract, and it’s highly unlikely Murphy will leave him a lame duck unless Thompson has told him this will in fact be his last year. So don’t be surprised if Murphy signs his GM to an extension this offseason, and then Thompson extends coach Mike McCarthy’s contract as well. McCarthy’s deal also is believed to run through next year.

That won’t go over well with the growing segment of Packers fans who think it’s time for a change at the top. But Thompson is Murphy’s call as long as the team’s seven-member executive committee keeps Murphy in charge.

“I’m still in the camp that I wouldn’t be surprised if (Thompson) stayed on after (’18),” said an NFL source who knows Thompson well and has observed the Packers closely for years. “There’s nothing else he likes to do. … And I don’t see Murphy wanting to make any big changes.”

As for Thompson’s successor when the time comes, I’ve already weighed in on what I’d do, especially with Dorsey out of the picture. Murphy should promote whichever in-house scout he thinks will be the best GM: Wolf, Highsmith or Gutekunst.

Ball’s far-reaching hand in the organization strongly suggests he’ll be high on Murphy’s GM list as well. Ball has become a highly influential member of the organization as vice president of football administration/finance with a voice in almost all football operations.

Retaining him for the long haul as contract negotiator and all-topic adviser should be a priority. But if it’s my call, the GM always would be a scout whose life’s work has been evaluating players. Because players are the lifeblood of the team.

I’ve heard from fans who question why Wolf, Highsmith or Gutekunst should be the next GM, since they’ve been key advisers in decision-making that has failed to improve a defense that has ranked in the bottom third of the NFL for most of the last seven years. The skeptics point to the departures of Dorsey, John Schneider and Reggie McKenzie for GM jobs as the reason for those failures.

I’d start by pointing out that the final call on draft picks and signings are Thompson’s. He’s been the decider from Day 1.

Thompson might be the only person who knows how much influence his subordinates have on his decisions. But I keep thinking back to when the Packers hired Thompson in 2005. One source wondered how well Thompson would do without his most trusted adviser, Scot McCloughan, who’d left the Seattle Seahawks just a few days before Thompson to become the San Francisco 49ers’ vice president of player personnel.

McCloughan, in fact, is a first-rate evaluator, and Thompson badly wanted to take him to Green Bay. Yet Thompson’s first few drafts with the Packers were outstanding.

Also, Dorsey and/or McKenzie were on staff for some of Thompson’s biggest draft misses -- Derek Sherrod (first round in 2011), Jerel Worthy (second round 2012), and Datone Jones (first round 2013).

The fact is, every GM from the Wolf scouting tree – that also includes Thompson and McCloughan – has won. Ron Wolf hired Highsmith and Gutekunst, and of course is Eliot Wolf’s father. Why break that tree now for somebody else’s unproven guy?

The question is, how many of them will be available by the time the Packers are looking for Thompson’s successor?

The league has one other GM job open, the New York Giants’. There’s good reason to think at least one and possibly all three of Thompson’s top advisers could become candidates.

Former Giants GM Ernie Accorsi is leading the search, and when he consulted for the Detroit Lions GM hiring two years ago the Lions requested an interview with Eliot Wolf. Thompson denied it, as he’s allowed under NFL rules because the Packers’ season wasn’t finished at the time.

One source said Accorsi also was calling around the league soliciting opinions on Highsmith at that time, so he could be on the Giants’ radar. And Gutekunst interviewed for two GM jobs last year--Buffalo and San Francisco--so he already has been identified as an up-and-comer as well.

For what it’s worth, earlier this week the New York Daily News speculated on the top five candidates for the Giants’ job, and Wolf was among them, along with Dorsey, former Carolina GM Dave Gettleman, Dallas Cowboys assistant personnel director Will McClay and Baltimore Ravens assistant GM Eric DeCosta.

Meanwhile, the great mystery with Dorsey is why he was available in the first place. One week last summer he reportedly was negotiating a contract extension with the Chiefs, the next week he was gone.

Of all the explanations I’ve heard from sources around the league, the most plausible is that Dorsey’s informal management style and confrontational personality clashed with the team’s button-down president Mark Donovan, who’s a former executive in the NFL’s office.

But there’s also the matter of coach Andy Reid, who helped hire Dorsey. Reid undoubtedly could have blocked the firing, so at minimum he tacitly approved. The new GM, Brett Veach, entered the NFL as Reid’s administrative assistant with the Philadelphia Eagles in 2007. So Reid in effect is undisputed head of the Chiefs’ football operations now.

It’s quite the coincidence that Dorsey’s first game with the Browns is against the Packers on Sunday. He grew up in the Packers organization as a player and scout, lived most of his adult life in Green Bay, and would have been a great choice for GM. Instead, his future will be all about rebuilding the NFL’s worst team.