Dougherty: Steep price for Packers to move up

In the last 13 NFL drafts, the Packers have picked in the first half of the first round only three times. Brian Gutekunst will have the 14th pick.

Dougherty: Steep price for Packers to move up 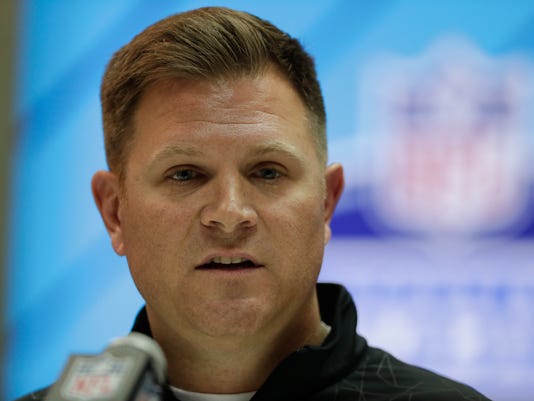 In the last 13 NFL drafts, the Green Bay Packers have picked in the first half of the first round only three times.

That’s a good starting point for thinking about how general manager Brian Gutekunst should handle his top selection, No. 14 overall, this year.

We’re still seven weeks from the draft, so there’s a lot more information and misinformation to sift through to make a decent guess on who will be available when No. 14 comes up. All possibilities — trading up, picking at 14 and trading back — have to be in play at this point.

But as long as Aaron Rodgers is quarterback, the Packers won’t get many chances to pick this high. So just as a general approach, they should be inclined to pick at 14 or move up, not back.

Of course, nothing is close to guaranteed. High picks, even top five picks, bust all the time in the NFL. But the higher up you go in the first round, the better the odds of finding a difference maker, or at least a good player.

Just look at some of the players in the last 10 drafts selected near where the Packers are picking.

The NFL’s best defensive tackle was taken at No. 13 overall (Aaron Donald in 2014), as were two other talented players at that position (Sheldon Richardson in ’13 and Nick Fairley in ’11), and two decent outside rushers (Brandon Graham in ’10 and Brian Orakpo in ’09).

RELATED: Abundance of picks give Packers flexibility in draft

The list at No. 14 includes two stud defensive backs (Darrelle Revis in ’07 and Earl Thomas in ’10), as well as several good players (Robert Quinn in ‘11, Malcolm Jenkins in ’09, Michael Brockers in ’12, Star Lotulelei in ’13, Kyle Fuller in ’14 and promising Derek Barnett last year).

While backpedaling sounds good in theory — who couldn’t use an extra pick in the second or third round? — Gutekunst will need a very good reason to move back more than a spot or two. The Packers might not pick this high again until Rodgers retires.

As for moving up, it’s not cheap, and even if Gutekunst is active in free agency, he needs to re-stock his roster with young talent, too. He has 12 picks to work with, though none of the extras is above a fourth-rounder.

There’s plenty of wiggle room in draft-day trades, but here’s the gist of the cost of moving up, going by the old Jimmy Johnson trade chart and recent draft history: For the cost of a fourth-rounder the Packers probably can move up two spots; for a third-rounder, they can get just into the top 10; and for a second-rounder, they probably can get just outside the top five.

Dallas was the last team to trade up from No. 14. In 2012, the Cowboys gave up a second rounder (No. 45 overall) to move up to No. 6. The Packers’ second-rounder is also No. 45. That gives you an idea. Then again, Tennessee had to spend a third-rounder and a future second-rounder to move from No. 15 to No. 8 in 2016. So it depends on finding a trade partner. The jockeying for the top four quarterbacks also could drive up the price to draft that high.

As for getting into the top five, it almost surely will cost a future first-rounder.

We don’t know the Packers’ draft grades, but I’d guess the only player they might consider trading into the top 10 for would be outside rusher Bradley Chubb of North Carolina State. If they like him a lot, it very well might be worth spending their second-rounder to get him. But that’s assuming Chubb makes it to No. 5 or 6.

Indianapolis looks like a great candidate to take him at No. 3. The only way he’d be worth trading up that far, at the cost of a future first-rounder, is if he’s a future Hall of Famer. Gutekunst would have to have an uncommonly strong conviction to make that kind of move. Seems unlikely.

RELATED: Derwin James could be versatile chess piece for Packers

Besides pass rusher, Gutekunst also has big needs at cornerback, tight end and receiver, with guard and tackle not far behind. Free agency might, or really should, make at least a couple of those needs less acute. Signing a starting or slot cornerback would give some breathing room at that position to draft a developmental player later. Same for tight end, a position where it's hard for even a first-rounder to contribute a lot as a rookie anyway.

We have no history on the Packers’ new GM, so we don’t know if he’ll be a wheeler-dealer. At the NFL scouting combine, he talked of favoring more bites at the apple, but he also suggested he’s open to maneuvering all over the board, and with 12 picks he has some flexibility.

“Whether that stays at 12 or we go down or up, the more you have, the more ability you have to move to areas of the draft you think are strong,” he said.

Here’s an early, abbreviated list of prospects who might be in play for the Packers in the first round:

» Tremaine Edmunds, Virginia Tech: Talented linebacker who also might be able to rush the passer, so could be the kind of versatile defender new defensive coordinator Mike Pettine is seeking. Probably won’t make it to No. 14 but might get close.

» Derwin James, Florida State: A safety by trade but if the Packers think he can play slot cornerback, he’d have to be attractive to them. Probably won’t make it to No. 14 but might get close.

» Vita Vea, Washington: Huge (347 pounds) interior defensive lineman, might not make it to No. 14. Question is whether he rushes the passer well enough to justify the Packers' picking him this high.

» Marcus Davenport, Texas at San Antonio: Raw but probably the second-best pass-rushing prospect in the draft, behind Chubb. Decent chance he’ll be available at No. 14.

» Mike Hughes, Central Florida: Cornerback is only 5-10⅛, so if Gutekunst stays with Packers’ traditional 5-10½ minimum height for CBs, Hughes won’t be considered.

» Calvin Ridley, Alabama: Probably the most highly regarded receiver prospect in a weak draft at that position, has slight build (190 pounds) and it's not a given he’ll go in the first half of the first round.