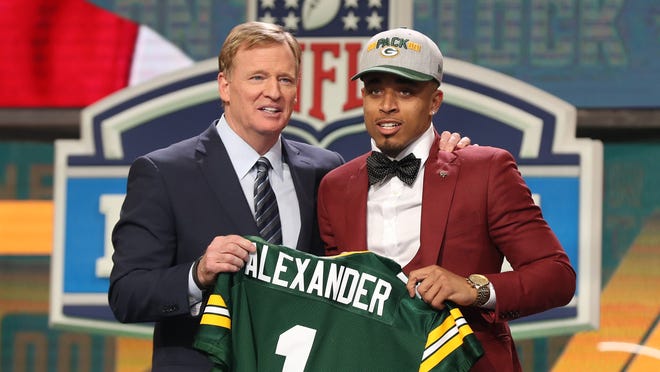 It might not have jumped out at you watching the Super Bowl, but in a game that saw Philadelphia and New England combine for a stunning 874 passing yards, it was there.

Receivers, especially for the Eagles, routinely running across the middle of the field and picking up extra yards after extending for passes that weren’t quite on target. Players snagging nearly every throw within reach along the sidelines.

In a league where you have to throw to win, there’s a real advantage to having receivers who can catch throws that aren’t on the money, and better yet to catch them comfortably enough that they can pick up yards after those catches.

Enter the Green Bay Packers, who appear to be trying to build the tallest receiving corps in NFL history with exactly that in mind.

RELATED:Packers at the head of the class in NFL draft grades

After they selected three tall receivers on the draft’s final day in fourth-rounder J’Mon Moore (6-feet-2⅞), fifth-rounder Marquez Valdes-Scantling (6-4) and sixth-rounder Equanimeous St. Brown (6-4¾), the Packers now have six receivers on their roster who stand 6-feet-2⅞ or taller.

Joining the three draft picks are Geronimo Allison (6-3¼), Michael Clark (6-5⅝) and Jake Kumerow (6-4½). (All heights are based on measurements at the NFL scouting combine, or if the player didn’t attend, from NFLDraftScout.com reports of their pro days.)

All this size is no coincidence.

Not to say that general manager Brian Gutekunst and McCarthy won’t abide shorter receivers. Their best one, Davante Adams, is of average height for his position at 6-0⅞, and their starting slot man, Randall Cobb, is only 5-10⅛. But acquiring so many receivers who possess this distinguishing trait doesn’t happen by accident.

Now’s probably the time to point out that these players are only on the Packers’ 90-man roster, not the 53. But if you had to bet now, you’d probably wager Allison, Clark and at least one of the rookies will make the final 53, and it wouldn’t be a shock if two or maybe even all three draft picks were on the final roster. Much will depend on how the rookies play on special teams.

Only Kumerow is a long-shot.

Regardless, let’s put the height and length of these guys in perspective.

According to MockDraftable.com, the average height of a receiver at the scouting combine going back to 1999 is 6-0⅞, which Adams hits on the nose. The average wingspan is 76⅜ inches, which Adams (77¾ inches) tops by a little more than an inch.

Now let’s compare the others’ height and reach:

Allison is 2⅜ inches taller than average, and his wingspan (79¾ inches) is 3⅜ inches wider.

Clark is 4¾ inches taller than average, and though his wingspan wasn’t available (he didn’t attend the combine), his 32⅞-inch arms are an inch longer than average.

And Kumerow is 3⅝ inches taller than average, and his arms (31⅞-inches) are right on the average (no wingspan available).

There are advantages to being smaller and quicker, as well, starting with the ability to get open. We also have to remember that none of the three drafted receivers was a top-100 pick. They have their warts.

But what stands out about the draft picks, or at least Valdes-Scantling and St. Brown, is that they can run, too. The Packers’ problem at receiver last year wasn’t size. It was speed.

A scout for an NFC team who observed Valdes-Scantling during his week at the NFLPA Collegiate Bowl rated him an orange player — that is, a backup with the skill set to develop into a low red (starter or heavy contributor).​​​​​​​

St. Brown, who played at Notre Dame, ran 4.48, which is excellent for a receiver his size and in the 65th percentile since ’99. Clark ran 4.53 last year coming out of Marshall, but that was at his pro day, which isn’t in the same conditions and surface as those who are at the combine. It’s safe to say Valdes-Scantling and St. Brown are faster.

A scout from another team said it was obvious the Packers were looking for “tall, fast playmakers” in this draft class.

Of course, there’s a lot more to being a good NFL receiver than being tall, fast or even both.

The odds still have to favor Allison becoming the Packers’ No. 3 receiver this season, even though he’s the slowest of the bunch (4.67 40), because he has already established a decent chemistry with Rodgers. Clark has a leg up on the rookies, too, after being promoted from the practice squad to the regular roster for the final five games last season and getting 75 snaps with the offense.

Trevor Davis, on the other hand, is in for the fight of his football life to make the team as a third-year pro. Maybe his ability as a returner will save him, but his battle is uphill.

Regardless, when you draft three guys at one position on the final day, you’re realistically looking for one to pan out. Two, and the Packers will have a big win and a giant receiving corps.

Aaron Rodgers has to be intrigued by that.