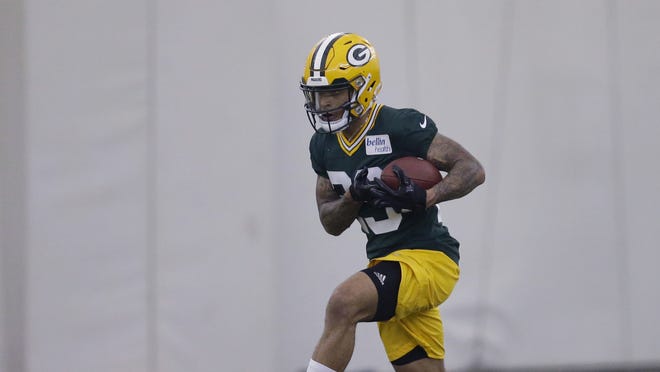 Maybe the most telling fact about the Green Bay Packers’ brutal history of drafting punters is that they went 13 years without selecting one after the B.J. Sander fiasco.

You might remember Sander, who is one of the more notorious draft picks in team history. In 2004, coach Mike Sherman made the stunning decision to trade up to select a punter in the third round. Sander played in only 14 games for the Packers and in the NFL.

General manager Brian Gutekunst finally ended the franchise’s punter-less draft streak this year by selecting Alabama’s JK Scott in the fifth round. The 13 drafts without taking a punter speak to the difficulty of identifying an NFL punter while he’s still in college, and the availability of punters off the street who are at least good enough.

But then Gutekunst and coach Mike McCarthy went all-in on Scott after the first practice of rookie orientation camp last week by cutting their punter from last season, Justin Vogel. Vogel wasn't out of work for long, being claimed on waivers Monday by the Cleveland Browns.

At the risk of handing the job to a rookie, Gutekunst and McCarthy decided that a spot on the 90-man roster was more valuable for an undrafted rookie who plays a regular position than a punter to compete with Scott.

“There’s a very high level of trust of every young man that’s been brought in here,” McCarthy said of the move. “… Competition is a great motivator. It brings the cream to the top. I get that. But sometimes you have to commit and develop from within, and we’ll get the results that we need.”

The Packers undoubtedly think Scott has been steeled for the NFL after punting in three NCAA championship games and three other playoff games for the pre-eminent program in the country, Alabama. Those are the brightest lights you can get short of the NFL. They also presumably like his temperament.

“Playing in those big games has given me a realization that nothing changes for me,” Scott said at the Packers’ rookie minicamp last weekend. “Honestly, playing in the national championship, the way I was experiencing it, it was fun.”

Though Scott grew up a Packers fan in Denver — his father, Kim, attended Madison West High School and was a decorated pole vaulter at the University of Wisconsin in the 1970s — he doesn’t know the franchise’s dreary history of drafting punters. And it shouldn’t matter to him, because each pick has to stand or fall on his own.

Really, the Packers’ dismal punter drafting is as much as anything a reflection of the franchise’s overall futility between the Vince Lombardi era and the rebirth of the franchise since 1992.

Of the 11 punting specialists the Packers have drafted, nine came in those lost years. Seven of them never punted for the team and the other two didn’t come close to panning out.

The first year they drafted a punting specialist was 1979, when they incredibly picked two (Rick Partridge in the eighth round and Bill Moats in the 12th). Neither made the final roster.

In 1981, they selected Ray Stachowicz with a third-round pick, and he was a disaster on Sander’s level except for the important difference that at least the Packers didn’t trade up to get him. Stachowicz lasted all of two seasons with the team.

The Packers, in fact, have drafted only one punter who had a decent or better career: Josh Bidwell, a fourth-round pick in 1999. He missed his rookie season because of treatment for testicular cancer and then punted for the Packers for four seasons before they let him walk in free agency. He ended up playing 10 years in the league.

Of the other 10 drafted punters, seven never suited up in a game for the Packers, and the other three combined for only 71 games for the franchise. None lasted more than two seasons with the organization.

Now it’s Scott’s turn. Gutekunst said he picked Scott because he considered him a “rare” prospect for the position. Some of that evaluation surely is based on Scott’s build. NFL teams covet tall punters with legs that operate as long levers. Scott is 6-foot-5⅝.

“I’m definitely very blessed just with my body, the way that I’m made,” he said. “I have long legs and I’m pretty flexible, that helps me get a lot of leverage on the ball.

Scott’s family history in athletics has favored him not only genetically but also in training.

His father was the first Wisconsin high schooler to top 16 feet in the in the pole vault, at one point was tied for the national high school indoor record and won the WIAA state meet as a senior in 1973. He went on to become a two-time All-American pole vaulter at Wisconsin.

Kim Scott oversaw all his children’s training starting in youth sports — JK has an older sister, Christi, who was a heptathlete at Harvard, and younger brother Charlie, who now is the punter at Air Force. JK’s and Charlie’s Scott’s primary sport for much of their youths in Denver was soccer — both were midfielders.

Kim Scott had seen many young soccer players burn out from specialization and never-ending travel-team seasons, so he emphasized cross training. That included taking JK and Charlie to a local football field to kick footballs. JK ended up liking it so much that when he went to high school he decided to punt and kick in football rather than play soccer. Charlie did the same.

Over the years, the three have honed a workout program for punting that emphasizes quick-twitch muscles and flexibility. It includes extensive work with Pilates, swimming, water running and hurdling.

Besides having his own track experience to draw on, Kim Scott also regularly consults friends from his time at UW who are coaching in the sport around the country. The result is the program his sons use now. At Alabama, coach Nick Saban saw the results and allowed JK Scott to do his own workout regimen rather than one designed by the team.

Scott said the Packers also appear accommodating, based on his brief initial talks with their strength and conditioning coaches.

“Just from what they’ve told me, they want the best for me,” he said. “Whatever the best exercises are for me and my schedule, they’re going to have me do it. I’m sure there’s going to be collaboration on that.”

Scott didn’t have any inkling the Packers were interested in drafting him — they were not among the 10 to 12 teams that worked him out in Alabama before the draft. But he was a bona fide Packers fan growing up because of his father’s deep ties to the state.

That includes JK ‘s yearly summer trips since early childhood to the family’s cabin on Lake Owen in northwestern Wisconsin. JK’s grandfather, John Kimball Scott I, grew to love the Cable, Wis., area after multiple ski trips to nearby Telemark Lodge, so he built the cabin in 1964. It remains in the family today.

When JK was growing up in Denver, his family spent much of its summers at the cabin.  Kim Scott is a real estate developer and can work out of an office at the cabin and fly out of Minneapolis as needed, and still spends much of the spring and summer there.

JK Scott has visited there as recently as last summer and is planning to again in late June or July — it’s about a four-hour drive from Green Bay. The cabin has a weight room, and JK and his brother can drive to Northwestern High School in Maple to punt on the artificial football turf there.

Then after that working vacation, he’ll return to Green Bay for his first NFL training camp, where there will be plenty of scrutiny as he tries to begin proving the Packers finally got it right when they drafted a punter.