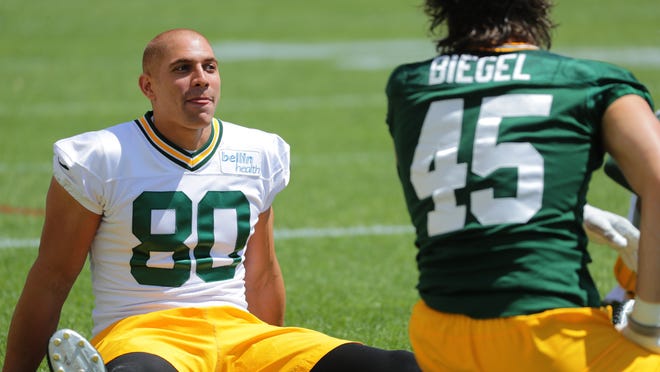 This is a story in which elite-level sports meet the cutting edge of science, for better or worse.

It’s neither an endorsement of anyone or anything, nor a cautionary tale. It’s simply a sign of the no-man’s land we’re in right now in the young science of biologics, and one NFL player’s decision to try an intriguing but unproven treatment to help extend his career.

The player is Jimmy Graham, the five-time Pro Bowl tight end the Green Bay Packers signed in free agency this offseason. The science is in the promising but controversial field of stem cells, though the treatment Graham tried more specifically used an offshoot of stem cells, that is, extracellular vesicles (or EVs). More on that later.

The story starts with the torn patellar tendon Graham sustained in his right knee in November 2015, less than a week after he’d turned 29 and while with the Seattle Seahawks. A ruptured patellar tendon can be career-threatening and requires surgery and a long rehabilitation. Graham recovered well enough to return to the field nine months later, but says he played the 2016 season with significant, chronic pain in his knee.

No news outlet has reported the EV treatment Graham tried next to enhance his recovery, though Graham has shared his story in one public format, an 8-minute testimonial video for the clinic (Wellbeing International Foundation) that treated him.

Graham turned down multiple requests for an interview during the Packers’ recent OTA practices, but following is a distillation of what he says in the video.

Faced with the prospect of knee surgery to address the pain after the 2016 season, Graham explored nonsurgical stem cell-based options. They haven’t been approved by the FDA for treating orthopedic injuries and are expensive but nonetheless available in clinics around the country.

First, he tried having his own stem cells harvested from his bone marrow and injected into his knee, but to minimal benefit. Then he heard about a treatment in Europe that deploys stem-cell secretions (that is, EVs) instead of the stem cells themselves. EVs were discovered about 30 years ago and have been studied more intensely over the past 15 years because of their therapeutic potential. Proponents say they appear to contribute to important biological processes, including tissue regeneration and neuroprotection.

Graham didn’t say in the video who recommended the clinic that provides the treatment, though chances are it was another athlete in North America, possibly even in the NFL. He decided to give it a try in a last-ditch effort to avoid surgery.

For the treatment, Graham had a fat graft taken from his abdomen in the United States and shipped to a clinic in London. There, the stem cells were isolated and placed in an oxygen-deprived environment to induce them to secrete EVs that might promote healing in damaged tissues. The secretions were multiplied in the lab for several weeks, then infused into Graham’s body intravenously, rather than being injected into the injury (as most stem-cell treatments are administered).

In the video, Graham said he was skeptical that the treatment would work but thought it was worth trying anyway. By his description, the infusion took only about 15 minutes from setup to finish, and immediately afterward he walked back from the clinic to his hotel. There, he watched a movie in his room, and to his surprise, when he got up after prolonged sitting, he walked pain-free for the first time since his injury.

Still, he remained wary and thought the real test would come on his long flight back to Miami followed by a hard workout. (Doctors at the clinic encouraged him to resume full activities immediately. One of the main consequences of the knee pain was that it prevented him from building up strength in his quadriceps that could relieve the stress on his knee).

“The first few weeks (after the procedure) there were a lot of anti-inflammatory effects,” he said in the video. “The top of my knee, my actual patella, none of that hurt anymore, and I was able to work out, I was able to go back into rehab and really build my quad up. It was pretty wild.”

Graham said his knee has been pain-free since. Also, his chronically sore back improved tremendously, and a medical scan showed that a slight tear in his other patella had healed. When he shot the video in January of this year, he said he was on his way to London for another EV treatment for the overall well-being of his body.

Graham clearly is convinced, or at least was as of January, that the treatment helped considerably, and that it was worth the cost.

“I went through the whole (2017) offseason, about three or four months, I played in another NFL season, and now I’m on the back end of that NFL season and actually I’m on my way to do stem cells again,” Graham said. “It’s something I’ll probably do for the rest of my career just from the results I’ve had personally.”

Now here’s the controversial side. Google stem cells and you’ll quickly find a contentious debate among researchers and doctors who study stem cells, and those who have been using them to treat patients. Many stem-cell researchers aren’t at all convinced that stem cells and their related treatments have proven effective or safe, at least not yet, and argue that their clinical use is potentially a huge waste of patients’ money at minimum, and possibly dangerous to their health as well.

I recently emailed three researchers who study stem cells in general and five others who are studying EVs in particular. All warned of the considerable risks in trying these unproven therapies and the unreliability of single-case results. They also emphasized that stem cells and EVs need to be studied far more thoroughly under government-regulated standards to determine their safety and efficacy.

One argument for the safety of EVs and stem cells is that they’re taken from the patient’s body, so there’s no risk of rejection. Another is that with an IV infusion in the case of EVs in this instance, there’s no risk of causing further injury from injections into the injury site.

But one of the researchers, Dr. Victor Khabie, the chief of sports medicine at Northern Westchester County (N.Y.) Hospital, said he’s treated patients who had sustained kidney and liver damage after undergoing IV stem-cell treatment, presumably caused by contamination of the stem cells or additives needed for the IV infusion.

“One patient that comes to mind had almost immediate relief of various orthopedic alignments after a similar therapy, followed by organ damage some months later,” Khabie said in an email.

“Bottom line, without scientific study and a better understanding the long-term risks of these type of treatments, they need to be used very cautiously.”

The field of EV study is an offshoot of stem cells and has shown enough promise that early this decade researchers established a society (International Society for Extracellular Vesicles) and journal (Journal of Extracellular Vesicles). But even those most enthused about the potential of EVs don’t think EVs should be used on patients except as part of an approved clinical study or when a patient has a life-threatening illness and no other options.

“The application (on Graham) you describe may have worked and the improvement might have been based on EVs,” said Bernd Giebel, a leading EV researcher at the Institute of Transfusion Medicine at University Hospital Essen in Germany. “However, I share the (critiques of the other) medical doctors. Very promising result from researches in the stem cell field or in the future of the EV field will lead to unproven therapeutic approaches. … For now, there are no international standards how to produce them and how to access the quality control. I share the view that the treatment you describe is very dubious.”

I spoke briefly with Andrew Chancellor, the CEO of the clinic (Wellbeing International) that performed the procedure on Graham. Aside from a bare-bones website, his clinic does no marketing and operates strictly on word-of-mouth recommendations.

He described the treatments in general terms, as shared above in the description of Graham’s procedure, and said about 40 percent of his clinic’s business is on patients with neurological disorders, 40 percent on professional athletes with orthopedic issues, and 20 percent on wealthy business people who live active lives and want to avoid surgery for injuries.

He wouldn’t say how much the treatment costs, but from our conversation, an educated guess is that it’s tens of thousands of dollars or more. As far as Chancellor knows, his is the only clinic in the world using EVs on patients, though there might be some in China.

So what does this leave us, the public, to think?

The price alone puts an EV-type treatment out of the reach of all but a small percent of us. And how can you ignore the warnings of the researchers who are on the front lines studying these things? Giebel said we’re probably at least a decade away from EVs becoming an approved treatment for anything.

But biologics — that is, taking cells from a person’s body, manipulating them and putting them back in — is one of the most promising fields of medicine today. One doctor for an NFL team that I contacted called it “the next horizon” in sports medicine.

Graham underwent the EV treatment and, based on his testimonial, is sold. He had 10 touchdown catches last season and played well enough that the Packers signed the 31-year-old free agent to a three-year, $30 million contract that included an $11 million signing bonus.

For Graham, the future of EVs is now.