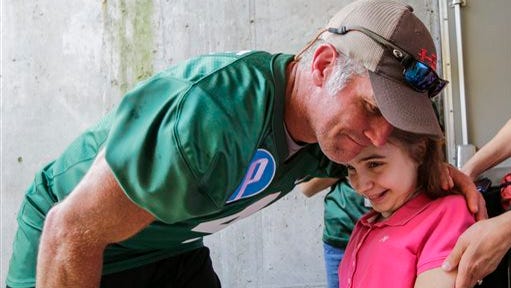 MADISON — The venue was different, but the scene was a familiar one for Brett Favre on Sunday afternoon.

The freshly minted Green Bay Packers Hall of Famer was back throwing passes in his green No. 4 jersey for the first time in eight years, leading his legends football team to a 38-32 win over Donovan McNabb’s All-Stars in front of 22,497 at Camp Randall Stadium.

However, Favre made it clear afterward that the experience wasn’t going to spur another NFL encore.

“I don’t believe I’ll be making a comeback,” Favre said. “My feet are killing me. But it was fun to be with the guys.”

The game ended a whirlwind weekend for Favre, who was inducted into the Packers Hall of Fame on Saturday night after seven years of separation from the organization. Prior to the ceremony, he became emotional when receiving a thunderous ovation from the 67,000 fans packed inside Lambeau Field.

It was a moving weekend for his entire family, who were greeted with roaring applause when they came onto the field minutes before Favre. His brother, Scott, said he knew the weekend was “going to be great, but we had no idea how great it was going to be until Saturday.”

Favre’s seven-year break with the Packers organization took a lot of twists and turns. At times, it appeared like a ceasefire might never happen. However, the end of the journey couldn’t have been more special or rewarding.

“That’s got to rank right up near the top,” said Favre of Saturday night. “The emotions were far greater than what I thought they were going to be. And that’s a tribute to the fans. It really is. Amazing.”

Scott was among the family members who were on the field during Favre’s ceremony at midfield amidst chants of “MVP,” “Go Pack Go,” and even “One more year.” Afterward, their sister Brandi posted some images and videos from the event on Facebook and friends back home stood in awe.

So was Brett. Although Scott could tell how nervous he was about the return at first, he saw his level of comfort grow throughout the weekend. By the time Sunday arrived, Brett was back in his element firing touchdowns to former teammates Dorsey Levens and Antonio Freeman.

And yes, even an interception to former St. Louis receiver Tory Holt.

“I think it made him a little at peace to come back and to get it done,” said Scott Favre, who also caught a pass from his brother. “There’s been that little feeling in there of animosity people think on both sides, but coming back I think it eased him a little bit. After last night, I’m sure he had to feel a great sense of relief because I know he was nervous and anxious, all that.

“He even said I didn’t plan on getting emotional out there, but how could you not? I was. I looked around and our whole family had tears.”

Favre said he hopes to bring the flag football game to Green Bay at some point in the future. The Packers denied permission to use Lambeau Field for the event this year, citing the repair needed to the playing surface following a Kenny Chesney concert on June 20.

RELATED:Favre hopes to be remembered as good man

On Sunday, Favre brought back many of his on-field antics. He slapped long-time center Frank Winters hard on his backside a few times and was throwing “rocket balls” to Scott and Freeman, who admitted that he had to “get adjusted to catching that Brett Favre fastball again.”

As for the nasty breakup in 2008, Freeman was confident Packers fans would embrace him at the ceremony and on Sunday. Whatever might be written on message boards or social media, the fans who gathered for his induction ceremony and football game were the voices that truly mattered.

Freeman, Favre’s teammate for eight seasons, felt honored to be a part of the crescendo.

“It meant a bunch,” Freeman said. “I couldn’t imagine how he felt not knowing what the reception was going to be. I just remember telling him before the event – ‘These are all Brett Favre supporters. This isn’t the new generation of Twitter gangsters and all of these IG thugs. These are all the real people before social media came out that love and adored and respect what you brought to the state of Wisconsin. And that is championship football.’”

There were a lot of accomplishments in Favre’s 16 years with the Packers, including three MVPs, back-to-back Super Bowl appearances and a Lombardi Trophy. Next year, he’ll likely add first-ballot Pro Football Hall of Fame selection to that list.

Still, the lasting memories from this weekend will go up there with all of them.

Favre’s next scheduled appearance in Green Bay comes on Thanksgiving Day against the Chicago Bears where he’s hopeful Hall of Fame quarterback Bart Starr will be able to join him in his No. 4 being added to Lambeau Field’s north end-zone façade.

A little “worn out just from emotions,” Favre said afterward he’s ready to go back to the tranquility of Mississippi for a little while.

“I'm ready to go back home and just kind of be normal,” Favre said. “Regardless of what people think, I don't really like this right now. I'd much rather be on my property kind of hiding out. November will be here before you know it. I really hope that Bart can be there, to celebrate that night with him.”