Packers' passes come up short in 2015

The Packers' dinking and dunking became so prevalent that the club broke new ground in 2015.

Packers' passes come up short in 2015 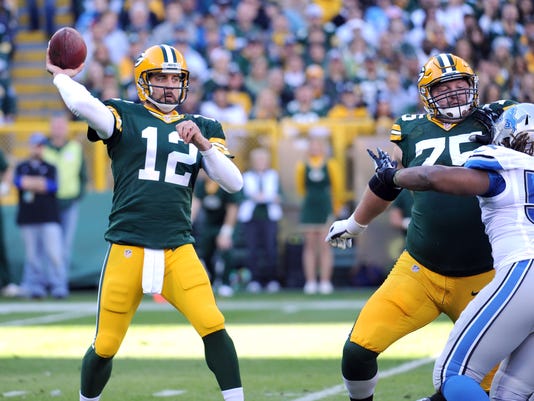 The Packers tied the franchise single-game record of 11 passes of 5 yards or fewer in an 18-16 setback against the Lions on Nov. 15, 2015.(Photo: Jim Matthews/USA TODAY NETWORK-Wisconsin)

Literally and figuratively, the Packers’ passing game came up short in 2015.

Green Bay, so adept at moving the ball downfield in recent years, spent a fair amount of time congregating near the line of scrimmage. Instead of setting sail on its usual number of long flights, the team often hopped and flopped like a bird with a bum wing.

The Packers completed 91 passes of fewer than 5 yards last season. Those distance-lacking gains accounted for more than a quarter (26.2 percent) of the team's 347 completions.

Aaron Rodgers threw 90 of them. Scott Tolzien tossed the other.

Green Bay’s dinking and dunking became so prevalent that the club broke new ground. Rodgers snapped Brett Favre’s record of 71 completions of fewer than 5 yards set in 2007. The team record also fell, a mark (75) established that same year by Favre and Rodgers.

Such sputtering was out of character. From 2008 through 2014, the Packers were often at or near the front of the V formed when 32 teams took flight.

Green Bay was built for distance. Its average yards per pass attempt (8.15) was unmatched with only San Diego (8.03) coming close.

Further, the Packers were the only team to maintain a passer rating of more than 100 (103.9) during those seven years.

Still, the team’s flurry of mini-completions didn’t take hold immediately. Not until the Packers were knocked from the ranks of the unbeaten did the skies truly begin to darken.

The frequency then increased as the team struggled to a 4-6 finish. During that stretch, the Packers stockpiled 67 short-range aerials.

Two games stood out. The team tied the franchise single-game record of 11 short balls in an 18-16 setback against the Lions on Nov. 15. It had 10 in a season-ending 20-13 loss to the Vikings.

As might be expected, 34 of their combined 44 were harvested during the final 10 games.

Those numbers won’t scare many defenses. Green Bay’s overall average per completion (10.99) was sixth lowest in the league.

RosterBuilder: Create your own 53-man roster

So, what’s not to like about throwing short? In the Packers’ case, at least, concerns centered on a scarcity of first downs, points and yards.

Only 13 of Green Bay’s 91 completions of less than 5 yards (14.3 percent) moved the chains. More than half (50) were part of drives that resulted in no points.

In all 91 cases, potentially longer gains were either turned down or not available at the time of the throw. Red flags should go up when a team consistently settles for less or lacks the ability to go get more.

This isn’t to say a team can’t win with some short stuff. Green Bay went 13-3 and captured a division title in 2007.

Problems surface when those little gainers make up more and more of a team’s output. The 75 of nine years ago accounted for 19.6 percent of the Packers’ 383 completions.

Under coach Mike McCarthy, Green Bay likes to take shots downfield. When it does stay closer to home, receivers are expected to maximize yards after the catch.

Perhaps the return of Jordy Nelson, out last season with a knee injury, or the influx of promising rookies will put an end to the turbulence. If not, expect more instances of 3 yards and a contrail of dust.

In 2015, Green Bay tied a franchise record (1994) with 19 completions that went for zero or negative yards. Eighteen of those occurred after Week 6.

Eric Goska is a Packers historian. Email him at aegoska@sbcglobal.net.

Seasons with the most completions of fewer than 5 yards in Packers history.