The Lions' futility at Lambeau ended in 2015, but Detroit hasn't swept Green Bay since 1991.

Clubhouse Live co-hosts Brett Christopherson and Ricardo Arguello make their prediction for the Green Bay Packers/Detroit Lions football game in their "Up North" segment of the show. (Sept. 23, 2016) 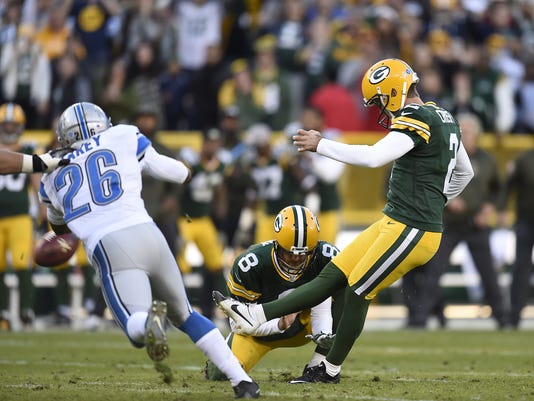 The streak was swept away last season.

More than two decades of losing was brushed aside in one afternoon. What had become an inevitable outcome was reversed by a team weary of serving as a punching bag.

Yes, in November the Detroit Lions finally won a football game in the state of Wisconsin. But another streak involving the two teams continues.

Last season, Detroit exposed the Green and Gold as mere mortals. On Nov. 15, Mason Crosby missed a 52-yard field goal as time expired and the Lions prevailed 18-16 at Lambeau.

All good things for one particular team eventually end. Still, there is one aspect to this series that began in 1930 that has some shelf life.

The Packers have engineered at least one win every season since. That’s quite a spell for a team to avoid being swept by a rival.

Win Sunday and Green Bay extends the streak another year. Lose, and victory will be necessary in Detroit on New Year’s Day.

Green Bay has held the upper hand against Detroit for nearly a quarter of a century. The Packers have swept the Lions 11 times since 1992. They have won the first meeting of the season 18 times.

Occasionally, the Packers have made defeating the Lions look relatively easy. In 2008, Detroit led for all of two minutes, 24 seconds in both games combined, and that brief advantage was all of one point.

A few times, things have gotten dicey. After the Packers lost the first game in 2005, a 28-yard Ryan Longwell field goal in overtime was required to salvage Game 2. Last year it took a 61-yard Hail Mary from Aaron Rodgers to Richard Rodgers with no time on the clock for Green Bay to squeak by 27-23 in Game 2.

That’s not too shabby.

But these are the Lions, you say. They are the league leader in regular-season losses (237) since 1992.

True. But that doesn’t minimize the Packers’ success. Their achievement can’t be discounted simply because the Lions haven’t been world beaters.

Detroit was not devoid of talent all those years. It had Barry Sanders, Herman Moore, Calvin Johnson, Jason Hanson and others.

At last check, the club remains a card-carrying member of the NFL. In this league, no team can be taken for granted and playing to the level of a lesser opponent is a real possibility, especially over a span of such length.

The Bears have tangled with the Lions as often as have the Packers. But Chicago’s record isn’t nearly as remarkable.

Chicago and Detroit are 24-24 in their last 48 regular-season games. The Lions have won the last six.

The Bears have swept the Lions seven times since 1992. But — get this — Detroit has returned the favor seven times.

So, don’t shortchange the Packers. Their avoidance of the broom is impressive and it is within hailing distance of a record.

Green Bay’s run of 24 years without being swept has been bettered by only one team. And the Packers played a role in that long-running show as well.

The Bears dealt Green Bay at least one loss every year from 1936 through 1960. That’s 25 consecutive years of sidestepping a sweep.

It’s the longest run by one team in a series not interrupted by a layoff. The Vikings strung together 28 straight years of avoiding a sweep against the Lions (1963-90), but only one game was played between the teams in the strike-shortened 1982 season.

So savor this streak. Extended engagements like this one don’t come around all that often.

The Packers' previous longest run against the Lions was 18 years without being swept from 1932 through 1949.

The Lions' longest stretch against the Packers was 11 straight years without being swept (1948-58).

Teams that logged the most consecutive years without getting swept by a rival in a home-and-away series uninterrupted by layoff.