Improved run defense steps up in 2nd half

For the Packers, the tide turned after the bye week

Improved run defense steps up in 2nd half

The Packers capped their impressive second-half-of-the-season turnaround in defending against the run with a thrilling 30-20 victory over the Lions at Lambeau Field.

Sunday's outing was not the Packers' best effort against the run. By halftime, Detroit was averaging a robust 5.2 yards per carry on 15 attempts for 78 yards.

But the unit, like Green Bay's offense, got a boost from the return of Aaron Rodgers. The limping quarterback orchestrated a 7-play, 60-yard touchdown drive in the third quarter that put the Packers up 21-14 and caused the Lions to all but abandon the run.

Joique Bell was a thorn in Green Bay's side early. The running back collected four rushing first downs to go with 58 yards on 11 tries in the first half.

Reggie Bush chipped in 17 yards. He had Detroit's other rushing first down on a 14-yard jaunt in the second quarter.

The running of Bell and Bush was cause for concern. Their success may have had some in the stands flashing back to earlier in the season.

The Packers of 2014 can be split in two as far as defending the run. In the first eight games, the team ranked last in the league in rushing yards given up. In the second eight games, the club engineered an about-face unlike any in franchise history.

Green Bay's allowance during its first eight games was it highest since the 1983 team gave up 1,322 yards. But even that trampled-upon outfit didn't permit an average per carry (4.29) as high as its 2014 counterparts did through the first half of the season.

Green Bay Packers receiver Randall Cobb (18) races towards the end zone after making a catch in the third quarter during Sunday's game against the Detroit Lions at Lambeau Field. Cobb scored on a 13-yard reception. Evan Siegle/P-G Media
Fullscreen

Green Bay Packers receiver Randall Cobb (18) reacts after making a catch for a touchdown in the third quarter during Sunday's game against the Detroit Lions at Lambeau Field. Cobb scored on a 13-yard reception. Evan Siegle/P-G Media
Fullscreen 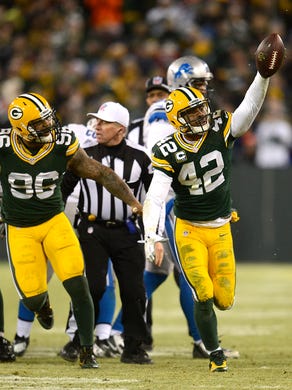 Green Bay Packers quarterback Aaron Rodgers (12) signals for a first down against the Detroit Lions during the Week 17 game at Lambeau Field. Evan Siegle/P-G Media
Fullscreen

Green Bay Packers' Aaron Rodgers is carted of the field after injuring his left leg in the second quarter. Wm.Glasheen/P-C Media
Fullscreen

Green Bay Packers quarterback Aaron Rodgers (12) lays on the ground after getting injured in the second quarter during Sunday's game against the Detroit Lions at Lambeau Field. Evan Siegle/P-G Media
Fullscreen

Green Bay Packers quarterback Aaron Rodgers is helped off the field after being injured in the second quarter of the game against the Detroit Lions at Lambeau Field. H. Marc Larson/Press-Gazette Media/@HMarcLarson
Fullscreen 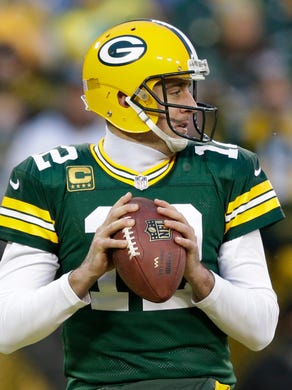 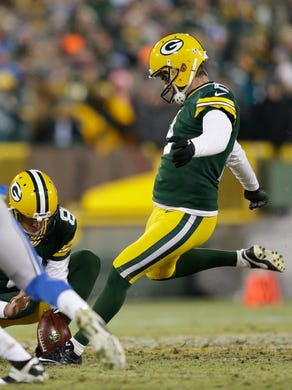 Green Bay Packers defensive end Josh Boyd, left, and Jarrett Bush are all smiles as they leave the field at the end of the game. Dan Powers/P-C Media
Fullscreen

Micah Hyde (33) returns a punt for a 55-yard touchdown during Sunday's game against the Detroit Lions at Lambeau Field. Evan Siegle/P-G Media
Fullscreen

The Packers and defensive back Micah Hyde have had plenty to cheer about during their recent winning streak. Evan Siegle/USA TODAY NETWORK-Wisconsin
Fullscreen

For the Packers, the tide turned after the bye week. In playing the Bears for a second time, Clay Matthews started at middle linebacker and Chicago was held to just 55 yards on 24 attempts.

In the seven games leading to the rematch with the Lions, the Packers gave up 580 yards rushing. Only the Vikings (112) and Bills (113) rushed for more than 110 yards against them.

Detroit tested Green Bay early Sunday. The Lions had seven runs of more than 5 yards in the first half.

But the Packers had their moments. Matthews tackled Bell for minus-4 yards in the first quarter. Letroy Guion and Mike Daniels stuffed him for a loss of 1 in the second quarter.

Once Rodgers put Green Bay in front for good, the Lions lost their roar. Stafford was the lone runner, gaining 28 yards on three attempts including a botched handoff intended for Bell that Morgan Burnett recovered.

Green Bay allowed 691 yards over the second half of the season. That's just 56.27 percent of what it permitted in the first half.

No Packers team has rebounded so dramatically. The 1972 team comes closest.

That year, Dan Devine's team was gouged for 940 yards in the first seven games. It tightened up considerably as opponents managed 577 yards down the stretch or 61.38 percent of the earlier allotment.

Yes, the Packers' run defense is far from perfect. But perhaps it has improved enough to give the team a fighting chance in the playoffs.

Bell and Stafford each had runs of 18 yards against the Packers. Green Bay has not surrendered a run of 20 or more yards in eight straight games, a feat it last accomplished in 2006.