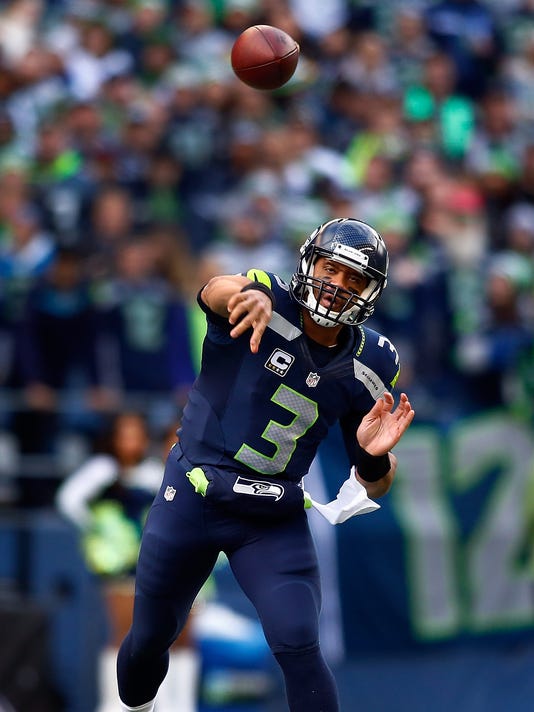 Who is the highest-rated passer in NFL postseason history?

For decades, the answer to that question was almost always Bart Starr.

Last Sunday, Russell Wilson usurped the title. The Seattle quarterback exceeded the minimum number of attempts needed to qualify and leapfrogged to No. 1.

The Packers and Seahawks meet Sunday to decide the NFC championship. Should Green Bay desire to knock Wilson from his newfound perch, it will have to defend the pass better than it did a week ago against Dallas.

The "1986 NFL Record and Fact Book" was the first to include the postseason record "highest passer rating, career." Starr, with a mark of 104.8, was listed first, well ahead of second-place Ken Anderson at 93.3.

Starr held that spot in 24 of the 28 editions that followed. In the most recent, he was more than a point ahead of runner-up Aaron Rodgers (103.1).

It's remarkable that Starr held on so long. Passer ratings have risen (on average) by more than 10 points since 2000 alone.

Troy Aikman (1993-94) and Rodgers (2011-12) toppled Starr briefly. But both slid backward as they learned that playing at this level in the postseason is not easy.

Wilson is the latest to climb the mountain. It remains to be seen if he can hang on.

The 75th player selected in the 2012 draft has played in six playoff games. He's experienced the agony of defeat just once.

Wilson led Seattle to an 11-5 record as a rookie. His Seahawks defeated the Redskins 24-14 in a wild-card game before falling 30-28 to the Falcons in the divisional round.

In order, he posted ratings of 92.9 and 109.1. In Atlanta he rallied from a 20-point deficit to put Seattle up 28-27 only to see the Falcons kick the game-winning field goal 23 seconds later.

He threw his only postseason interception that day on the game's final play.

Last year, Wilson piloted the Seahawks (13-3) to a Super Bowl championship. After an unimpressive start in a 23-15 divisional-round victory against the Saints (67.6), he hit triple digits against the 49ers (104.6) in the NFC championship, then clocked in at 123.1 against the Broncos on pro football's greatest stage.

Wilson was a world champion. What he wasn't was the postseason passing champ as his rating (102.0) and number of attempts (130) fell short of Starr's record and the required 150 throws.

He punched his ticket last week with a superb performance in Seattle's 31-17 triumph over Carolina. He fired three TD passes and averaged 12.2 yards per attempt in compiling the 10th highest passer rating (149.2) in a playoff game since 1960.

Wilson was unstoppable on third down. He completed all eight of his throws for 199 yards and three touchdowns, the longest a 63-yard hookup with receiver Jermaine Kearse that put Seattle in the lead for good.

That offensive outpouring upped Wilson's career rating to 109.6. And it might jump again if Green Bay's defense, which yielded a 143.6 to Tony Romo, doesn't tighten up Sunday.

The Packers could help their cause with an interception or two. Turnovers end drives, and those that come through the air will negatively impact Wilson's passer rating.

Three years ago Green Bay led the league with 31 interceptions. This season they had 18 and not-a-one last week against Dallas.

When the Seahawks and Packers met in September, Dom Capers' unit failed to intercept Wilson. They also were memorably denied in the infamous Fail Mary game of 2012.

Perhaps Wilson is due to throw one. After all, he hasn't been intercepted in his last 90 playoff attempts.

Green Bay can only hope so. The Packers under coach Mike McCarthy have struggled on the road during the regular season (4-16) when they fail to come away with at least one interception.

They're even less fortunate in the postseason, a problem that dates to their playoff loss to the Bears in 1941. Green Bay is 0-5 on the road when it can't get its hands on at least one enemy pass.

So forget intercepting Wilson in order to knock his passer rating down a notch or two. The Packers need to swipe a Seattle pass or two because their season likely ends at CenturyLink Field if they don't.

Once a Seahawk, now a Packer

Once a Packer, now a Seahawk