Matthews ready to put thumb injury behind him

Matthews ready to put thumb injury behind him 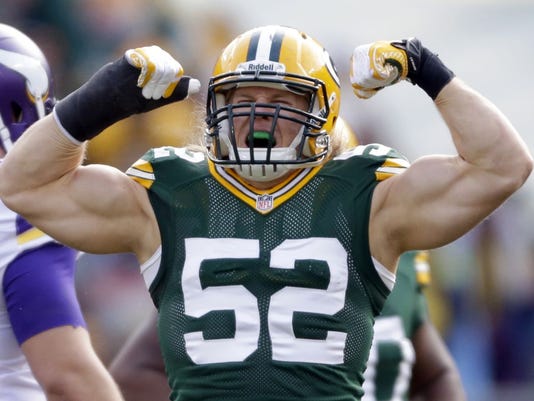 Clay Matthews was back on the field Saturday, but wore a protective splint on his right hand to protect his surgically repaired thumb.

Now seven months removed from surgery, the Green Bay Packers outside linebacker isn't sure if he'll wear the brace all season, but believes it gives him the range of motion needed to be effective.

Matthews missed six games last season (including playoffs) with a twice-broken thumb, which required surgery both times. He missed the entire offseason program before being cleared by team doctors on Friday.

When asked about the possibility of a third break, Matthews said he's not concerned. In his workouts, he said he no longer needs any kind of protective brace or support.

"In doctoring, there are no such thing as percentages or letting people know it's not going to happen again," Matthews said. "It's one of those things I'm going to have to deal with. But I'm hoping that through the continued rehab I have as well as strengthening and (gaining) confidence while in the game that I should get to the point where I don't think about it and, fingers crossed, hopefully it is strong enough."

The Packers structured their offseason philosophy around a flexible defense that can rotate 15 or 16 players deep at any given moment, but Matthews and recently signed veteran Julius Peppers remain at the center of the team's pass rush.

Greater depth at the position should allow defensive coordinator Dom Capers to move Matthews around more frequently and get more creative with the play-calling with different looks to better blend personnel.

Matthews is all for it. The Packers still are waiting on Mike Neal (abdomen) and Nick Perry (foot/knee) to return from the physically unable to perform list, but Packers coach Mike McCarthy said both players are close.

Although the Packers' sack totals were near the top of the league last season – they tied for eighth-most with 44 – they struggled to maintain a consistent pass rush.

"I think the problem that it presents for the offense is so many moving piece," Matthews said. "It allows me to use a multitude of my weapons and not just lining up in one spot rushing the passer."