He'll make $14.25 million this year as part of new contract signed over the weekend 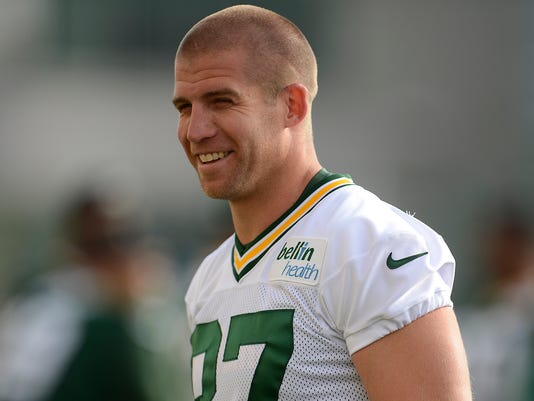 In exchange for a large first-year payout of $14.25 million, the Green Bay Packers will get Jordy Nelson for a palatable $7.68 million over the next three years as part of the contract extension the receiver signed over the weekend.

There's no best way to determine the value of an NFL player's contract, but among the most valuable are the amount of money totally guaranteed, as well as the amount the deal pays in the first two and three years. The later-year salaries are less important because players often don't get to them -- teams either cut them or ask them to take a pay reduction because the player has aged and isn't performing at the level he did when he signed the deal.

By those measures, Nelson will be well paid as far as money that's guaranteed explicitly or de facto, and for the first three years he'll make good but not top-end money. Nelson agreed to the deal presumably as a hedge against the risk of getting injured or seeing his performance diminish, and at age 29 he was willing to sacrifice some money over three years to get as much as he could this year.

According to a source with access to NFL salary information, Nelson's official guaranteed pay is his $11.5 million signing bonus. But he'd already made a $250,000 workout bonus and essentially is guaranteed his $2 million base salary because the Packers aren't going to cut him this year. So his real guarantee is $13.75 million. He can make another $500,000 this season in roster bonuses -- $31,250 for each game he's on the 46-man game-day roster.

So this year Nelson will make anywhere from $13.75 million to $14.25 million, which is the third-highest total of any receiver this season, behind only Miami's Mike Wallace ($15.05 million) and Chicago's Brandon Marshall ($15 million).

By comparison, Marshall like Nelson had one year left on his contract when he signed an extension earlier this offseason. Marshall, who is 30, received a $7.5 million bonus and will make $15 million this year in salary and bonuses, or only slightly more than Nelson.

Nelson's former teammate Greg Jennings last year had the leverage of free agency when he signed with Minnesota. Jennings received a $10 million bonus, $13 million in the first year and will make $18 million in the first two seasons. He's scheduled to make $9 million in '15, which makes for $27 million over the first three years, though by the start of the '16 season he'll be 33 and in danger of being released because of age and cost.