Micah Hyde thought he had the pass swatted away. 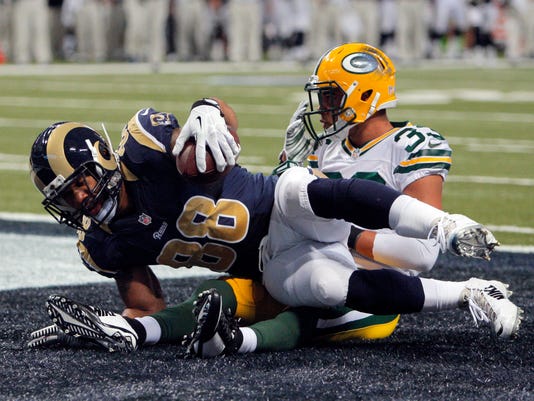 Micah Hyde thought he had the pass swatted away. The Packers safety draped over St. Louis tight end Lance Kendricks in the end zone at Edward Jones Dome, closing every conceivable passing angle.

Rams quarterback Sam Bradford had just enough space – maybe a few cubit inches – to thread a perfect pass past Hyde for an 11-yard touchdown Saturday. It was the lone score Green Bay allowed in its second preseason game, a 21-7 win over the Rams.

"I feel like I could've possibly made a better play on it," Hyde said Monday. "I just missed the ball. But, at the same time, my leverage was right. (Kendricks) slipped inside. When the play was happening, I was like, 'There's no way he's getting this in there. There's no way.' He's a $100 million quarterback for a reason, and the tight end made a good catch.

"I felt like I might've been half a second late. It was just right over top of me, and I barely missed the ball."

Never good for a defensive back to allow a touchdown pass, especially for a safety locked in an intense position battle. It's either Hyde or first-round pick Ha Ha Clinton-Dix who will start at safety opposite Morgan Burnett when the Packers travel to Seattle for their season opener Sept. 4.

While Hyde allowed a touchdown, Clinton-Dix recorded his first NFL sack on a second-half blitz. On Monday, Clinton-Dix had two interceptions in practice – his first two of camp. The rookie is settling in, the game slowing down.

Regardless, there's a long way to go in the competition at safety. The lone touchdown Saturday will likely have a limited effect on the race.

"These guys get paid too," Hyde said of the Rams. "You've got to make some plays. You've gotta move on. I'm not going to give up a touchdown and say it's OK. I'm not that type of player, but at the same time you've got to learn from it, and you've got to move on, or else it's going to come back to strike for the rest of the game."