Packers confident they can stop the run

Packers aren't giving up on their personnel on the defensive line despite run defense's slow start.

Packers confident they can stop the run 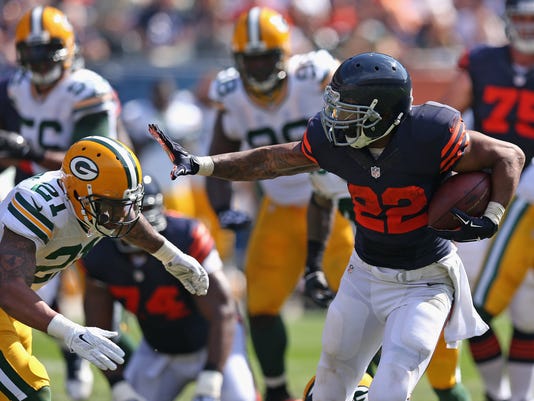 Bears running back Matt Forte tries to avoid a tackle by Ha Ha Clinton-Dix during the first quarter at Soldier Field.(Photo: Getty Images)

This isn't the start the Green Bay Packers envisioned for their run defense, but the coaching staff believes they have the necessary personnel to rebound from their early struggles.

The Packers traded in Ryan Pickett, Johnny Jolly and C.J. Wilson this offseason to build around younger, more athletic linemen in hopes of improving the NFL's 25th-ranked run defense.

Instead, the Packers find themselves last in the league in the category. The rotation of Mike Daniels, Letroy Guion, Josh Boyd, Datone Jones and undrafted rookie Mike Pennel has given up 176.0 rushing yards per game through four games this season.

The loss of B.J. Raji to torn right biceps dealt a heavy blow to the defense, but the Packers aren't wavering about the state of their line even after allowing 235 rushing yards in Sunday's 38-17 win over the Chicago Bears.

"Absolutely. I really do," said defensive line coach Mike Trgovac when asked if he believes the Packers have the personnel needed to stop the run. "We just have to be more consistent with it. That's the biggest thing, but I absolutely think we have the right personnel to stop the run."

The Packers are in for another stiff test this Thursday against Minnesota. Adrian Peterson's off-the-field issues might have left the Vikings without their All-Pro running back, but youngsters Matt Asiata and Jerick McKinnon have combined for the NFL's eighth-best rushing offense (134.8 ypg).

Neither Clay Matthews nor Julius Peppers could remember either running back by name, but the veterans took notice of the 213 rushing yards Asiata and McKinnon combined for in Sunday's 41-28 win over the Atlanta Falcons.

Trgovac and defensive coordinator Dom Capers understand the Packers' dead-last ranking against the run doesn't look good. At the same time, it's not the primary number they use to gauge success of their run defense's production.

In his position room, Trgovac preaches more about opposing team's yards per rushing attempt where the Packers sit 23rd in allowing 4.6 yards per attempt. So far, the Packers have faced the run (153 attempts in four games) more than any other team in the NFL.

Rain or shine this Thursday, they're counting on seeing more of it.

It's not just the defensive line, either. All across the board the Packers have made it an emphasis this week to slow down opposing offenses that are determined to pound the ball.

A turnaround starts against the Vikings.

"We're going to get it fixed," Peppers said. "We're going to keep working on it. It's an ongoing process and we're just going to work on the details and keep getting better at it."