Packers want to get running back James Starks more involved. 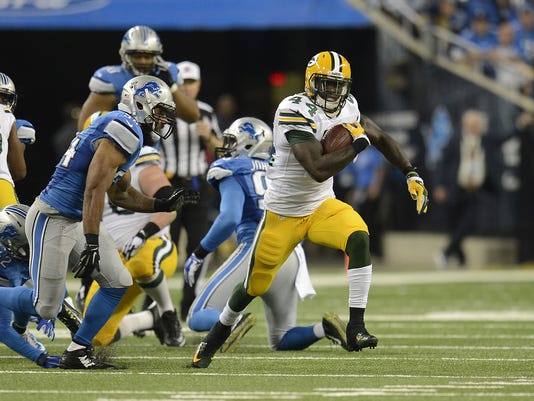 For the second time in three games, James Starks didn't have a single carry during Sunday's 38-17 win over Chicago.

In fact, the Green Bay Packers' fifth-year running back played only one offensive snap.

No, that wasn't a part of the game plan.

"Frankly, that's poor management by myself," Packers coach Mike McCarthy said. "That shouldn't happen. I think the game's obviously different, the way it sorted out. We didn't have a lot of long drives but that's not the focus.

"James Starks should touch the football every single game. That will not happen again."

While Eddie Lacy and the run game has struggled through the first month of the season, Starks has been productive with the limited snaps he's received. He's averaging 5.0 yards per carry on 15 attempts this season and actually led the Packers in rushing in both the games where he's received at least one carry.

The Packers still are trying to establish an identity on the offensive side of the ball. In need of a victory, they aired the ball out against the Bears' inexperienced secondary and were in scoring position on all eight of their possessions.

As the season wears on, the Packers know they'll need to get Lacy and their 27th-ranked rushing offense going again. Lacy has 53 carries for 161 yards and a touchdown this season, which is more than 100 yards behind his production at this time last season.

The Packers re-signed Starks to a two-year contract in wake of his best professional season in 2013 (89 carries for 493 yards and three touchdowns, but the Packers' desire to run a no-huddle has led to the offense sticking with mainly one back per series.

Gunning for an offense that runs 75 players per game, McCarthy is also looking for the run game to get north of 30 attempts. Through four games, the Packers are averaging 55.8 offensive plays per game and 20.8 carries.

"We didn't run the ball real effectively," quarterback Aaron Rodgers said. "Sometimes it's going to happen when you throw it so well but we've got to be able to close out games running it a little more effectively. We've got to find ways to get Eddie more touches and more involved, and James as well."

Actions will speak louder than words, though. Before his career-ending neck injury, the Packers kept saying they wanted to utilize 2013 fourth-round pick Johnathan Franklin more offensively, but never did.

Franklin had one 13-carry, 103-yard performance in place of an injured Eddie Lacy and James Starks in a Week 3 loss to Cincinnati before seeing only another six carries over the Packers' next eight games.

"It was an anomaly, just the way it worked out," offensive coordinator Tom Clements said. "He will get his touches. He deserves it, he's played well, he's run hard, he's been effective. We need to get him in there."