Ponder's been up and down against Packers

With Teddy Bridgewater a game-time decision, Christian Ponder remains on call for the Vikings.

Ponder's been up and down against Packers 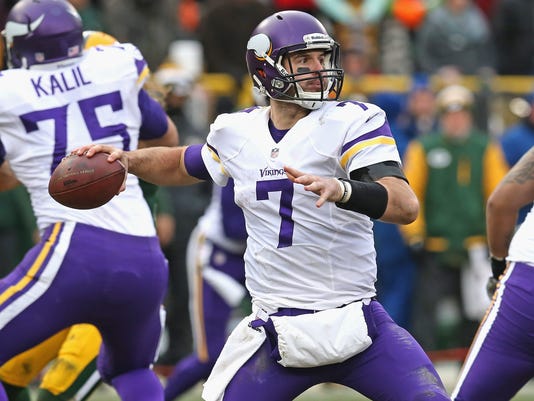 Minnesota Vikings quarterback Christian Ponder looks to pass against the Green Bay Packers at Lambeau Field on Nov. 24, 2013. The game ended in a 26-26 tie.(Photo: File/Getty Images)

The Green Bay Packers could be in for another helping of Christian Ponder.

ESPN's Adam Schefter reported Thursday morning that early signs point to the fourth-year quarterback starting tonight at Lambeau Field in place of an injured Teddy Bridgewater, who sprained an ankle in Sunday's 41-28 win over Atlanta.

NFL Network's Ian Rapoport added that the Vikings likely would take a decision on Bridgewater up to 90 minutes before kickoff, the deadline to submit game-day inactives.

But at about 5 p.m., USA TODAY's Tom Pelissero and other media outlets, including ESPN and NFL Network, were reporting that Bridgewater would be out, and that Ponder would start.

Sound familiar? It should. Less than two years ago, Minnesota took a similar approach with Ponder's triceps injury before starting converted-receiver Joe Webb. Aside from the first series, Dom Capers' defense never looked better in the Packers' 24-10 win, their lone playoff triumph since Super Bowl XLV.

Packers coach Mike McCarthy said earlier this week he was expecting Bridgewater to play, but the team has game-planned for multiple scenarios, especially because the Vikings have a first-time head coach in Mike Zimmer and have lost their original starting quarterback Matt Cassel for the year with a broken foot.

"It's more about concepts, it's not more about individuals," McCarthy said earlier this week. "You can't sit there and guess who is going to be the quarterback in Week 5 based on the way they went into training camp. It's more conceptually on what you want to do schematically."

Ponder is a more capable backup option than Webb, who's now holding a clipboard in Carolina. His numbers still aren't great against the Packers: a 1-4-1 record and 76.6 quarterback rating off 92-of-170 passing for 1144 yards, seven touchdowns and five interceptions.

However, Ponder has fared better as of late. All five of his picks came in his first three games against the Packers where he had a 50.8 quarterback rating. The Vikings lost all three games.

Ponder is 1-1-1 in his last three starts against Green Bay and thrown the ball considerably better. He's fashioned a 105.0 quarterback rating in completing 51-of-79 passes (64.6 percent) for 612 yards and four touchdowns without a turnover.

Part of that production has been a product of the Packers' inability to stop Adrian Peterson, who had 405 yards and three touchdowns on 79 carries (5.1 average) in those games. At the same time, Matt Asiata and Jerick McKinnon have been component pair in his stead.

Even if Ponder starts in place of Bridgewater, it'll still be interesting to see which side of the Vikings' backup quarterback shows up.

Despite the upheaval, the Packers remains 9-point favorites, according to Bovada.

Here's a look at Ponder's history against the Packers: